The Manipulated Takeover of the USA Economy & The Whole World ~ The Deliberate Creation Of The 1929 Great Depression ! 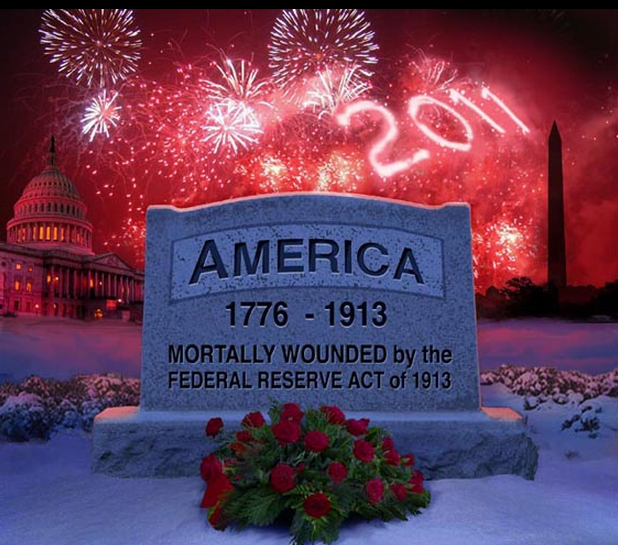 Federal Reserve Act: the most Influential Act
in US/World History since the Constitution
The name of Central Bank is carefully avoided, but the ‘Federal Reserve Association’,
the name given to the proposed central organization,
is endowed with the usual powers and responsibilities of a European Central Bank."
-- Nation Magazine, January 19, 1911
The Federal Reserve Act was proposed in 1908 by
Nelson Aldrich - whose unique daughter married unique Rockefeller's son -
in the Aldrich-Vreeland Act after the Panic of 1907
The Act created the "Federal Reserve System"
which transferred control of the money supply from Congress to the banking system.
Though the Treasury still coins and prints our money under the authority of Congress,
neither the Treasury nor the Congress has the slightest thing to do
with its issue or regulating the value thereof.
The Act was signed by President Woodrow Wilson -
under the influence of Colonel House - founder of the CFR (controlled by Rockefeller) -
on December 23, 1913 during the night ! When All Were Sleeping?
eighty years after President Jackson repelled the charter of
the Second Bank Of United States.

The Federal Reserve Act was scheduled during the unlikely hours
of 1.30 am to 4.30 am -
were most members probably sleeping ? -

on Monday 22 December 1913, at which 20 to 40 substantial differences in
the House and Senate versions were supposedly described, deliberated upon, debated, reconciled and voted upon in a near-miraculous
four-and-a-half to nine minutes per item, at that late hour.
At 4.30 am, a prepared report of this Committee was handed to the printers.
Senator Bristow of Kansas, the Republican leader,
stated on the Congressional Record
that the Conference Committee had met without notifying them,
and that Republicans were not present and were given no opportunity
either to read or sign the Conference Committee report.
The Conference report is normally read on the Senate floor.
The Republicans did not even see the report.
Some senators stated on the floor of the Senate that they had no knowledge
of the contents of the Bill.
At 6.02 PM on 23 December, when many members had already left the Capital
for the Christmas holiday,
the very same day that the Bill was hurried through the House and Senate,
President Woodrow Wilson signed the Federal Reserve Act of 1913 into law.
The Federal Reserve
"Today the government is actually run by the money cartel.
Big business holds all the cards, because its affiliated banks have appropriated
the power to create money for themselves.
These giant cartels can be brought to heel only by cutting off their source of power
and returning it to its rightful sovereign owners,
the people and their representative government.
The problem with the current monetary scheme is not that the government
is irresponsibly running the printing presses but that private bankers
are covertly engaged in that practice.
Bankers have monopolized the business of issuing and lending the
national money supply, a function that the Constitution delegates solely to Congress.
What hides behind the banner of "free enterprise" today is a system in which
giant corporate monopolies have used their affiliated banking trusts
to generate unlimited funds to buy up competitors, the media,
and the government itself, forcing truly independent private enterprise out.
Big private banks are allowed to create money out of nothing, lend it at interest,
foreclose on the collateral, and determine who gets credit and who doesn't.
They can advance massive loans to their affiliated cartels and hedge funds,
which use the money to raid competitors and manipulate markets.
If some players have the power to create money and others don't,
the playing field is not 'level' but allows some favored players to dominate
and coerce others. "
-- Ellen Brown from the book Web of Debt

There is a disturbing amount of evidence that our problems don't just extend
to the private corporate banks,
but that in fact the entire World Banking System exists not to enrich humanity
but to enslave humanity beneath its debt.

While I certainly cannot claim to know the motivations that guide
those behind the institutions currently in power,
I can however investigate their history and their actions.

"Before the passage of this Act [the Federal Reserve Act], the New York Bankers
could only dominate the reserves of New York.
Now, we are able to dominate the reserves of the entire country. "
-- Nelson Aldrich, Senator and author of the Federal Reserve Act (1913)
The United States Federal Reserve was created in 1913 by an act of Congress.
It is privately owned, although who the owners are is a closely guarded secret.
It has tremendous power over the US economy mainly because
it can manipulate interest rates at will and either add money or remove money
from circulation.
Like all banks, it has the power to create money from thin air,
but unlike other banks it can do so with no restrictions whatsoever.
It meets in secret and its actions cannot be controlled by Congress
or any other government body.
It has no budget.
It has never been audited.
The central banking system began in England, spread to the rest of Europe
and the United States and now dominates the money system
of almost all countries in the world.

Income Taxes
The Federal Reserve Act was actually passed as a package deal with the
16th Amendment to the Constitution, the Federal Income Tax.

Before the 16th Amendment government could only tax apportioned items.
This means every tax dollar collected had to have a specific purpose,
for example a gas tax to build highways.
This new income tax could be used for anything the government wanted.

The US government existed for almost 150 years
without the need for an income tax.
But now that we had a central bank,
the bankers who owned it needed a way to secure its interest payments,
hence the income tax.
In fact a large portion of income taxes collected today go to pay the interest
on the national debt owed to the Federal Reserve and our many foreign creditors.

The reason why the income tax is an "unapportioned tax"
is because the government couldn't really tell the people:
"Hey we're going to need to take some of your income every year
to pay a bunch of private bankers we borrowed money from."

What about the gold standard?
Some people (including Ron Paul and the makers of this video)
assert that a gold standard will be our savior.
Unfortunately, this won't work out too well since it will just give the people
with the gold all of the power.
To assert gold is real wealth is almost as silly as saying paper money is wealth.
We do need some sort of standard however.

Cheering Up Is One Thought Away,to be Embraced Infinitely.

The Knowing We Are Infinite Now..