Some books help to change our lives. If you value your future then consider the wisdom that shines through the pages of this book. Here are a couple of passages that I hope will make you sit up and think.

Take a look down Memory Lane with the technique of using our five physical senses to help make each experience unique and very enjoyable. This is all about your memories so don't be shy and share what, in essence,…

Staying with my philosophy that everything I post is meant to be shared, find below the link to a script for a short meditation that I wrote about ten years ago. Feel free to use this either in its existing format or change it any way that suits your requirements. All you need to add is some suitable relaxing music and a creative mental environment for this type of meditation. Such activity is now becoming more commonplace where meditations can take place with small groups in the home or… 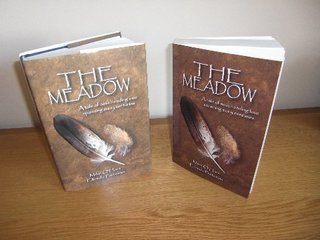 So far I have not come across one piece of bad publicity regarding "The Meadow" novel. In fact most comments lean towards the positive, such as this testimonial posted from a sister network.

Here is the opening passage to this testimonial:

"I am close to finishing reading The Meadow, by our own Mike O'Hare and Elfreda Pretorius.  This novel is by far the most…

THE MEADOW PROMOTED BY VIDEO

This blog is all about promoting The Meadow on YouTube. It was created with the idea of story going viral with the help of a video -- or two or three lol. See "A great love story -- presented to you by… Continue WHO IS JASPER T. NICOLI?

"In the beginning I would have said that Jasper T. Nicoli is the alter ego of Mike O’Hare, co-author of “The Meadow“. However, due to many strange experiences over the last few years, I’m convinced that this is a person, albeit no longer existing as a living and breathing human being."

Please read on at my blog page … FANGS FOR THE MEMORIES

Share with me my memories from the late '60s when I was holidaying on the island of Tenerife. These memories are much more than just lying on a beach or swimming in the sea. Here's a hint at what I encountered and all the fun which surrounded my adventures as I covered the island from north to south. Ouch lol!! LIBRARIES UNDER THREAT OF CLOSURE

It may not be happening in your neighbourhood yet, but if the UK manage to close down all of its branch libraries because of so-called cost cutting, it could happen anywhere. Please support this by sharing with others.

One of the major contributions which determines and distinguishes a great movie from a not-so-great movie is location. When moving home, it’s all about location, location, location. We live in a three-dimensional world with great emphasis put on the material aspects of life. So why not make the most of it? Being there (location) is what triggers our five natural senses so that we can experience – and enjoy – the environment. Our emotions complete the job in hand and help us to tread new paths… Continue

A POEM TO COMMEMORATE THE FOURTH ANNIVERSARY OF THE TSUNAMI

I wrote this short poem just after the Tsunami hit back in 2005. As it's the fourth anniversary, I thought it was appropriate to post it here.

I cling for life at rooftop height
The stars begin to show the night
Daytime comes, the… Continue

MEADOWMANIA -- GOOGLE, ARE YOU WATCHING?

THE MEADOW by Mike O'Hare and Elfreda Pretorius. Available at most of the usual book outlets, including Amazon, Barnes and Noble, Borders, Chapters etc. There is a whole new world created when the marketing machine gets into gear. Here's where it's important to get the right image and interest going with the intention of creating a sound or an image that will stick. Of course, once the book has been read, everything changes course and a more subtler approach is… Continue