Corporatocracy Systematically Destroying the Way of life here in America

The biggest scam of the century is making a full conclusion with this deep recession. What made America the envy of the entire world, a strong and vibrant middle class, is being quickly dismantled so the new
order of corporate raiders can siphon off life support from the
productive economy. Nothing highlights this grand robbery more so than
the current situation of our country. For eight straight months
foreclosure filings have hit 300,000 or more yet banks on Wall Street
are gearing up for record yearend bonuses for a job well done. The average
American is seeing the culmination of 40 years of systematic
leeching by the corporatocracy that culminated in the largest transfer
of wealth in modern history. A bloodless coup that cemented the true
nature of our current economic system.

People wonder why I focus so much on the middle class of America. This is what has been the fundamental difference between our country and other economic systems. A vibrant middle class
that provided adequate housing, a decent education, and a road to
sustainable wealth. This was built on the backs of a productive
economy. But over the last 40 years we have seen much of the true
wealth shift to Wall Street and the financial sector and that has
largely eroded the value of what it means to be middle class. The new
system is designed for the few and by the few. The new financial
regulation being touted as the most sweeping since the Great Depression
is woefully weak. Yet this is merely a reflection of the power of the
corporatocracy. We really have the best government money can buy.

Critics always point to the rising household wages since the 1970s. Yet there is a big problem with this argument since this has occurred with the growth of the two income household: 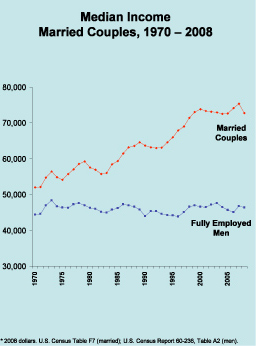 If we factor out men from the data, the average American male is now making $800 less in inflation adjusted terms than his counterpart in 1970. So even though income for households has
gone up the data is misleading. Americans now have a harder time
keeping the pillars of middle class life intact. If we had to sum it up
it would probably be:

-A good home to raise a family

The above is still accessible but it has become harder to maintain. A solid pension and healthcare used to be provided to workers by companies. That is now gone. Income is only one side of the equation
of course. Where do people now spend their money? If we look at the
data closely Americans now spend less in clothing, food, and appliances
than their 1970s comparison group. This has much to do with cheap goods
from abroad and more competition globally. So this is good right? It
is but these are more of the smaller line item purchases that Americans
make. The biggest purchases include housing and this is a cost that has
gone up exponentially: 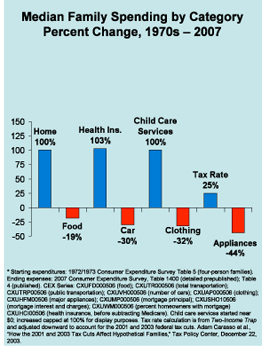 Housing has gone up 100% in terms of cost for the typical family. Health insurance is now up 103%. Childcare, a more daily need for two income households, has gone up as well since Americans many times need
two incomes merely to break into the more elusive middle class. The
items that have fallen are largely adjustable and elastic substitutes.
For example, you can have macaroni and cheese instead of a steak.
Everyone needs shelter whether they buy or rent.

The gigantic housing bubble has only pushed the tide out further to reveal the disappearing middle class. If we break down the data further from a
study examining the middle class we find that fixed costs are now
through the roof. What is more troubling is that even with two incomes,
the ability to sustain a middle class lifestyle has actually gone
backwards: 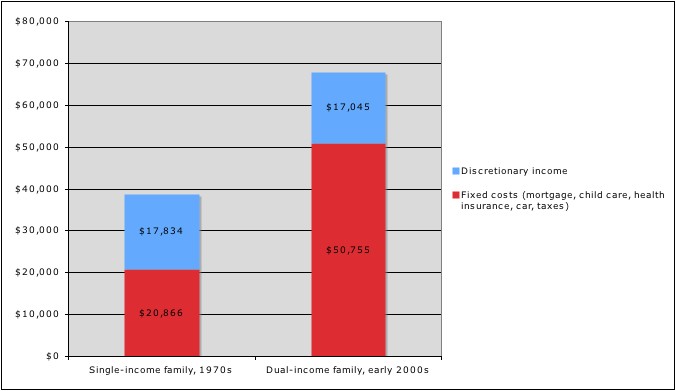 There is also more volatility on income security. Wall Street and the corporatocracy are running the biggest hypocrisy show in the world. Middle class families are having to adjust to the new economic reality
by filing for bankruptcies,
losing homes in foreclosure, and getting gouged with credit
cards. Yet banks and Wall Street have not cut back and have gone
the opposite direction by giving out record bonuses to their small
circle of cronies. The bailouts were a large protection of the
entrenched corporatocracy.

The biggest scam of the century revolves around the massive growth in debt. Let us chart this back to the 1970s: 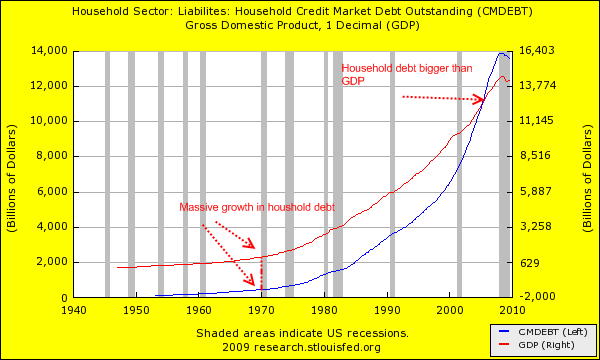 The U.S. Treasury and Federal Reserve disconnected the U.S. dollar from any semblance of reality back in the 1970s. Since that time, Americans have
been put into a sleepwalking state where they were drunk on debt
induced spending while slowly and surely our manufacturing base was
removed from the country. The above chart hit a climax when household
debt actually surpassed annual GDP in this decade. In other words, we
spent way more than we earned and nothing that operates under that
system can survive for any length of time.

This has infuriated many since they thought they were part of the new economy but in reality, they were merely treading water until Wall Street and the banks had to hunker down and protect their small inner
circle. Why else is the stock market up 60
percent since the March lows? Let us look at some data since March
and see how well Americans have been doing: 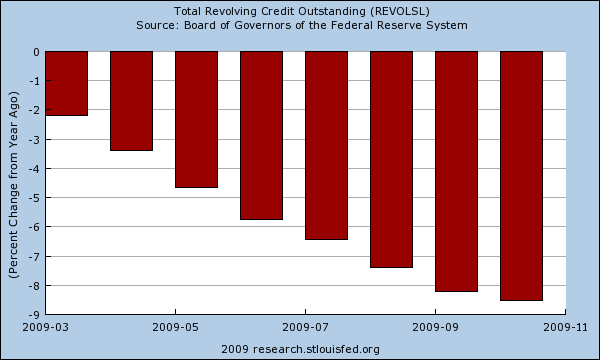 The unemployment rate shot up from 8.5% to 10% in this time and consumer credit has been contracting at a record pace. At the same time, banking profits are going sky high. Take a look at some of the
big banking names:

The corporatocracy seems to be doing well in this climate even though the middle class American lifestyle is being dismantled piece by painful piece. Not only is this happening but Americans now have a new
line item and that is to fund the bail outs. This is happening through
more clandestine channels like destroying the value of the U.S. dollar
by printing inordinate amounts of money so banks can keep on giving
record bonuses. The financial sector is a blood sucking vampire that is
draining the real economy of its life. Why do we even need it at the
current size? All mortgages are now backed by the U.S. government
through the GSEs or FHA insured loans. Credit card debt and access is
shrinking. Banks have curtailed lending to small business. What is the
financial sector doing to justify their current profits? Pure and
simple speculation on the taxpayer dime. This isn’t capitalism as Adam
Smith envisioned. This is a system called a corporatocracy where the
main goal is protecting the too big to fail and allowing everyone else
to fail.

The average American has every right to be furious at what is occurring. The next generation might have it worse than the last. Not since the Great
Depression has this occurred. Some might say that this was destined to
happen. That is the storyline the corporatocracy would want you to
believe so popular anger can be quelled. Yet this was a deliberate
stealing from the American people. Many of these Wall Street elites
have no allegiance to the country. They put money in secured tax havens
in other countries and hide their money in multiple places avoiding
taxes from a country that allows them to run their scam. They have
allegiance to only one and that is money. They don’t care about the
productive economy of the U.S. Lobbying with their fleet of lawyers is
simply another business expense. And here we are, 40 years later with a
disappearing middle class, booming financial stocks, millions of
foreclosures, and weak financial regulation. Nothing can be clearer
than where the power has shifted.

Comment by nonya on February 11, 2010 at 11:55pm
I think Elizabeth Warren should replace Geitner. I think it is healthy to lose the middle class for one reason only......that is to lose the class system all together. There should no longer be haves and have nots. NO MORE filthy monetary systems to designate people into classes. We have enough division in this world. The middle class are the first ones to say, I don't want my money going to support someone else. Yet, when it happens to them, they get a taste of what its like on the other side. Down with all classes, wrecking ball to wall street and destruction to our monetary system....(my dream)