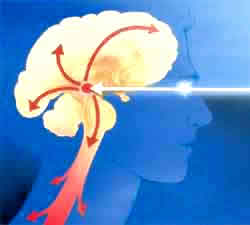 The Epifyse is against the roof of the intermediate brains, to be precise at the top of the third ventricle. This gland is the size of a dried pea and weighs barely 200 milligrams. It is a typical youth gland after the tenth year of life begins to decline. The separation of the product epifyse to puberty as a brake on the hormonal activity of the gonads. Then at a certain time determined by the mysterious clock of life, the epifyse effect, and give the adenohypofyse (for pituitary lobe) gonads the signal that the production of sex hormones can begin.

The current western science is not so far and have limited facts about the function of the endocrine glands collected, although the hormones serotonin, melatonin and Dimethyltryptamine (DMT) have discovered. Observed effects of melatonin on the immune system include the increased production of natural killer cells, stimulation of phagocytosis and promote the growth of bone marrow cells and anti-cancer properties.

Science has discovered that the epifyse a rhythmic alternation of light response. And a control neurovegatatief body and most hormonal influences, such as those of sex and hormone metabolism may slow down. She has called a circadian rhythm and a more coherent rhythm with seasons. She is the heart of the psych omat ic control, as is suggested by its location in the middle of the brains.

The many signs indicate that the pineal gland a sensitive regional and neuro-endocrine control unit, which communicates by means of, inter alia, a combination of neuronal electrical activity and a range of hormones which some psycho active. As the pineal gland as a unique collection of soft tissues, the microscopic spheres ( "brain sand") in the cells, which consist of concentric layers of needle-shaped calcite, apatite and magnetite crystals. The latter are sensitive to strength and direction changes in the Earth's magnetic field.

What is the relationship between the (psychoactive) hormones and electrical activity of neurons and the various crystals - is as far as we know, never described. However, there are publications on these elements separately. About the function of the brain sand is still unknown, except that the sizes and quantity is not consistent with human age, in contrast to what was long thought. The epifyse seems an important role to play in the synchronization of certain bodily functions to daily and seasonal variations. Research has shown that the epifyse acts as a biological clock that the day-night rhythms including circadian rhythm control.
circadian rhythm, the phenomenon that many physiological processes in plants and animals a rhythm of about one day (Latin: dies), ie. 24 hour show. This rhythm by external factors (eg lighting, food administration) gradually adjusted. In a quick move to east or west affects the biological clock of stroke
In mammals, the epifyse involved in the regulation of reproductive seizoensgewijze by the annual light variations linked to the activity of the gonads through a changing production of melatonin.
The role of the pineal gland in mystical experience

The pineal gland (epifyse), a small organ in the center of the brain, neuroscience is known as an endocrine gland that produces a range of hormones, which are regulated by, among other things, the light-dark (day-night) cycle. The hormones are serotonin, melatonin, DMT (dimethyltryptamine), 5meo-DMT (5-methoxy-dimethyltryptamine) and pinoline.1-5 Old spiritual traditions such as Yoga and Tantra consider the pineal gland as a "cosmic antenna through which we are in contact with a deeper, mystical realiteit.6 Science has evidence that the pineal gland is indeed a role in mystical (or transcendental), and hallucinatoire paranormal experiences, because some of its psychoactive hormones zijn.7-10 For this project, three groups of subjects are formed:
1. People (in the laboratory) mystical experience in itself can generate through silent prayer and / or meditation.

2. People can pray in silence and / or meditate in the laboratory, but never been able to mystical experience in itself to raise, although they do want.

3. People can pray in silence and / or meditate in the laboratory, but who do not believe that a mystical experience is possible today (mystical experiences described in the Bible, for them something of the past, or a metaphor) .
Group 3 is to find out whether their faith ( "mystical experiences impossible) a negative effect on the results. An earlier investigation into the relationship between various conscious states, achieved by various forms of meditation and EEG brain wave patterns, we have already become clear that all three groups of peoples existence.

A. A multi-channel SQUID neuromagnetometer13, 14, the magnetic component measurement of the electrical brain activity. (This is already the first promising measurements to the pineal gland.) View these measurements can be spatially related to the pineal gland and other brain structures, will be located in any single subject should be by means of MRI scanning.

B. A PET scanner, which is able to blood flow and various types of metabolic activity to locate and measure the brains.

Both devices are capable of measuring the activity of deep brain structures. Measuring time with both devices will be made in various hospitals and universities in and around the Netherlands.

Then, a statistical analysis of the differences in measurements between the groups of subjects, between peace and prayer / meditation and between the subjective reports of whether or not having a mystical experience.
This project is expected to yield more insight into what topographically in the brains happens before, during and after a mystical experience. It is intended as the beginning of ever more extensive research in which various disciplines involved worden.

There are also new methods in development for the activity of the pineal gland:

Comment by Trudy on July 22, 2009 at 6:11pm
I am looking for months for an explanation about what happened to me in April, the experience of light, this study of Saskia Bosman is so far the best explanation for me ...