WE ALL HAVE THE POWER TO DECIDE! 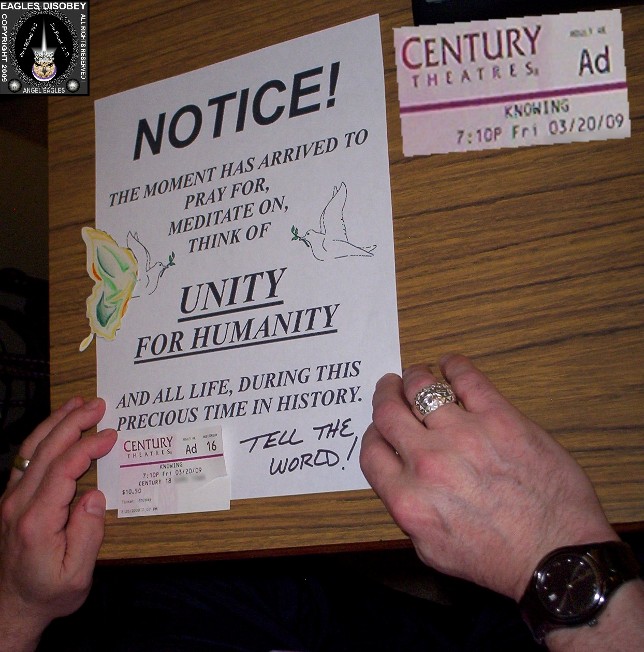 On March 13, 2009, Dan found the date of the J-Rod’s and Orions’ T2 catastrophe event, buried in the words of Chi’el’ah (the J-Rod he met), and in their "Shadow Language." A careful study was conducted, and the date was found to be the likely valid date of the T2 event. Millions, over 10 million worldwide, responded to the call by Eagles Disobey to focus upon Unity for Humanity, during the time of the "Cycles Cross." On March 28, 2009, at 12:00 noon Universal time, a meeting was held with the Echelon Representatives of the adjourned Majestic, and of the "New Group" which took over in Majestic’s wake.
Most of the original crew, who were with us during the critical beginning "Unity" phases, in 2006, were also present. At that meeting, we announced, several minutes AFTER the date/time, that we had passed the date recorded in the J-Rod’s and Orions’ history, that we had survived the Cycles Cross without disaster!

Records from that meeting may be found in a couple places:

(or copy this address into your browser and go to: http://neweaglesforum.proboards.com/index.cgi?board=announcement&action=display&thread=249)

(or copy this address into your browser and go to:
http://the-goldenthread.proboards.com/index.cgi?board=general&action=display&thread=2&page=50 )

As we approached the Cycles Cross, and WE THE PEOPLE (worldwide) focused, the Sun became ever more quiet.