Alien and UFO circles are abuzz with claims of remarkable ancient Egyptian artifacts discovered in the former Jerusalem home of the famous Egyptologist Sir William Petrie, items that “could rewrite ancient Egyptian history” and indeed the history of the world.

A YouTube video released by the website Paranormal Crucible purports to show ancient Egyptian sculpture artifacts originally found in the “Giza complex,” but reportedly taken away from Petrie’s Jerusalem home by representatives of the Rockefeller Archaeological Museum shortly after they were found, according to the website UFO Sightings Daily.

According to the Shepard Ambellas, editor-in-chief of the “alternative news” website Intellihub News, the alien Egyptian artifacts were discovered hidden in a secret room behind the Egyptologist’s bookcase. Petrie had apparently found proof of extraterrestrial life on Earth before he died in 1942, but chose to hide them away in his Jerusalem home. Now that the Rockefeller Museum has taken possession of the artifacts, alien and UFO pundits fear they may never be accessible to the public.

However, Ambellas claims that some of the relics may be seen at the Petri Museum of Egyptian Archaeology in Malet Place, Camden, near Gower Street, London.

The Inquisitr was able to confirm that the prestigious Petri Museum of Egyptian Archaeology has in its possession a vast collection of ancient Egyptian and Sudanese artifacts, including ancient Egyptian “firsts,” such as the “oldest linen” and “oldest dress” from ancient Egypt (5,000 B.C.). The museum also displays lion sculptures from the temple of Min in Koptos and the earliest known products of metallurgy from the ancient civilization. However, The Inquisitr was unable to confirm that the museum has on display “alien Egyptian artifacts” recovered from a secret room in Petrie’s former home in Jerusalem.

But believers will assume that the more sensitive relics of alien origins are being kept from the public.

Ambella claims that the alien Egyptian artifacts allegedly found in Petrie’s former Jerusalem home, which link the ancient Egyptian civilization to an advanced ET civilization, include two mummified bodies less than four feet in height. Although dwarfs and pygmies captured in the interior of Africa were held in high esteem as “celestial beings” in the Old Kingdom era of ancient Egypt and served in high positions, Ambella speculates that these four-foot creatures are “possibly alien in nature,” and thus literally of “celestial” origins.

Details of the physical features of the mummified bodies appear to support the suggestion that they were “possibly alien in nature.” According to Ambellas, the skeletons have stereotypical alien “elongated heads, large eye sockets, and long spinally arms.”

Equally interesting were the “highly advanced” mechanical devices, including a disc of gold with a transparent top found with the alien bodies. According to Ambella, the high-tech devices have “an intricate mechanism which is surrounded by gold spiral tubing that has several small gold orbs and crosses attached to it.” The devices had non-ancient Egyptian symbols on them, as can be seen in the image below.

Are these alien interstellar navigational devices? Well, they might be, judging from the fact that the relics also included stone tablets that “appear to show alien spacecraft,” according to Ambella.

This is not the first time that archaeologists have found ancient Egyptian stone tablets bearing inscriptions suggestive of alien spacecraft and other sophisticated and advanced machinery. The image below shows the famous “Helicopter Hieroglyphs” recovered from a temple in Abydos, Egypt, showing what appears to be modern aircraft.

Although scientists have attributed the “aircraft” interpretation of these inscriptions to the psychological phenomenon called pareidolia, the belief is widespread in alien and UFO enthusiast circles that these hieroglyph inscriptions are proof of alien pilots and astronauts who contacted ancient human civilizations and influenced the cultural and technological development of early human societies.

Several UFO and alien news websites reported in November of 2010 that Dr. Alaaeldin Shaheen, Dean of the Faculty of Archaeology, Cairo University, admitted, in response to a question about the ET links of the pyramids, that the ancient Egyptian pyramids are “not of this world.”

“I can not confirm or deny this, but there is something inside the pyramid that is ‘not of this entire world.'”

But he later denied the widely circulated report.

“I did not give such stupid statement[s] about aliens and Pyramids. As [I am] Egyptologist I could [not] say such stupid words and ideas.”

Needless to say, such denials don’t impress UFO and ET believers, who see evidence of “cover up” conspiracies when officials and academics deny revealing statements earlier ascribed to them.

UFO and ET pundits continue to debate why Sir William Petrie and his colleagues kept these remarkable alien Egyptian artifacts secret and did not release them to the “general public.”

Pentagon Secret – The Anunnaki Are Returning 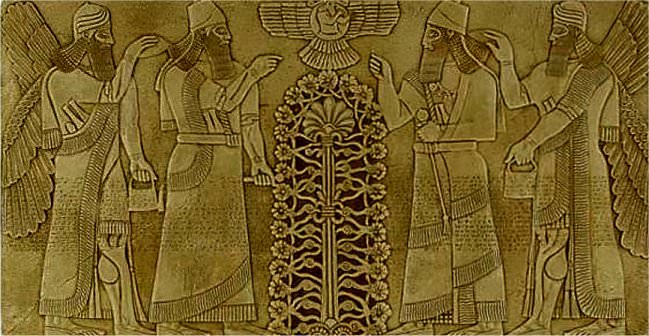 The Anunnaki may be returning to Earth according to one recent interviewfrom a man with insider Pentagon sources.

According to Stan Deyo, the buzzword around the Pentagon is that theSumerian Gods are returning back to Earth.

With two well known celestial objects on the horizon, one must question why the comets ISON and Encke were given those particular names.

The word “on” is associated with the word An (pronounced “on”), as in Anunnaki, and one of their leaders, Anu (ON-nu). The prefix for ISON would be IS, as in Isis who is the same character in folklore as Inanna and the SumerianGoddess, Ishtar.  So, if you seperate the word ISON to become IS + ON, you get Ishtar, of the Anunnaki.

Comet Encke is much more obvious to those who have studied the Anunnaki. Enki (as in comet Encke) was a Sumerian God who was later referred to as Ea (as in why our planet is called EArth).  Enki was the deity of crafts, mischief,water, seawater, lake water, intelligence and creation.

Many people are looking toward the western skies at an anomaly we can only call a UFO, as there are no major stars or planets in this particular area of the sky, according to the cellphone app, SkEye or Stellarium. Some believe this UFO may possibly be a Pleiadian or Arcturian ship but it is also possible that it might be the return of the Anunnaki.

As evidence from many reports and videos from all around the globe, this UFO changes color and size.  Various sacred geometry shapes can be detected from this UFO and the colors will change intermittently.

If this UFO is the Anunnaki, expect all governments to ensure that a new starwill be placed on SkEye and Stellarium  applications to cover up the fact that we are not alone in this galaxy or universe.

For some people, this will be too much for them to swallow.  Others will denywhat is happening but for those who have the capability to look outside the box, all possibilities exist without fear or apprehension.

Governments rarely tell us the truth and cover their trails with the excuses of the information being “confidential” or a “security risk” so it is quite possible that most governments know about the return of the Anunnaki, yet fear telling the people because it would collapse their economic slave systems and world religions as we know them.

A thought to ponder comes from the Christian bible, King James Version.

One must question why it says “let US make man in OUR image”.  If there was one god, then should it read, ” And God said, Let ME make man in MY own image”.

Is it possible that the bible was written by the Anunnaki and designed tocontrol man through fear?  After all, religion = subservience, control andconformity, which is the same template as EVERY government.

For the record, the King James version of the Bible was edited by Sir Francis Bacon, who was a 33rd degree Freemason.  At this level of freemasonry, there is a motto of “ordo ab chao” which means “order out of chaos”.  The bible ends in chaos with the chapter called Revelation.

In the Sumerian tale, Enki disobeyed his father, Anu, and loved the humancreations.  Enki and Anu have been at war ever since this betrayal.  Anu was one of the “creator gods” who manipulated our DNA to make us slave workers who would mine the gold on this planet for the Anunnaki.  This is most likely the reason why the Roman Catholic Church is in possession of so much gold.  According to one source, it is estimated that the RCC owns 60,350 metric tonnes of gold.

If you look at the pyramid on the back of the US Dollar, you will see an “all seeing eye”.  Is it possible that the entity (or entities) at the top of the pyramid are the Anunnaki and have kept us as economic slaves for thousands of years?

Regardless of how this plays out, people are awakening to the tyranny and oppression of all governments and are realizing that our current ways of lifeare unsustainable through fiat currency and our current economic slave system.

In total, there may be several thousand world leaders who are keeping us all in economic slavery while knowingly polluting our water, air and food supplies.  The main stream media continues to play the fear card as well as crank out as much state sponsored propaganda as possible.

We can all rise above this and it could literally happen overnight but first, the bottom of the pyramid (ALL of us) must unite.  We can no longer tolerate the hatred of other countries, ethnicities or races because this is what keeps us from advancing as a civilization.

The Hopi believe that we are the ones we have been waiting for.  In other words, we have the power to change things right now, without help from the Anunnaki or any other possible benevolent extraterrestrial race.  But first, we must unite as a global community.