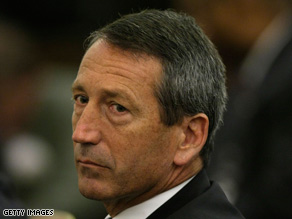 Russian Foreign Ministry sources are reporting to President Medvedev today that the Governor of South Carolina, Mark Sanford [photo top left], arrived at Russia’s Ottawa Embassy seeking ‘immediate assistance and protection’ for his plan to succeed from the United States over what he states is the ‘planned annihilation of his country’ by a ‘criminal cabal’ headed by the current US President Barack Obama.
According to this bizarre report, Governor Sanford, who has been reported as “missing” for the past week after evading his security detail, pleaded with Ambassador Mamedov to have Russia become the first country to recognize the ‘New Nation’ of South Carolina upon its succession from the United States and promised in return that Russian Military Forces would have ‘total and immediate’ access to his States ports and airfields.

Russian legal authorities state in these reports that Governor Sanford’s statements under US law could be construed as treasonous, though they doubt that Obama would seek prosecution opting, instead, to ‘neutralize’ this threat as most US Presidents have done in the past, most notably Louisiana Governor Huey Long who was assassinated in 1935 after his threats to succeed from the United States during the Great Depression.

Comment by jose v on June 24, 2009 at 6:26pm
COLUMBIA, S.C. — After going AWOL for seven days, Gov. Mark Sanford admitted Wednesday that he'd secretly flown to Argentina to visit a woman with whom he'd been having an affair. He apologized to his wife and four sons and said he will resign as head of the Republican Governors Association.

"I've let down a lot of people, that's the bottom line," the 49-year-old governor said at a news conference where he choked up as he ruminated with remarkable frankness on God's law, moral absolutes and following one's heart. His family did not attend.

The woman, who lives in Argentina, has been a "dear, dear friend" for about eight years but, Sanford said, the relationship didn't become romantic until a little over a year ago. He's seen her three times since then, and his wife found out about it five months ago.

He told reporters he spent "the last five days of my life crying in Argentina" and the affair is now over. Sanford, a rumored 2012 presidential candidate, refused to say whether he'll leave office.

"What I did was wrong. Period," he said.

Questions about Sanford's whereabouts arose early this week. For two days after reporters started asking questions, his office had said he had gone hiking on the Appalachian Trial.

Cornered at the Atlanta airport by a reporter, Sanford revealed Wednesday morning that he'd gone to Argentina for a seven-day trip.

When news first broke about his mysterious disappearance, first lady Jenny Sanford told The Associated Press she did not know where her husband had gone for the Father's Day weekend.

Sanford's announcement came a day after another prominent Republican, Sen. John Ensign of Nevada, apologized to his GOP Senate colleagues after revealing last week that he had an affair with a campaign staffer and was resigning from the GOP leadership.

Sanford, first elected governor in 2002, has more than a year remaining in his second term and is barred by state law from running again.

He emerged Wednesday afternoon at a news conference and it took more than a few minutes into his address before he got to the crux of what had happened. He spoke of his love of hiking and how he used to guide trips along the Appalachian Trail — and only then tearfully apologized to his wife, his staff and his friends.

"I hurt a lot of different folks," he said, occasionally choking up throughout the news conference that lasted about 20 minutes.

A former three-term congressman, Sanford most recently snared headlines for his unsuccessful fight to turn aside federal stimulus cash for his state's schools. His vocal battle against the Obama administration — and libertarian, small-government leanings — won praise from conservative pundits. Ultimately, a state court order required him to take the money.

Sanford was born May 28, 1960, in Fort Lauderdale, Fla., the eldest of four siblings. He earned a bachelor's degree in business from Furman University in 1983 and a master's of business administration from the University of Virginia in 1988.

After working for a couple of years in the financial world in New York, he returned to South Carolina and said he was shaped by his summers working on the family plantation. He served in the U.S. House for three terms before honoring a term limits pledge and leaving office in 2001.

As governor, Sanford has had seemingly endless run-ins with the GOP-dominated Legislature, once bringing pigs to the House chamber to protest pork barrel spending. He also put a "spending clock" outside his office to show how quickly a proposed budget would spend state money.

Comment by jose v on June 24, 2009 at 11:19am
South Carolina Gov. Mark Sanford has just returned from a week-long trip to Argentina, The State newspaper reports, even though his staff claimed the disappearing governor was hiking on the Appalachian Trail a few hours away from the state capital.

Sanford's unknown whereabouts had fueled speculation in South Carolina since he left town Thursday. Even his lieutenant governor was unable to figure out where Sanford had wandered off to.

Click here to read up to the minute details on LiveShots.

An explanation came Monday from the governor's staff -- he was hiking the Appalachian Trail to "clear his head," a spokesman said. Spokesman Joel Sawyer released a second statement Tuesday saying Sanford called his chief of staff to "check in" and would be returning home early due to the hubbub surrounding his absence.

As it turns out, Sanford was nowhere near the Appalachian Trail. He was in Buenos Aires, Argentina, thousands of miles away in South America.

"I wanted to do something exotic," Sanford told The State. "It's a great city."

The governor plans to hold a press conference Wednesday afternoon.

It appears there was a sliver of truth to Sawyer's explanation. Sanford said he had considered hiking the Appalachian Trail, and told his staff he might do so, before bailing for South America.

But he said he didn't know why his staff provided that explanation to the media and that he couldn't figure out why his disappearance drew so much attention.

South Carolina critics were steamed that Sanford would leave without telling key people, like Lt. Gov. Andre Bauer. He also apparently was unreachable by phone, raising questions about who would have been in charge if an executive's decision were needed.

The state constitution says the lieutenant governor can make such decisions in the case of an emergency.

But Carol Fowler, South Carolina Democratic Party chairwoman, said that since the constitution does not define emergency, a tornado or prison problem or some other issue could have triggered a "constitutional crisis" about who wields authority in his absence.

"The governor just abandoned his job," she told FOXNews.com Tuesday, when the governor was still thought to have been hiking.

Sanford said he set off for South America to clear his head after a difficult legislative session.
http://www.foxnews.com/politics/2009/06/24/report-south-carolina-governor-traveled-argentina-appalachian-trail/