One other thing in case no one noticed, these riots began almost to the day as 3 sizable solar CMEs came smashing into earth, combined!!. As you all know, these solar events are not only causing people dizziness and heart palpitations, but in A LOT of cases, magnifying certain emotions.....rage, agitation and anger to be the most pronounced even in the most patient people......let alone the disenfranchised.

Comment by Trudy on August 11, 2011 at 1:44pm
No matter how pathetic you brings out your ''truth'' Simmy .. you feel the compassion for the injured party ;) ... do you know who the injured party is in matter of fact ?? ... it is the rioters who are  been disadvantaged for decades!!!

Walking stick in hand, Pauline Pearce was undeterred as she stood up to rioters wreaking havoc in the street near her home.

The escalation of violence in Hackney, East London, on Monday evening would have intimated even the youngest and strongest, but Miss Pearce, a 45-year-old jazz-singing grandmother, stood firm.

‘I’m ashamed to be a Hackney person because we’re not all gathering together and fighting for a cause, we’re running down Foot Locker [a shoe shop] and thieving,’ she declared.

Her minute-long tirade was captured on camera, and subsequently placed on YouTube, where it has been watched by more than a million people.

Yesterday Miss Pearce, a community worker and internet DJ who has only recently recovered from breast cancer, explained why she took a stand after seeing a young white boy set on by thugs.

‘I was walking past and he grabbed me and said, “Help”. I will never forget his face,’ she said.

‘They rushed both of us, we were flung against a burning car and I cut my leg. I shouted, “Why are you turning this into a black white thing” and one shouted back, “Of course it’s a black-white thing”. That was devastating.

‘It was petrifying but I was just so angry. People’s cars were being set on fire. What has that got to do with the cause of the fellow shot in Tottenham? How does that support his family?’

Very interesting about the webbot prediction Nonya! And gloomy too...

Trudy said: "It was like you watch an orchestrated event ...... and what if they put in undercover rioters, to stirr the riots more!!!" 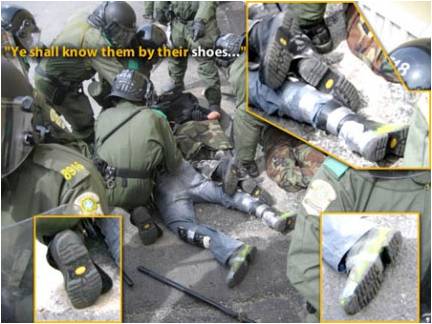 'Rioter' and police dealing with the 'rioter' - all wearing the same police-issue boots.  Just a coincidence, nothing to worry about.

Comment by mellia on August 11, 2011 at 5:18am
Nonya yes! it was also said in the flower of life book it was said when the magnetic field around Earth starts to break down people would take to the streets a little crazy!..

Comment by Trudy on August 11, 2011 at 4:28am
Wow Nonya great link ... poor guy who got ripped off , yeah you better watch your body language when you are in the streets ... better yet if you don't want to get involved stay off the streets!!!

Just so everyone knows....

THIS WAS PREDICTED TO HAPPEN  in the webbot data report July 2011 in these words.....

.....not only in the UK, but in the 2010 reports, they were talking of many revolutions, as is called Globalrev. Sure enough, at the end of last year, Tunisia was the first to start....now its all over the place.

In the following link there are a couple of videos. The last video is an old man who speaks of worse things to come to the UK. Given the above reports and their accuracy, I suggest anyone who lives in the area, be on high alert and maybe move out of there if you can.

.....the first video is a prime example of the senselessness of it all. I wish these kids would go after windsor, banks, etc......not after defenseless people. At the same time, these people have probably been fighting poverty their entire lives, and in a way bullied by people much better off.