We have named our source John Robie, after the charismatic character played by Cary Grant in the classic 1955 movie To Catch a Thief. The following dialog was by e-mail. We have verified the identity and bona fides of our source.

Please tell us a little bit about yourself.

Let's just say for the record that I'm a retired employee of a major western government. I have contacts in some very high places and have been investigating the areas that Bob Dean spoke of for many years, in many countries.

Can you say what specifically you have been investigating?

I'm now much closer to the complexities involved in the UFO field and the government involvement. There's certainly a serious threat by some visiting UFOs and further problems caused by alien visitors who are integrated into our society, possibly holding high positions in government. These aliens - who look like us - are here for unknown reasons and this is causing many problems for those trying to find them.

We've heard a little about this from Bill Hamilton, and also from Bob Dean, as you know. In your personal opinion: these aliens who are very human-like and are considered a threat, are they a real threat to us, or just considered a threat by the Powers that Be? In other words, are they actually benevolent or malevolent?

There's very little doubt they've been here for many years and they have occasionally had meetings with certain very high ranking people. One very high ranking military officer wrote about one such meeting. These meetings are far and few between and the individual is chosen by the alien for such meetings which take place under extreme secrecy.

These aliens operate above normal government knowledge and they are pursued by highly trained hunter killers of several nationalities who operate to eliminate them. Normal people getting close to the truth of what is happening are getting into very dangerous areas and will quickly have a fatal accident. They will not permit anybody to rock the boat. I was warned I would be killed because of some of my work.

The aliens are highly intelligent and have possibly obtained positions at a very high level and this is of great concern to senior authorities. My information is that the only way they can be recognized is by a deformed finger on one of their hands. To hide this they usually wear gloves or a bandage on the finger as if they have had an injury.

The fact that they look like us and mingle amongst us secretly begs the questions: Why are they here and what are their intentions? Why are they so secretive? There are people in very high places who consider them a threat and have squads out looking for them with intent to kill. This is no doubt why they stay secret. The truth is that we fear what we don't understand.

It's not known what their true form is. The deformed finger strongly suggests that do not look like us in their true form. Either way they're obviously highly intelligent and far ahead of us technically. It is not known their planet of origin... or if they are time travelers, they've never disclosed this as far as we know.

Do you have any idea what the relationship or connection may be (if any) between these aliens and the various other visitors?

Are there any well-known public figures, anywhere in the world, who you suspect or are suspected to be non-human?

I don't know. If it became known that there was one such person, he would certainly disappear in very quick time. The authorities would immediately subject him to interrogation in an effort to find out how many of them were here and what their intentions were. This is why they remain secret. But once again, we must question what they're here for and what their intentions are. Always remember: throughout the course of history, a more advanced race has always enslaved a lesser advanced race. This is what worries the authorities.

Have any of these aliens actually been 'successfully' killed, to your knowledge? If so, what means are used?

Do you suspect or believe you've ever met any of these aliens personally?

I've met some very interesting people, but none who have admitted being alien. So again, I have to say I don't know.

Are you at liberty to say how you have come by all this information? Can you, for instance, say more about the provenance of your information? Is this single-source material, or have you heard this from multiple sources? If your sources are insiders, what level/ branch of intelligence/ military/ government are they? How much do you trust them?

Is this a situation recognized by and occupying the minds of authorities in countries other than the US?

Yes. After the US, the leading authorities are Russia and the UK.

May we publish this information, given that there would be no clue to any link with yourself?

Many people involved in this area have met with very nasty fatal accidents.

You can use information I have given you but under no circumstances associate it with me.

This is an entirely separate question. What can you tell us about the real purposes and functions of the establishment shown in the link below - as best you know or believe? We have been clearly told, credibly but non-specifically, that there is a connection with Mars.

There's no doubt been a race by the major powers to be the first to Mars, firstly to examine structures photographed by satellite. There has also no doubt been a civilization on Mars... or still is.

The question is this: are they our descendants? Or are they truly alien, and if so, what technology can be found? It's possible that landings have already been made by the very advanced flying vehicles being used by the top secret American Space Command. This organization, and the technology they possess, are light years ahead of what the public are permitted to know...

Several people have written to us pointing out the similarity between this report and the description of the infiltrating aliens in the old TV series The Invaders.

The whole question of aliens in human form having infiltrated government and the military is not new, of course, and was last year raised by Bob Dean, who is also certain of his information... and he was well-placed to know.

We were put in touch with ‘Robie’ by someone who knows him, and who had seen our interview with Bob and had realized that this was the same material as he had been researching for many years independently.

It was pointed out to us (well before we posted the piece) that this was one of the features of the Invaders TV series. We immediately got back to Robie. He insisted that he had been told this by a number of high-level contacts, at different times and at different places in different countries.

Robie, who is an extremely experienced investigator, now in retirement, was adamant that this information was real. He warned us very clearly that this was dangerous information to know, and was fairly sure that he had been attacked and physically harmed specifically because he was getting a little too close to this truth and was sharing it with too many other people.

What happens, he explained (and we agree) is that parts of the real information are often planted in fictional material - usually TV shows or movies - as a kind of “fuse in the circuit”. So if the truth ever comes out, it is instantly ridiculed as: “Oh, that was just a TV show. You mean you actually believe it’s for real?” A very clever psy-op, it has to be admitted.

The Stargate movie and TV series is a case in point: there’s is a great deal of truth in there. Yet the public thinks Stargates are science fiction. Not so. There are large numbers of other examples of this. Total Recall, 2001, ET... the list goes on.

We do think this is real information, and we invite other witnesses to come forward, on or off record, to confirm or add their own perspective. This is one of the reasons we post what we do, and take the risks that not all other websites take.

As a final note, we have since heard from another witness who describes in detail an encounter with a very strange person on a train a number of years ago (similar to Timothy Good's well-known 'alien encounter' in New York reported in Above Top Secret) who he believes was not human. This person, he told us, kept looking at his hands in a very odd way.

Comment by patrick on October 28, 2009 at 4:20pm
I'm getting a bit tired of these egotistical 'anonymous sources', if they had any integrity they would'nt hide like this. If someone has 'secret knowledge' they should be brave enough to come out and talk about it, otherwise they are just perpetuating the (old) dark. Perhaps Project Camelot should stop pandering to people like this and just do straight up interviews with honest people who don't hide in the shadows. 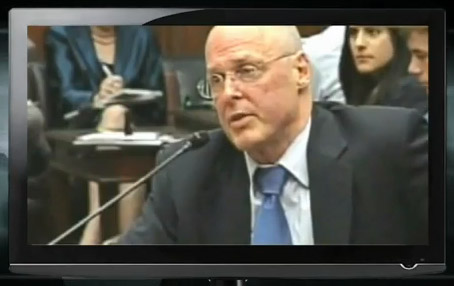 There is someone in high office who has a deformed pinkie....! i saw him on alex jones' fall of the republic and couldn't help but stare at his weird pinkie which doesnt seem to move with the other fingers.

and whenever i see rahm emanuel, im inclined to think "ELF!"
he's a ballet dancer, turned freddie mac board by president clinton, and then congressman.

ballet...!
What the media refuses to tell you about Rahm Emanuel: