OMG—You HAVE to See These Floats in the German Parade!

Thanks for the laugh, Jean! We need to keep our vibrations high.

I don’t think the Germans are afraid of the US Corporation of Cabal. Too flippin’ funny.

The entire world will be tweeting, texting and FBing “LMAO”  at the powers-that-were.  ~ BP

P.S.  This is ideal material for my 4040th post on this blog. That means something in Illuminati numerology, right?

Parade in Germany: If you don’t think Germany is preparing to leave...

Anybody think these people are living in fear? Shall we all join them?

A short update on the energies ~ North
Posted by James Rathey on July 26, 2014 at 6:28pm
Send Message View Blog
A short update on the energies
As many of you have already noticed, these undulations of incoming energy will serve to push more and more to the forefront, and that also includes the resistance to the light. For as these underground reservoirs of light have started to empty their contents on to the surface of this planet, the room for those less inclined to step out into the Sun as it were will continue to shrink at an ever more rapid rate, and as such, their propensity to put up a fight will become more and more apparent to all. In other words, as the space to maneuver continues to shrink for these forces of fear, the amount of noise they will make will only increase, until it will be like a veritable shriek from a dying animal.
We know that our words may sound harsh, but again, we are here to remind you that you are indeed working on behalf of the light and as such, the effect this light will have on those still fighting hard to escape it will also magnify as the light continues to do so. And now, these shadow-dwellers will feel as if attacked from two sides, as not only from without but also from within will this ever increasing flood of light continue to batter through their defenses. You see, you have in many ways opened up a “second front” now, if we may use such words, for this can be likened to a siege, at least to those still intent on keeping themselves separated from the light at all cost. And so, what will seem like a fulfillment of a long held dream to all of those downtrodden people longing for the light for all of their lives, this will seem like the end of a dream for those fully ensconced within that old carapace of ego-based living. For to them, the opening up of these brimming vaults of Mother Earth’s carefully stored away inner powers will seem like no less than a disaster, and to them, the only way to go about it is to raise the alarm and their resistance to the highest of levels.
So again we say, know that all is well, and even if you may encounter these desperate voices and desperate actions of those last few entrenched and desperate beings trying so hard to keep themselves shielded from this approaching light, know that no matter how hard they try or no matter how ruthless they lash out, they cannot stop the remaking of history on this planet. For the light will prevail, and the light will wash away the last traces of this old grime, no matter how ingrained it will seem to be in some of these lost souls wandering about trying to find a new hidey-hole to continue their despotic machinations. They will fail, as surely as the Sun will rise another day, but they will try to go down fighting, and to them no trickery is considered as too base to try out. So simply stay in your center and continue to connect to that flood of light that you are literally swimming in at the moment, and know that no matter how hard they try to reach out their dirty fingers to draw you back into their web of fear, they cannot succeed. For you are as new born babes now, unfettered by those old hooks and barbs that were so useful to secure a grip on for those set on spinning you around like a puppeteer’s doll. So now, you set your own course for you have chosen you destination, and it is one where the shadows have no power over you anymore.
For what will remain of the shadows, will only be as a natural companion to the light, the half that makes the whole complete, but that does not have the power to manipulate nor pollute the other part of the triangle. You see, the light is never alone, it always has a companion, just like the yin and the yang, the black and the white, the outer and the inner, and together, these two form the holy trinity in a way that will be hard for you to fully grasp at the moment, but that we will delve into further at a later stage. You see, the 1 and the 1 makes the 3, the triad of existence, the fusion of it all, and as such, you cannot eradicate the one fully, for it is all a part of the ONE, and 1 is also the sum of the 3. Again, we speak in riddles, but do not fret if you cannot fully comprehend it at the moment, for this basic fact will start to become more and more apparent to you all as the light continues to seep all the way into the deepest recesses of your being, helping your human part to see way past its old limitations and start to fully acknowledge not just the greatness of your own selves, but also the simple structure that carries it all within itself. Let us leave it at that, and give you all some time to ponder these words until we return with more at a later date. Thank you, that will be all for now, we leave.

They did not believe their eyes, the townspeople of Genzou, in China, when they saw the river that runs through the town, on Friday morning, and found that, in one night, the water was crimson like blood! ..

Special teams and researchers took water samples to examine, and none so far can not explain with certainty what exactly happened within a few hours.

The pollution of the river by industries located along the river has been blocked, as there are no chemical plants in the area, while some argue that the phenomenon might be due to the floods.

However there are also some bizarre theories, with some talk about the principle of Facts..Blessings and Greetings.. 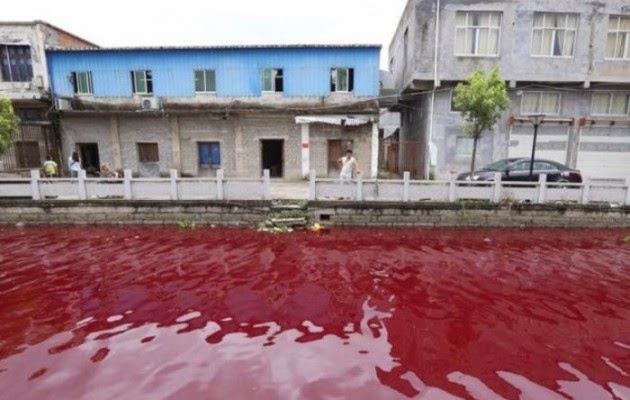 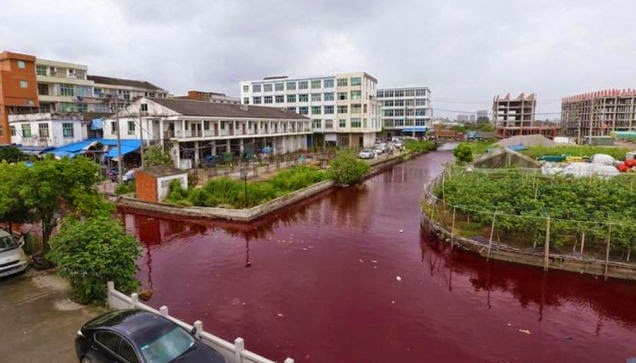