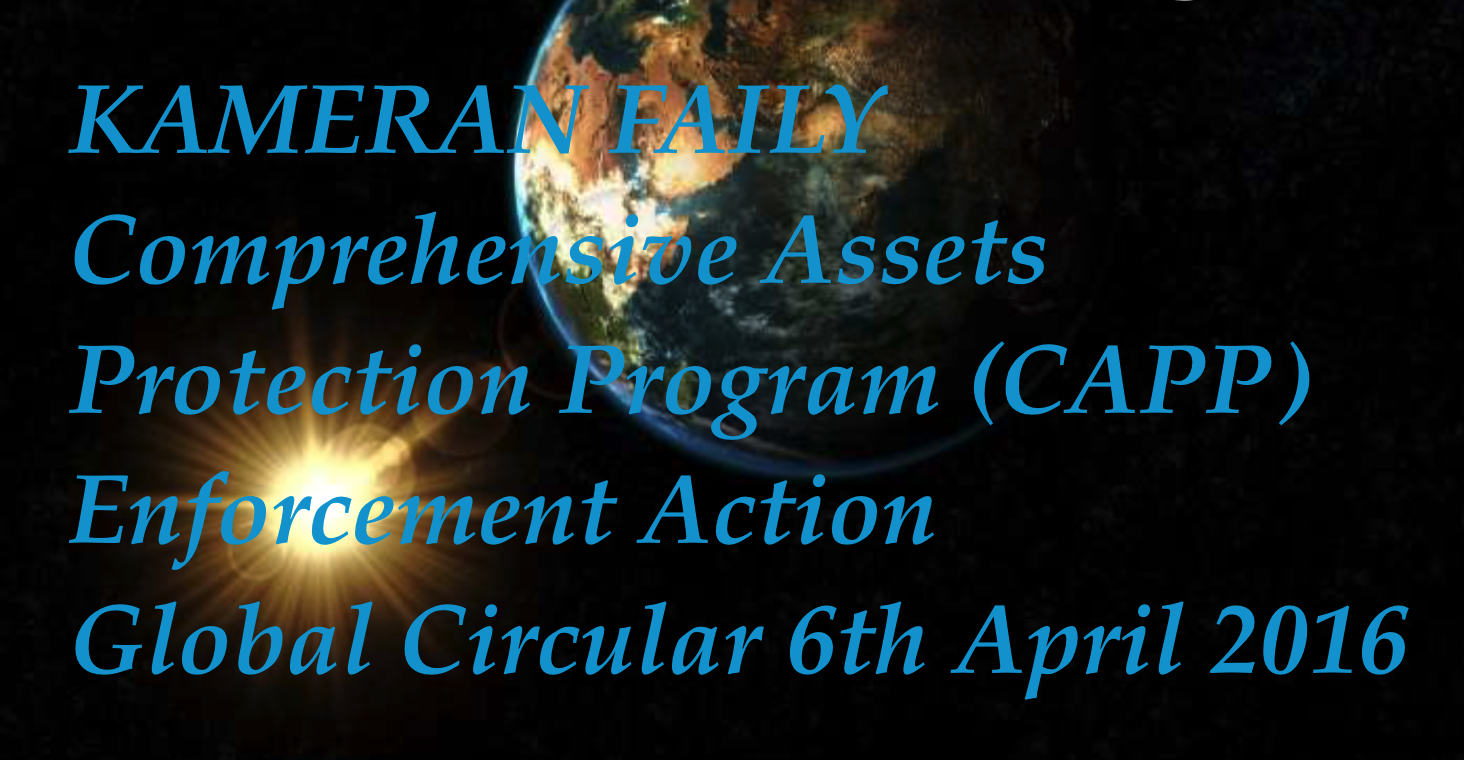 From Kameran Abdul-Rahim Faily Consultant to The Ancient Royal Families.

Peace be upon you ALL,

This is a global circular to ALL Sentient Beings who are present in the vicinity of Planet Earth, Earth Moon and in-between. This is a declaration of Enforcement Action to commence shortly that are part of the Comprehensive Assets Protection Program (CAPP) measures, ensuring the continued protection of ALL Global Assets within this region of space as well as the preparation for future treaties.

Due to the ending of the last Global Financial Agreement with The Royals (October 2015) and the lack of immediate availability of a replacement program, as well as BRICS arrangement not achieving any traction, these caused different parties to try to force their own solutions on The Royals. Some opted to release assets under their keepership without explicit authorization – like that of BRICS. Others trying to sell the assets in the open/black market unsuccessfully. Others printing money without backup under the label of “Quantitative Easing” like (TARP etc.). Others fraudulently printing currency without authority like Iraqi Dinars (2005 and later). Others steeling from Global Accounts destined for humanitarian projects and instead diverting them to other uses like military spending programs. And last but not least, other openly challenging The Royals with the threat of the use of Scalar Weapons to destroy The Royal Assets on a grand scale.

For this and similar reasons and as part of preparations for “The Global Peace Treaty” that is about to be put on the world scene, the Galactic Council had authorised myself (Kameran Abdul-Rahim Faily) around January 2016 with the position/task of “Protecting the Global Assets”. This then instigated the planning, preparation and imminent execution of “Comprehensive Asset Protection Program” (CAPP), that have been agreed with The Royal Elders and The Earth Angelic Contingency to achieve such ends. The previous circular “WARNING To ALL Keepers of The Royal Assets, Global Circular 21st March 2016” was part of this preparation.

What are the imminent CAPP Enforcement Actions?

Regarding the CAPP Enforcement Actions, the followings apply across the board:

What are the next steps?

These due warnings and declarations of Enforcement Actions are hereby given and is expected that they are heeded by ALL. The Galactic Council views these matters with seriousness and so should others. Nothing in the above Enforcement Actions violate any freedom of choice and instead they ensure that this freedom continues for future generations. To plan for future progress, these actions are found to be necessary going forward.

For queries regarding the above, then please contact The Galactic Council or myself to discuss the said concerns.