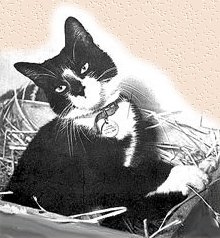 The then Soviet Union experimented in the later 1950s with dogs in capsules on the edge of space; then in 1957 Laika, a mongrel dog who became very well known, was launched in Sputnik 2. According to what the Russians said at the time, she suffered no ill-effects whilst in orbit, but after a few days her batteries and air supply ran out and she died. However, the real story, only revealed more recently, is that she died from overheating and stress just a few hours into the mission. She is remembered on a memorial at Star City, outside Moscow. A number of other dogs followed in her pawprints, up until the mid-1960s; many of them were successfully returned to Earth, but some were not. There are some Russian stamps honouring 'space dogs'.

Other animals — mice and various monkeys — had been used in previous sub-orbital space experiments by the USA, from as early as 1949. The first primate actually to enter orbit in space was Enos, a chimpanzee launched on 29 November 1961 and successfully recovered a few days later.

In 1963 the French government had numerous cats undergoing intensive training for possible space flight, with fairly arduous tasks involving a compression chamber and a centrifuge. But they don't seem to have suffered too much; ten of the would-be astronauts were 'decommissioned' for eating too much! Félix was one of those retained, and was the one chosen to undertake the first mission. He was apparently a Paris street cat, although one report says he was bought by the French government from a dealer. However, it seems that Félix managed to escape, and was replaced at the last minute by a female cat, Félicette, so it was she who, on the prescribed date of 18 October 1963, was blasted off in a special capsule on top of a French Véronique AG1 rocket, from the Colomb Bacar rocket base at Hammaguir in the Algerian Sahara desert.

She did not go into orbit, but in a flight lasting altogether less than 15 minutes travelled some 100 miles into space, where the capsule separated from the rocket and descended by parachute. Throughout the flight electrodes implanted in her brain transmitted neurological impulses back to Earth, and the French Centre d'Enseignement et de Recherches de Médecine Aéronautique (CERMA), which directed these flights, stated afterwards that the cat had made a valuable contribution to research. The capsule and Félicette were safely recovered, but what happened to her after her adventure I do not know. The British press of the time called her the 'Astrocat'. There was another cat flight on 24 October, but the capsule recovery went wrong, and when it was finally recovered two days later the unfortunate cat was dead.

Félix was commemorated on a couple of postage stamps from former French colonies some 30 years after the historic voyage. One, issued in 1992 by the Comoro Islands (above left), is from a set showing various rockets and the animals Laika and Ham, another space-going chimp. Later on, in 1997, Chad produced a series of sheets showing many aspects of space travel. The one with Félix also includes Laika, as well as astronauts Armstrong, Collins and Aldrin and their Saturn V rocket (below).

However, we think that the stamps actually show Félicette, and not Felix as their captions state, because the photo at the head of this article — the only one I have come across, and a press photo of the time — shows Félix to be a tabby and not black and white. As far as we can ascertain, Félicette is the black-and-white cat shown here (right). The inscription on the photo, together with her pawprint, reads in French 'Merci pour votre participation à mon succès du 18 octobre 1963,' which means 'Thank you for taking part in my success of 18 October 1963.' (We don't know for whom it was intended) Interestingly, the philatelic cover below that I came across, produced by an American outfit called Bow-Wow Local Post to mark the tenth anniversary of a cat in space, shows a tabby cat on the blue label, so seems to be inaccurate.