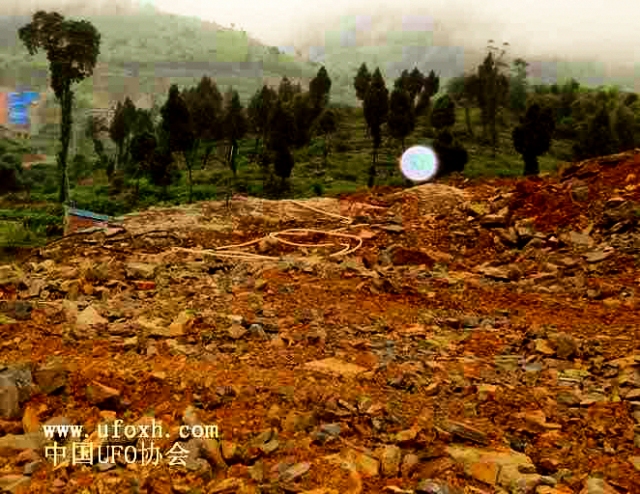 Oh this is a classic ‘X-Files’ story!

OK assuming it’s true – lets just work on the very interesting hypothesis it is – then where does this strange story take us?

Firstly, I have heard tales of villages and people disappearing before in the legends of various cultures.
China has recently been plagued by UFO sightings and has even had airports shut down recently because of incursions into their air space by forces and craft unknown. Notice also that Russia is experiencing a similar thing. What is it about communist countries that seem to attract these ‘predator’ style UFOs and aliens? Maybe it’s the way the collective consciousness of these nations tends to behave in an insect like fashion and reject freedom of thought and individuality that attracts them? I guess holding a whole planet to ransom for so long does have a dark consuming karma attached to it. Considering the occult and mystical knowledge held by the ancestors of these countries you would think they would know better. But of course materialistic, atheistic socialism doesn’t believe in the truth and neither does violent, freedom and female hating pseudo religions.

If it hasn’t happened already, I wonder how long it will be before Mecca and the Vatican get a visit from the predators?

So let’s get back to the rumoured event in China. Here’s my ‘Conspiracy Files’ style take on the story based on the scanty information available so far!

This alleged event occurred on the strange date of 10.10.10. The area affected in Qinling Mountains, Shaanxi province has two unusual places of interest to conspiracy theorists in the region. Firstly, there is the fabulous and ancient 1,000-foot White Pyramid of Xian and secondly the region plays host to a Chinese nuclear facility.

China has recently had a scientific break through with its experiments in generating gravity waves. Did the village become an unwitting victim of such weapons?

UFO’s and time/space portals. Was the village simply relocated through time and space? Did aliens destroy the village?

Is this part of the rumoured ‘false flag’ alien attack scenario mentioned in current conspiracy theories as being planned in order to help bring about the New World Order?

There isn’t any yet……but we will have to continue to watch and wait!

A blue light was seen in the sky reminiscent of the Norway Blue Spiral.

Due to the proximity to a nuclear plant the village was simply ‘contaminated’ in a nuclear accident and a cover up is under way. The Chinese Government and military are simply using UFO’s as an excuse to hide the real situation from both their own people and the world. In the west we do not understand how ‘not losing face’ is of such national importance to the far east.

Comment by CrystalClear2313 on October 15, 2010 at 1:24pm
I hear you Pat, The gov is not acknowledging any of this and it's pretending that every thing is ok and things go along in the same "normal fashion". I haven't heard anything about chine yet as far as en explanation but who knows with way things are going with the Gov hush hush about things we may not get an answer.

Comment by CrystalClear2313 on October 15, 2010 at 12:28am
Patricia that is F&^*%$ crazy! So it has happened before...You are right Creepy is the right word here! I have a friend in NY that actually saw those lights on 10-13-10 he was on a plane coming back from Chicago. He's a source I can def trust and he said they were real UFO's. He's not the type of guy who would exaggerate or make things up. thought I'll throw some info for you.