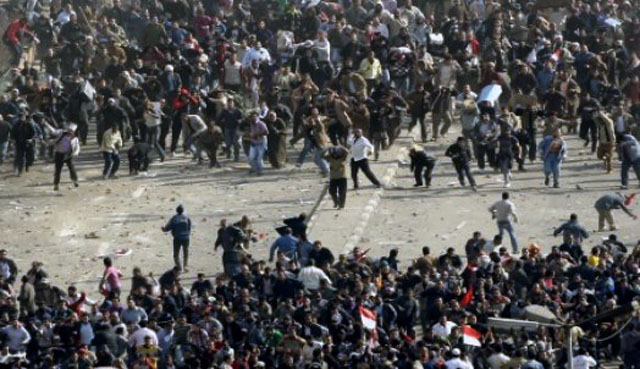 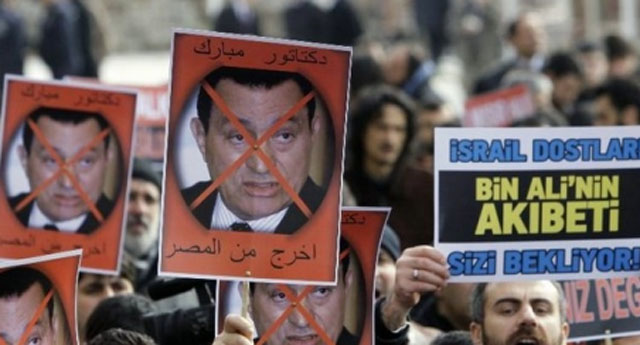 The miserable and unwanted Egyptian regime headed by Hosni Mubarak has started
to implement at the Israeli plan for crushing the revolution in Egypt.
The zionists’ plan was prepared by the high ranks of the israeli military
and presented by the office of the israeli prime minister to General Omar Suleiman,
the head of the Egyptian intelligence who was recently appointed by Mubarak
as his deputy.
The plan aims at crushing and ending the peaceful protest demos
which seek the end of the Mubarak regime,
relying on the experience gained by the israeli intelligence,
while perpetrating atrocities against the Palestinian resistance
and peace demos in over 62 years in the occupied territories.
Mubarak’s speech last night Tuesday, delivered in Arabic,
was the speech of an old terrorist,
it was a declaration of war against the people and the nation of Egypt.
Mubarak threatened in symbolic words which are ONLY understood by Arab people,
but not by foreigners who must translate the Arabic language to English
or other languages.
In his speech, Mubarak implied that he intended
to burn down Egypt over the heads of everybody,
if the Egyptian people insisted in removing him from power
before the end of his mandate as a President of Egypt.
Mubarak told the people with implied threats
and in indirect words during his speech that they should “go screw themselves”,
and that he wanted to stay ruling Egypt until the last day of September 2011.
He further threatened the Egyptians and offered them to choose between
“quite and security under his rule” or chaos without him.
It was a clear that Mubarak was threatening the Egyptian nation, all the nation.
His speech can only be compared to the message of a crazed Roman Emperor Nero
in which he says that he wants to burn down all of Egypt before leaving.
His attitude reminds everybody of the crazy Roman Emperor Nero,
who chose to burn down Rome before his fall.
After his speech, Mubarak started implementing the plans of the Israeli war criminals,
and sent gang of thugs riding horses, donkeys and camels for theatrical effect,
to terrorize the peaceful demonstrators who refused
and challenged his words, to deliver a deadly warning.
Mubarak’s mafia of civilian police and and assorted thugs,
most probably infiltrated with death squads sent from Israel,
the violent groups seen on TV as “pro-Mubarak activists”, are armed.
Until now, all of those captured have been found to be members of the secret police,
the Intelligence (mukhabarat).
During the whole day they have mounted armed attacks
on the anti-government demonstrators in Cairo,
who are only asking Mubarak to leave.
Over 750 people have been injured until now, and the clashes continue.
It is now clear that the thugs of Mubarak were allowed by the Egyptian military
to attack the opposition protesters.

They dragged away the protesters and beat them with the connivance of the military,
which clearly had received orders from the government to not intervene.
Earlier, the military commander had called upon the Egyptians
to return to a “new normal life with open schools, universities and organizations”
as if nothing had happened during the last nine days,
and as everything was over and forgotten.
The clashes began a mass of hundreds of violent demonstrators
supporting President Mubarak brought with them,
more than 20 thousand supporters to encircle the outskirts of the Tahrir Place,
entering from the side of the Egyptian Museum,
the League of Arab States street and Al-Giza.
Pro-Mubarak “demonstrators” were riding horses, camels and donkeys.
Several eyewitnesses said that the pro-Mubarak “demonstrators”
were paid thugs and from the security forces
from the ruling National Democratic Party wearing civil cloths.
They started throwing stones and small pieces of metal before the arrival of
a second bigger group of supporters of Mubarak, also riding camels and horses,
and then they started beating the peaceful protesters
with old truncheons and iron rods.
Many climbed to the roofs of building overlooking Tahrir square
and started throwing big stones at the demonstrators,
and guiding their companions on the streets.
A new chapter of terrorism and bloody violence was started by the
thugs of Hosni Mubarak,
the unwanted President who is fighting to stay in power.
The chapters of this new plan were drawn up in Israel,
and handed over to the Egyptian authorities to be applied as stated.
It was clear that the death squad and bullies and the civilian police
were paid very well by the Egyptian regime and its strongest ally Israel.
The question is, what will it serve them to pay these thugs
to suppress and subvert the will of the people.
Namaste