There is a Jellyfish whose biology allows it to go from a fully mature Medusa, to its polyp stage and back again indefinitely. 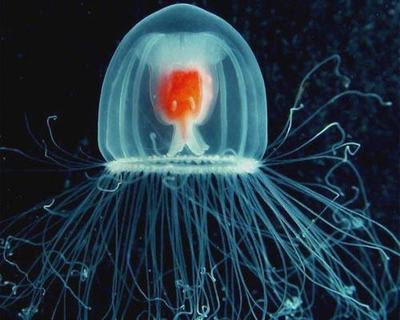 The Turritopsis nutricula is a small jellyfish with an ability so far unique in the animal kingdom. It is the only known jellyfish to have developed the ability to return to a polyp state. Or basically, reverse its life cycle, then grow up again. This process allows the jellyfish to bypass death. In fact, there may be no natural limit to its life span.
The key lies in a process called transdifferentiation, where one type of cell is transformed into another type of cell. Some animals can undergo limited transdifferentiation and regenerate organs, such as salamanders, which can regrow limbs. Turritopsi nutricula, on the other hand, can regenerate its entire body over and over again.
There are many natural dangers to these animals, so they can still easily die. Science also doesn't have a way of knowing how old one is, so there are no records of their old age.

Hehehe! I don't think I have any skeletons left in my cupboard either Patrick!! Well, let's say a skeleton is produced every 10 years..., if that's true I might have 2 or 3 left!!

Comment by patrick on October 1, 2010 at 5:42am
I don't think I have any reserve skeletons left in my cupboard, yes I used them all up , Ha Ha.
Thanks Vaddix and Simmy.

Comment by Vaddix on October 1, 2010 at 2:21am
Imagine our bodies like a computer. Our cells are our files, our DNA is the software that runs the hardware. When you copy a file most of the time it copy's perfectly, other times it corrupts. It misses a 1 or a 0 and the file becomes unusable.
Well same thing with us. Over the course of your live you will produce up to seven full skeletons of bone growth. Your skin constantly dies and more gets made, same with you hair follicles, blood platelets, everything. Now copying those trillions of cells, most of the time they copy fine, But slowly over time those 1 and 0's that make up your dna get corrupted. That is why we age, and that is why we die.
To be honest, i wouldn't wish for it any other way.