50 Nukes Ready To Be Loaded Onto American Bombers In Preparation For Iran?!---by Elijah 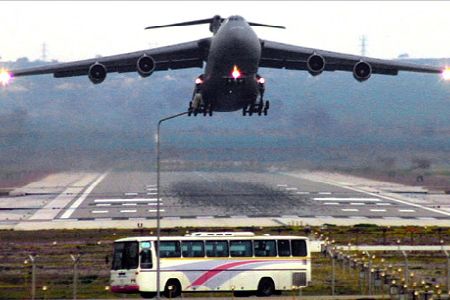 Not only is North Korea getting ready to be attacked by the Illuminati forces of the West, but so is Iran.
'Turkey probes US nukes at airbase'
Fri Dec 24, 2010 11:14AM
A file photo of a US cargo plane taking off from Incirlik Air Base in southeastern Turkey
Turkish parliamentarians are discussing a report revealing that the United States
has deployed 90 nuclear bombs at Turkey's Incirlik Air Force base, a report says.
The report, called the "US nuclear weapons in Europe,"
indicates that Washington currently has 90 nuclear bombs of the "B 61" variety in Turkey,
all on the Incirlik Air Force base, Turkey's Hurriyet newspaper reported on its website on Friday.

and is based on figures provided last February by the US Air Force.

According to the daily, Turkish MP Shukru Elekdag has questioned reasons
behind keeping the bombs on Turkish soil even decades after the end of the Cold War.

is an act which 'could not be easily explained to its Muslim and Arab neighbors.'

positioned in bases in Belgium, Germany, Italy, and the Netherlands.
http://www.presstv.ir/detail/156924.html