How far will the automation of war and the substitution of autonomous robots for human fighters go?

Last week, William Wan and Peter Finn of the Washington Post reported that at least 50 countries have now purchased or developed pilotless military drones.  Recently, the Chinese had more than two dozen models in some stage of development on display at the Zhuhai Air Show, some of which they are evidently eager to sell to other countries.

So three cheers for a thoroughly drone-ified world.  In my lifetime, I’ve repeatedly seen advanced weapons systems or mind-boggling technologies of war hailed as near-utopian paths to victory and future peace (just as the atomic bomb was soon after my birth). Include in that the Vietnam-era, “electronic battlefield,” President Ronald Reagan’s Strategic Defense Initiative (aka “Star Wars”), the “smart bombs” and smart missiles of the first Gulf War, and in the twenty-first century, “netcentric warfare,” that Rumsfeldian high-tech favorite.

You know the results of this sort of magical thinking about wonder weapons (or technologies) just as well as I do. The atomic bomb led to an almost half-century-long nuclear superpower standoff/nightmare, to nuclear proliferation, and so to the possibility that someday even terrorists might possess such weapons. The electronic battlefield was incapable of staving off defeat in Vietnam.

Reagan’s “impermeable” anti-missile shield in space never came even faintly close to making it into the heavens. Those “smart bombs” of the Gulf War proved remarkably dumb, while the 50 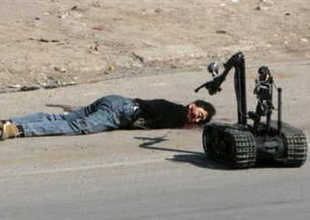 “decapitation” strikes the Bush administration launched against Saddam Hussein’s regime on the first day of the 2003 invasion of Iraq took out not a single Iraqi leader, but dozens of civilians. And the history of the netcentric military in Iraq is well known. Its “success” sent Secretary of Defense Rumsfeld into retirement and ignominy.

In the same way, robot drones as assassination weapons will prove to be just another weapons system rather than a panacea for American warriors. None of these much-advertised wonder technologies ever turns out to perform as promised, but that fact never stops them, as with drones today, from embedding themselves in our world. From the atomic bomb came a whole nuclear landscape that included the Strategic Air Command, weapons labs, production plants, missile silos, corporate interests, and an enormous world-destroying arsenal (as well as proliferating versions of the same, large and small, across the planet). Nor did the electronic battlefield go away. Quite the opposite — it came home and entered our everyday world in the form of sensors, cameras, surveillance equipment, and the like, now implanted from our borders to our cities.

Rarely do wonder weapons or wonder technologies disappoint enough to disappear.  And those latest wonders, missile- and bomb-armed drones, are now multiplying like so many electronic rabbits.  And yet there is always hope.  Back in 1997, Barbara Ehrenreich went after the human attraction to violence in her book Blood Rites: Origins and History of the Passions of War. In it, among other brilliant insights, she traced the beginnings of our modern blood rites not to Man, the Aggressor, but to human beings, the prey (in a dangerous early world of predators).  Now, in an updated, adapted version of an afterword she did for the British edition of that book, she turns from the origins of war to its end point, suggesting in her usual provocative way that drones and other warrior robotics may, in the end, do us one strange favor: they may finally bring home to us that war is not a human possession, that it is not what we are and must be. (To catch Timothy MacBain’s latest TomCast audio interview in which Ehrenreich discusses the nature of war and how to fight against it, click here, or download it to your iPod here.) Tom