"The Earth can't take 6.5 billion people. We just can't feed that many. So what are you going to do? Kill as many as you can," Farrakhan reportedly said during an event in Memphis, Tenn. "We have to develop a science that kills them and makes it look as though they died from some disease."

The 76-year-old added that many wise… Continue

According to these tourists remote viewers are seeing world powers in the course of self-destruction. They also see that… Continue

A very significant event has occurred within the Alert date period and also the defined location: i.e.: 7th July 2009, Silbury Hill, Wiltshire, England. Crop Circle located south west of the hill off the A4 highway. 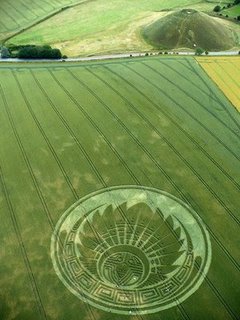 This is the same location where on the 23 May 1994, four researchers (including one nuclear scientist) visiting a crop design in this field, witnessed intense military presence moments before they each experienced 45 minutes… Continue

1. This is Matthew, with a short message to greet you with love and assurance that the latest Illuminati plan—biowarfare—not only will fail, but will be a huge breach in their remaining toehold in your world. Jean Hudon asked for my comments on the swine flu outbreak that was being touted as a global pandemic. I have asked my mother to send my reply to Jean to her distribution list for still wider dissemination of the truth about this virus as well as my additional note about our observations… Continue

The 2009 X-Conference, held in the Washington DC metro area from April 17-19, will encourage the Obama administration to move forward with disclosure of X-Files on UFOs and extraterrestrial life. Several Presidential Memoranda and the inclusion of former Clinton era figures in Obama’s government are cited by participants as reasons why President Obama will positively respond. The conference comes at a pivotal time in the Obama administration. Obama’s first 100 days in office ends on April 30,… Continue

All News Web recently received a series of brief emails from some-one who claimed to have worked in the Pentagon within the DARPA agency on a project that involved collaborating closely with both NASA’s Ames Research Center and SETI. The person who has identified herself as ‘Tina’ has provided us with a number of scanned documents that back the… Continue

Electrical power grid to be blasted by 2012 solar storms

A report issued by the National Research Council (NRC) in January 2009 has warned of the far reaching consequences of a solar storm hitting the Earth as the sun becomes more active during solar cycle 24 which began in 2008 and peaks around 2012. A March 23 article in the New Scientist discussed the significance of the NRC report which details how a solar storm could wipe out the electrical power grid causing massive disruption in the U.S. and around the planet. The impact of the plasma energy… Continue

Newspapers in the Chinese city of Shenzhen in Guangdong province not far from Hong Kong were recently inundated with calls from stunned residents of the city’s Futian district regarding UFOs that lingered above the city for over half an hour. One of the UFOs bathed the area in warm blue-violet light before shooting south. The incident took place at around 7.30pm on February 23 of this year.
A Mrs Zhou saw the UFOs as she stood on her balcony; she said two of the three shot off while one… Continue

Galaxy may be full of 'Earths,' alien life

By A. Pawlowski
CNN

(CNN) -- As NASA prepares to hunt for Earth-like planets in our corner of the Milky Way galaxy, there's new buzz that "Star Trek's" vision of a universe full of life may not be that far-fetched.
An artist's impression shows a planet passing in front of its parent star. Such events are called transits.

An artist's impression shows a planet passing in front of its parent star. Such events are called transits.

SANTA FE, N.M. — Former astronaut Harrison Schmitt, who walked on the moon and once served New Mexico in the U.S. Senate, doesn't believe that humans are causing global warming.

"I don't think the human effect is significant compared to the natural effect," said Schmitt, who is among 70 skeptics scheduled to speak next month at the International Conference on Climate Change in New York.

FYI... Looks like things are starting to come together..

The Federal Reserve is to vote on credit card reforms that may bring some relief to customers who face a variety of ways for being hit with late fees, universal defaults, shorter payment periods and confusing payment allocations for… Continue

This is a quote taken from the History Channel..

"Some of the world's leading physicists believe they have found startling new evidence showing the existence of universes other than our own. One possibility is that the universe is so vast that an exact replica of our Solar System, our planet and ourselves exists many times over. These Doppelganger Universes exist within our own Universe; in what scientist now call "The Multiverse." Today, trailblazing experiments by state of the art… Continue