near the mine is located the big black healing stone, fallen down from space, lying there for some hundred years, last real incas are custodians, the great golden seal of the last inca king was found there. there is a powerful secret society, the LORDS OF THE BLACK STONE, also having a branch in Salzburg, Austria.

what did the miners saw in the mine, we should not know?

why were they saved?

why did NASA intervened?

this saving operation is a symbolic (freemason and or catholic resurection), RITUAL, it is a spiritual percursor, a reminder or recall for us, of what will happen very soon to all of us. If we will resurect is only a question of our individual dna.

from heart, God bless you.

Comment by Besimi on October 16, 2010 at 2:45pm
Very interesting,indeed. You could easily see Masonic Symbols even on TV openly.
Check these articles: 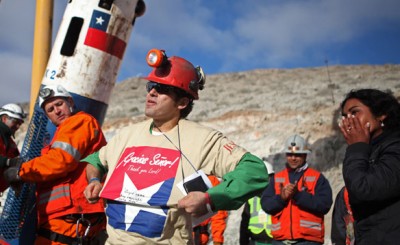 The rescue of the 33 unfortunate Chilean miners has definitely turn into an international media event. All aspects of the rescue have been carefully staged to make the entire thing a spectacular show inspiring emotions, admiration and national pride. For those knowledgeable of Masonic and occult symbolism, it is hard not to ponder on the numerological and symbolic facts of the event. Here are some of them:

1- The number of Miners

Insignia of the 33rd (and highest) Degree of Scottish Rite FreemasonryThe number 33 is of great importance in Freemasonry and in Qabbalistic system of numbers. It can be found in many instances in Masonic lore.

“For example, consider the number 33. The first temple of Solomon stood for thirty-three years in its pristine splendor. At the end of that time it was pillaged by the Egyptian King Shishak, and finally (588 B.C.) it was completely destroyed by Nebuchadnezzar and the people of Jerusalem were led into captivity to Babylon. (See General History of Freemasonry, by Robert Macoy.) Also King David ruled for thirty-three years in Jerusalem; the Masonic Order is divided into thirty-three symbolic degrees; there are thirty-three segments in the human spinal column; and Jesus was crucified in the thirty-third year of His life.”
- Manly P. Hall, Secret Teachings of All Ages

“Alchemy is a threefold art, its mystery well symbolized by a triangle. Its symbol is 3 times 3 – three elements or processes in three worlds or spheres. The 3 times 3 is part of the mystery of the 33rd degree of Freemasonry, for 33 is 3 times 3, which is 9, the number of esoteric man and the number of emanations from the root of the Divine Tree.”
- Ibid

2- The Date of the Event
The date of the start of the rescue is also significant:


The name of the rescue device was named “Fénix” (Phoenix), which is the bird that rose from its ashes. Once again, the selection of the name Phoenix, a mythological creature holding a great importance in occult mysteries, is quite interesting. The bird is considered a symbol of accomplishment of alchemical transmutation, a process equivalent to human regeneration.

“In the Mysteries it was customary to refer to initiates as phoenixes or men who had been born again, for just as physical birth gives man consciousness in the physical world, so the neophyte, after nine degrees in the womb of the Mysteries, was born into a consciousness of the Spiritual world.”
- Ibid. 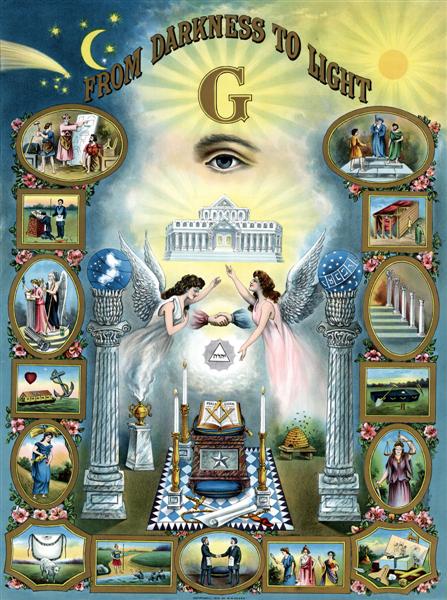 “The work took 33 days total, one day a man,” said Mikhail Proestakis, manager of Driller Supply Company, which participated in the drilling of the rescue shaft with a diameter of 66 centimetres, which is 33 times two.

“I believe in numerology, it has to mean something.”
- Source

5- The First Note Sent by the Miners
“Others call attention to the first note the miners sent up to show they were still alive – “estamos bien en el refugio los 33” (all 33 of us are in the shelter) – which was 33 characters in length.”
- Ibid

6- The Symbolism of the Event
To summarize the rescue event, 33 miners, who were trapped for 69 days in the depths and darkness of the underground were lifted one by one, on 10/13/10 in a device called “Fenix” – a creature representative of occult initiation – to the light of day. As they say “Ex tenebris lux”: From darkness to light.


Acting out the Masonic motto?With these facts in mind, I’m asking you this: was the Chilean Miner’s rescue a Masonic mega-ritual?