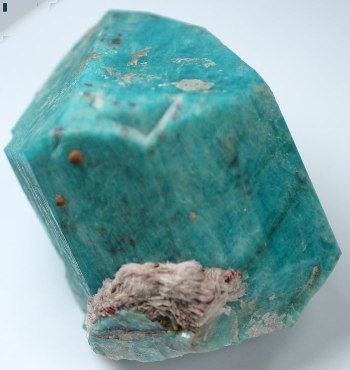 The naturalist Alexander von Humboldt reported that people along the Rio Negro in Brazil wore amulets made of amazonite, which came from the land of the "women without men", the legendary country of the Indian amazons. In the 18th century amazonite was described as "green feldspar."

Amazonite is used to treat heart trouble and metabolic disorders. Placed on the third chakra it lifts depression and reduces anxiety; a necklace of amazonite worn directly on the skin will also alleviate headaches and migraines. Amazonite has a calming effect, corrects mood swings and helps the wearer come to terms with grief. It promotes confidence, vitality and joy of life. Placed under the pillow it promotes a restorative sleep.

Amazonite is often used in fortune telling techniques such as the tarot and runes and stimulates powers of clairvoyance. Worn as an amulet it protects against snake bites and a wide range of diseases. In Egypt it was considered a holy stone.

Placed on the heart and throat chakras, amazonite stimulates the artistic and creative side of its possessor. It also rids him of meanness, greed and selfishness while making him tolerant and patient.

Amazonite may be held or worn. It is also an excellent essence stone: place in a covered glass filled with water, leave overnight and drink in small amounts during the following day. Cleanse the stone once a week under warm running water, then leave in the sun for one hour.

Green and blue green as a result of traces of copper

Tip:: Amazonite helps relieve all aches and pains, including neuralgia. It eases cramp and stress. Flat pieces of amazonite placed on the back and neck will relieve tension.