The MEG Generator is an electromagnetic device without moving parts, which includes a permanent magnet and a magnetic core. The core includes two circuits (m... 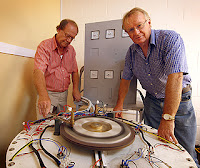 Update: Yet again, Facebook censored the article, particularly in U.S. by deleting comments, wall posts and even forcing its user to enter security text code prior to SHARE the article link on their wall.
Now big question is how to fightback, our answer is please share the link with everyone via email & ask your friend to do it same.. and tweet it with #Freeenergy

THE world may soon be able to buy one of the Far North's most controversial yet revolutionary inventions.
The Lutec 1000 free energy machine have resurfaced after six years of steering clear of the public spotlight, having been granted patents in at least 60 countries around the world, including the US, China and India.
Engineers John Christie and Lou Brits, who have endured intense criticism after they first unveiled their invention in 2001, are now preparing to construct a prototype of their revolutionary power device they hope to market within the next two years.
http://www.ufo-blogger.com/2011/07/free-energy-machine-australian.html