American Drug War The Last White Hope 35 years after Nixon started the war on drugs, we have over one million non-violent drug offenders living behind bars. ... 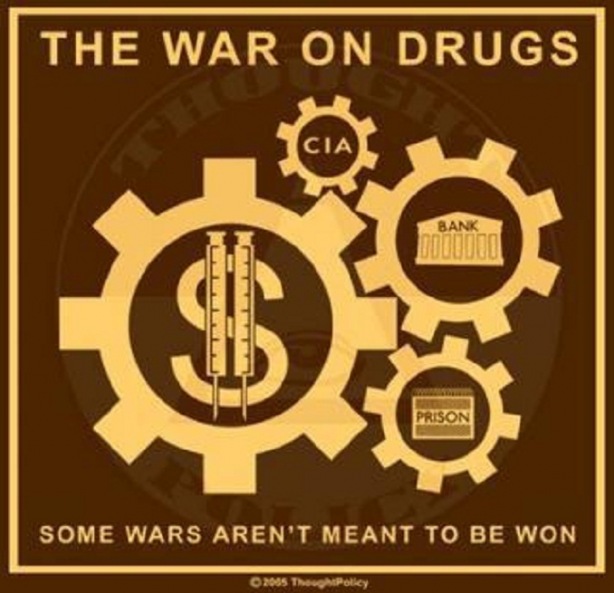 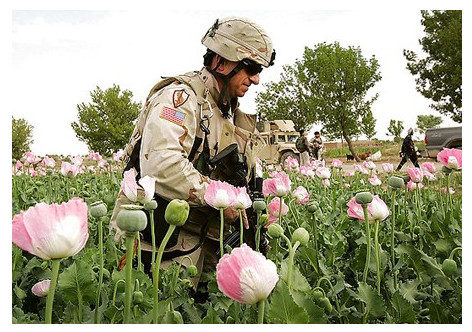 Narcotics: Second to Oil and the Arms Trade

The foregoing estimates are consistent with the UN's assessment concerning the size and magnitude of the global drug trade.

The Afghan trade in opiates (92 percent of total World production of opiates) constitutes a large share of the worldwide annual turnover of narcotics, which was estimated by the United Nations to be of the order of $400-500 billion.

Based on 2003 figures, drug trafficking constitutes "the third biggest global commodity in cash terms after oil and the arms trade." (The Independent, 29 February 2004).

Afghanistan and Colombia (together with Bolivia and Peru) consitute the largest drug producing economies in the world, which feed a flourishing criminal economy. These countries are heavily militarized. The drug trade is protected. Amply documented the CIA has played a central role in the development of both the Latin American and Asian drug triangles.

Michel Chossudovsky is a frequent contributor to Global Research.

The Vienna based UN Office on Drugs and Crime estimates that the 2006 harvest will be of the order of 6,100 tonnes, 33 times its production levels in 2001 under the Taliban government (3200 % increase in 5 years).

According to the UN, Afghanistan supplies in 2006 some 92 percent of the world's supply of opium, which is used to make heroin.

The UN estimates that for 2006, the contribution of the drug trade to the Afghan economy is of the order of 2.7 billion. What it fails to mention is the fact that more than 95 percent of the revenues generated by this lucrative contraband accrues to business syndicates, organized crime and banking and financial institutions. A very small percentage accrues to farmers and traders in the producing country.

"Afghan heroin sells on the international narcotics market for 100 times the price farmers get for their opium right out of the field".(US State Department quoted by the Voice of America (VOA), 27 February 2004).

Based on wholesale and retail prices in Western markets, the earnings generated by the Afghan drug trade are colossal. In July 2006, street prices in Britain for heroin were of the order of Pound Sterling 54, or $102 a gram.

Narcotics On the Streets of Western Europe

One kilo of opium produces approximately 100 grams of (pure) heroin. 6100 tons of opium allows the production of 1220 tons of heroin with a 50 percent purity ratio.

The average purity of retailed heroin can vary. It is on average 36%. In Britain, the purity is rarely in excess of 50 percent, while in the US it can be of the order of 50-60 percent.

While these figures do not constitute precise estimates, they nonetheless convey the sheer magnitude of this multibillion dollar narcotics trade out of Afghanistan. Based on the first figure which provides a conservative estimate, the cash value of these sales, once they reach Western retail markets are in excess of 120 billion dollars a year.

(See also our detailed estimates for 2003 in The Spoils of War: Afghanistan's Multibillion Dollar Heroin Trade, by Michel Chossudovsky, The UNODC estimates the average retail price of heroin for 2004 to be of the order of $157 per gram, based on the average purity ratio).

India's opium latex "is sold to licensed pharmaceutical and/or chemical manufacturing firms such as Mallinckrodt and Johnson & Johnson, under rules established by the UN Commission on Narcotic Drugs and the International Narcotics Control Board, which require an extensive paper trail." (Opium in India) The area allocated to licit State controlled opium cultivation in India is of the order of a modest 11,000 hectares, suggesting that the entire demand of the global pharmaceutical industry requires approximately 22,000 hectares of land allocated to poppy production.

The United Nations has announced that opium poppy cultivation in Afghanistan has soared. There was a 59% increase in areas under opium cultivation in 2006. Production of opium is estimated to have increased by 49% in relation to 2005.

The Western media in chorus blame the Taliban and the warlords. Western officials are said to believe that "the trade is controlled by 25 smugglers including three government ministers." (Guardian, op. cit).

Yet in a bitter irony, US military presence has served to restore rather than eradicate the drug trade. Opium production has increased 33 fold from 185 tons in 2001 under the Taliban to 6100 tons in 2006. Cultivated areas have increased 21 fold since the 2001 US-led invasion.

What the media reports fail to acknowledge is that the Taliban government was instrumental in 2000-2001 in implementing a successful drug eradication program, with the support and collaboration of the UN.

Implemented in 2000-2001, the Taliban's drug eradication program led to a 94 percent decline in opium cultivation. In 2001, according to UN figures, opium production had fallen to 185 tons. Immediately following the October 2001 US led invasion, production increased dramatically, regaining its historical levels.

The occupation forces in Afghanistan are supporting the drug trade, which brings between 120 and 194 billion dollars of revenues to organized crime, intelligence agencies and Western financial institutions.

The proceeds of this lucrative multibllion dollar contraband are deposited in Western banks. Almost the totality of revenues accrue to corporate interests and criminal syndicates outside Afghanistan.

The Golden Crescent drug trade, launched by the CIA in the early 1980s, continues to be protected by US intelligence, in liason with NATO occupation forces and the British military. In recent developments, British occupation forces have promoted opium cultivation through paid radio advertisements.

"A radio message broadcast across the province assured local farmers that the Nato-led International Security Assistance Force (ISAF) would not interfere with poppy fields currently being harvested.

"Respected people of Helmand. The soldiers of ISAF and ANA do not destroy poppy fields," it said. "They know that many people of Afghanistan have no choice but to grow poppy. ISAF and the ANA do not want to stop people from earning their livelihoods." ( Quoted in The Guardian, 27 April 2007)

While the controversial opium ads have been casually dismissed as an unfortunate mistake, there are indications that the opium economy is being promoted at the political level (including the British government of Tony Blair).

The Senlis Council, an international think tank specialising in security and policy issues is proposing the development of licit opium exports in Afghanistan, with a view to promoting the production of pharmaceutical pain-killers, such as morphine and codeine. According to the Senlis Council, "the poppies are needed and, if properly regulated, could provide a legal source of income to impoverished Afghan farmers while, at the same time, depriving the drug lords and the Taliban of much of their income." (John Polanyi, Globe and Mail, 23 September 2006)__

The Senlis Council offers an alternative where "regulated poppy production in Afghanistan" could be developed to produce needed painkillers. The Senlis statement, however, fails to address the existing structure of licit opium exports, which is characterised by oversupply . _

The Senlis' campaign is part of the propaganda campaign. It has contrbuted to providing a false legitimacy to Afghanistan's opium economy. ( which ultmately serves powerful vested interests.

How much opium acreage is required to supply the pharmaceutical industry? According to the International Narcotics Control Board (INCB), which has a mandate to exame issues pertaining to the supply of and demand for opiates used for medical purposes, "the supply of such opiates has for years been at levels well in excess of global demand".(Asian Times, February 2006)