Do I think that Donald Trump is a Freemason? Based on the evidence so far, I suspect that at minimum, he may be an honorary Freemason. But hold onto your hats folks, because I’m about to explode this case with evidence that exceeds reasonable doubt.

By now most of the Western world is familiar with it. It was completed in 1983. And is a reported 664 feet high.

Now before I move on I want to emphasize the present age of that tower and when it was built.

(Note – I want to give credit for this date discovery to Tony Keretz of A Minute to Midnight. He made the calculation while I was being interviewed about this article.)

The tower’s date of completion was November 30, 1983. And become the home of Donald Trump. The tower is now 33 years old.

Trump was elected president on November 8, 2016…which was 33 years after the tower was built.

And the 33 years is almost to the day.

This means that the tower was 33 years old when Trump officially became president. (Thanks Tony.)

Does this have significance? Is it a coincidence? Read on and let’s find out.

Officially, it has 58 floors, but Donald Trump added 10 extra floors to the elevator numbers, and claims that it has 68 floors. He occupies the top three floors, and calls them floors 66 through 68. So in the mind of Trump, his penthouse begins on the 66th floor which is an interesting number.

The purpose of this disclosure is to try to determine if Donald J. Trump is involved in Freemasonry or other esoteric or mystical beliefs.

Ladies and gentlemen, I believe that Trump Tower offers the best evidence, and I am about to show you why. So please read this carefully and pay attention. As I mentioned earlier, members of their veiled craft will often conceal information in plain sight. They will use symbols that represent their beliefs. Also, many religions of the occult and paganism will borrow from one another with similar doctrine. But reason for this is that they all have the same author AKA as Satan the deceiver.

Now watch this folks…The satanic church’ s belief of dualism is represented in the image of the trans-gendered Baphomet which possesses both male and female anatomy.

Now let’s look at Trump Tower. From the ground level, people have not noticed that the tower’s anatomy tells a concealed story. But it does.

Let me say that again, Trump Tower represents the dualism of Baal’s pillars, the inverted triangle of Asherah, and the mystical grove of trees.

So ladies and gentlemen, I now present to you exhibit – C…. Trump Tower!

Here is an image of the tower from the ground. Looking up. Many of you have seen this image in the past. Most folks have not given it a second thought because from the ground, the veiled message is difficult to see. Most of the focus is always on the main entrance. 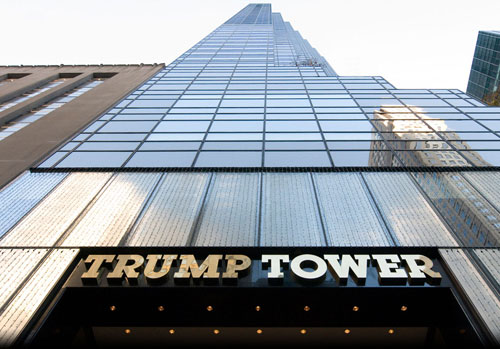 I believe that Donald Trump planned it that way. And I will also say this, based on what I’m about to show you, it appears that Trump Tower has been a continual invocation to false deities.

“What? Nathan do you know how crazy that sounds?”

Yes I do, but over the past few years we have witnessed a pagan rituals that celebrated the underworld. Remember the 2012 Olympic opening ceremony? Past Super Bowl halftime shows? The Grammy’s? The shamans opening portals across America?

“But what is this have to do with Trump?”

Donald Trump is a very unique individual. He is very prosperous, and now he’s the a most powerful man in the world. And he did not get there by accident. Because I propose that Donald Trump has been invoking the spirits and powers of the invisible world to prosper him.

Donald Trump’s penthouse is decorated with homage to the deity Apollo. He has Apollo painted on his ceiling. 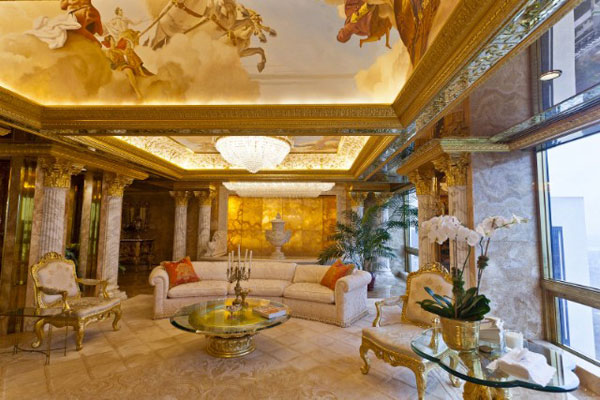 He also has Apollo over his mantle. 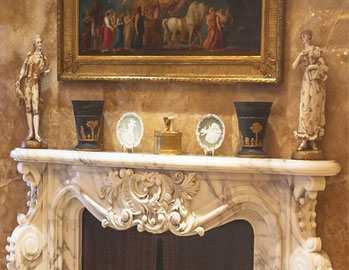 The penthouse has statues of other mythological deities, including Eros and Psyche. 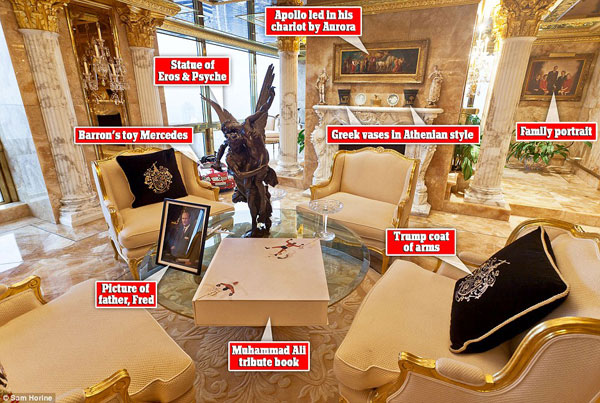 Why is this? Are decent Presbyterians supposed to have false gods on their ceiling? I don’t think so. And before anyone goes thinking that it’s no big deal, I want to remind everyone of the prophecy in Revelation about Apollo.

“And he opened the bottomless pit; and there arose a smoke out of the pit, as the smoke of a great furnace; and the sun and the air were darkened by reason of the smoke of the pit.

And there came out of the smoke locusts upon the earth: and unto them was given power, as the scorpions of the earth have power….

…And they had a king over them, which is the angel of the bottomless pit, whose name in the Hebrew tongue is Abaddon, but in the Greek tongue hath his name Apollyon.” Revelation 9:1,2,11

The creature described in the previous passage, is not human. The principality Apollyon has several renditions including Apollo. He is the destroyer and his real name is Satan. Most mythology is based on the spiritual battle of God versus Satan, the fall of Satan, pre-flood Giants, the nephilim etc. The Hellenistic character of Apollo is one of those. And Donald Trump has him painted on his ceiling. Some may say it’s only for decorative purposes. Which is a possibility, however I have more information to present. So let’s continue.

But I want to first say this, I believe that it is wise for believers to consider several options when studying the end time cast of characters. This means that if we are wise, we must look at the possibility of Donald Trump being the little horn. I know that for some people, the very thought is almost blasphemous, or anathema. But I don’t want to be prophetically sucker punched.

So for a brief moment, allow me to present why I think that it could be a possibility about Donald Trump being a little horn.

The Bible tells us in Daniel 11:37, “Neither shall he regard the God of his fathers,…”

Donald Trump’s father was a Presbyterian. But if trump practices the dark esoteric arts which acknowledging forgotten entities like Apollo, this would qualify to fulfilling the verse above. Now before you say, “no way,” please keep reading.

This exhibit is about Trump Tower. As I stated earlier, most people at the street level cannot really see what is going on above them when they look at Trump Tower. So let’s look at an aerial view. 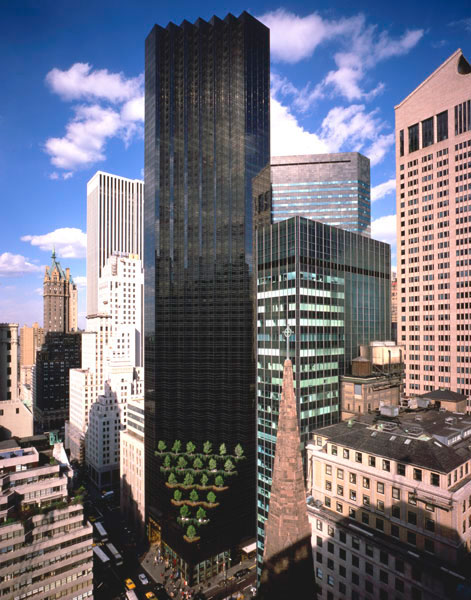 Do you see it folks? It’s right there in front of all of us. The inverted pyramid which represents the female Asherah, and then when we look above it, we see seven pillars rising which represent Baal! 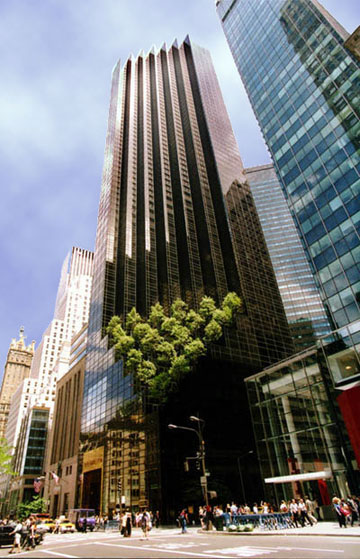 Count the points at the top of the building. There are seven of them.

And now for the grand finale. Let’s zoom in on the inverted pyramid. Count the upper rows going across. Now count each side. 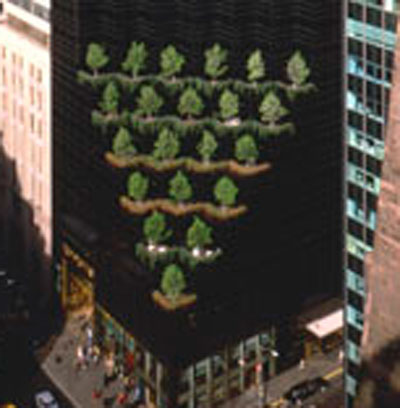 Each side of the triangle has six trees. So Trumps inverted triangle represents 666.

Is it all a coincidence? Did Trump not know what his tower looked like? Of course he did. He designed it. Here is an image of the young Trump standing over his temple. 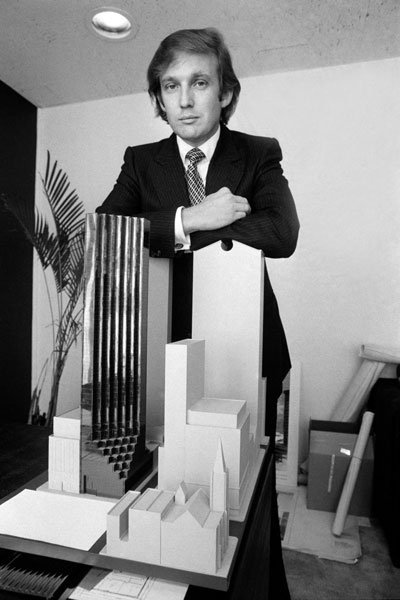 He was proud of it. And had to know about the inverted 666 triangle. 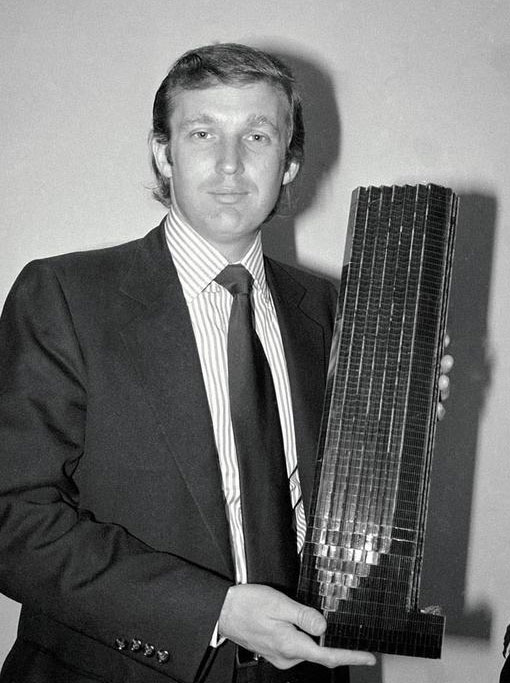 The upper portion above the triangle simulates the rising pillars of Baal. And make note they appear as 7 different pillars rising. (Below) 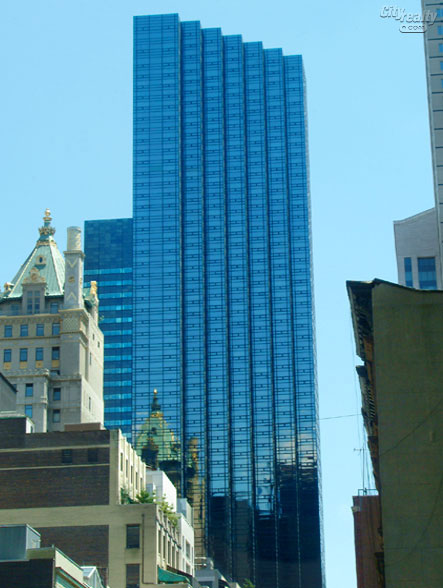 What is it mean? Well it’s right there before us. The pillars of Baal rise up, and the inverted pyramid descends down into the earth. It is interesting that the inverted 666 pyramid actually descends downward in the architecture. Below is a 3d image of the tower. 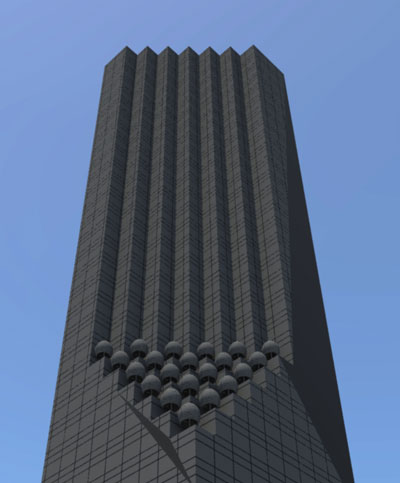 Here is a view from above the tower looking down. ( A 3d rendering)

Looking down, the 666 pyramid sits on 7 points. 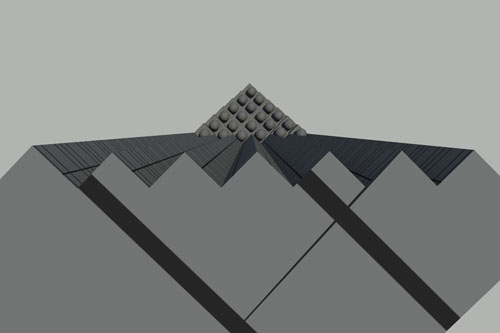 Below is a a close up of the 666 pyramid. From this angle it looks normal. 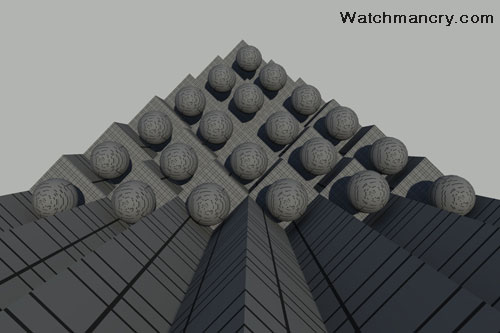 I believe that Trump was deliberate with the design of the tower which completely tells the story of Baal’s pillars and Asherah’s fertility. And I also submit this, because of this design, the tower has served as an ongoing invocation to the spirit world for Donald Trump. He did this so that he would be rewarded with earthly riches and power.

Take a look at the interior of Manhattan’s Freemasonic Lodge. Look at the chandelier in the ceiling. 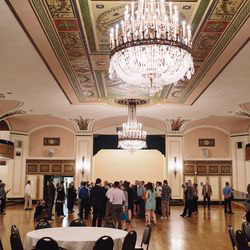 Now look at Trumps penthouse. Look at his chandelier. They are similar. 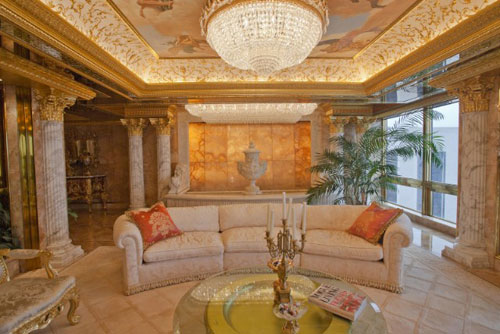 Freemasonic Lodges will often feature the twin pillars of Jachin and Boaz. Take a look at the images of a lodge below. Note that the pillars are installed in pairs. 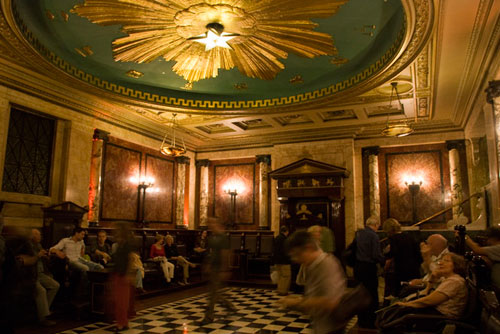 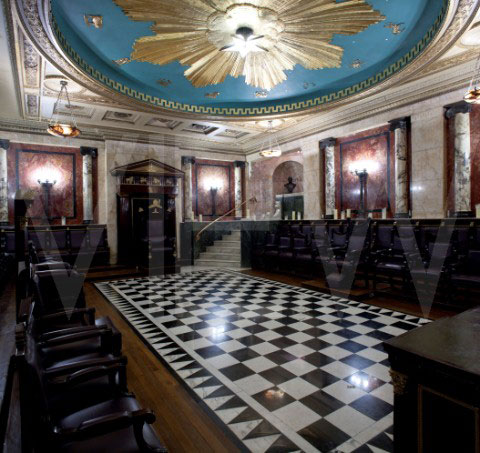 Now look at Donald Trump’s penthouse. The pillars are installed in pairs. In fact the architecture is very similar to the interior of a Grand Lodge., 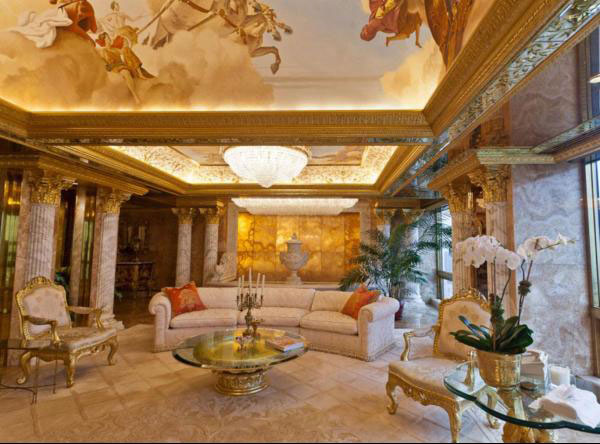 The evidence is before you ladies and gentlemen. 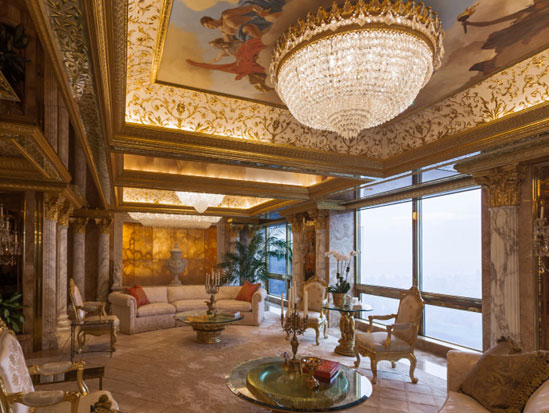 And I conclude and am of the opinion that based on what we have seen, Donald Trump is a cloaked member of Freemasonry and did not become president by accident. I also believe that it occurred through a combination of the deals that he made with the elite, and his invocations to the dark arts. Now granted, if it is revealed that I am wrong, I will recant this, but this is what I conclude from the evidence.

I know that this information may be hard to swallow, but it’s right here folks.

– Trump Tower features the numbers 666 on an inverted pyramid.
– The edifice of Trump Tower exhibits seven sections that rise like 7 pillars of Baal.
– Trump’s penthouse begins on the 66th floor.
– He has mythological deities on his ceiling.
– He also possesses mythological deities in the form of statues.
– His interior replicates the interior of a grand Lodge.
– The pillars inside his penthouse are in pairs.

Shall I go on? I certainly will, and in the next installment, we’re going to look at his coat of arms where we will see further evidence that questions if Trump pays homage and invocation to the deities that are forbidden.

Reader has called my attention to a post discussing links between Trump & the Trump Tower with Freemasonic symbols. http://watchmanscry.com/?p=6550