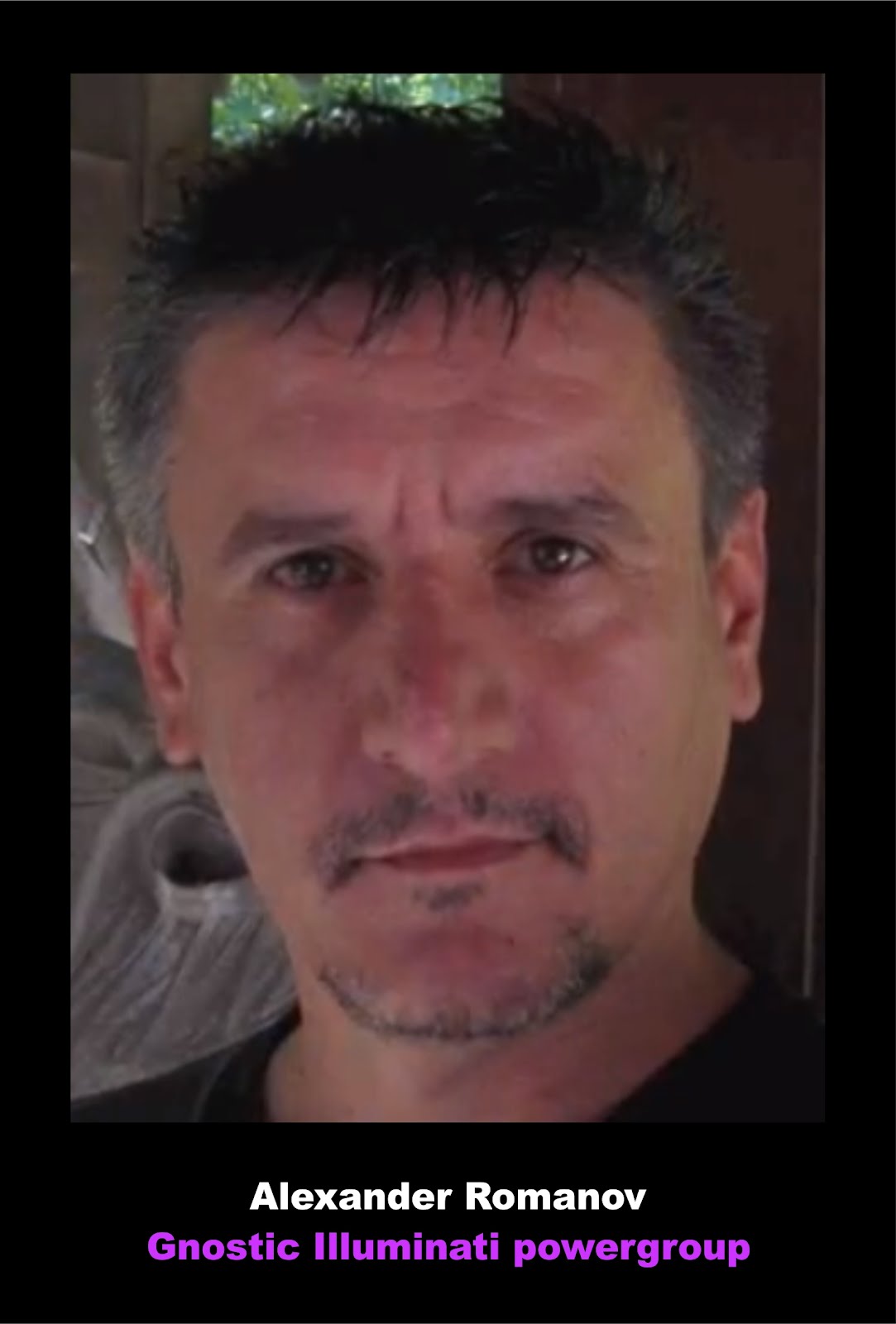 The Gnostic Illuminati powergroup is of ancient lineage, and through its spokesman, Alexander Romanov (Romanoff), claims to have initiated the American Revolution (1775–83), the French Revolution (1787–1799) and the Russian Revolution (1917). A smaller but related group, The Black Hand Society, led by one of Romanov's close relations, is said to have sparked off The First World War with the assassination of the Hapsburg heir to the throne of Austria-Hungary, Archduke Franz Ferdinand, in Sarajevo, Bosnia, on Sunday 28th June 1914.Alexander Romanov is understood to be the eldest grandson of Anastasia Romanov and the great grandson of Nikolay Alexandrovich Romanov (Tsar Nicholas II of Russia). Anastasia escaped the revolution against her family in Russia, was quietly secreted into what became Yugoslavia, and lived a long, covert and protected life there.More background here (20.02.12) and here (07.01.12 - YouTube video - 7 mins). And a series of fifteen short videos made by Alexander Romanov starts here (22.03.12).
http://alcuinbramerton.blogspot.com/

It seems that the mother of Willem III ( the netherlands) Anna Pavlovna Romanov was.  And for what I understand is that the royal family of Holland is illegale. It seems that Wilhelmina couldn't have children because of syphilis! The whole dutch family of royals are FAKE! http://translate.google.nl/translate?sl=nl&tl=en&js=n&p...

RE: Alexander Romanov and the Gnostics

Hi, Benjamin!
I took a look at some of the videos posted by the "Gnostic Illuminati Faction" you referenced in your free blog. So are you saying that this "Alexander Romanov" guy is for real? While some of his ideas are laudable, he also presents some rather strange and seemingly conflicted ideas.
On the one hand, he seems to promote meritocracy, but then he also claims to be "heir to the Russian throne." I find this oddly schizophrenic. Does he believe he is entitled to be "the One King" because of his birth? He also refers to himself as "grandmaster." I am always leery of those who proclaim themselves "masters," but when they put "grand" in front of it, it's doubly off-putting. It is like using both a penis pump AND Viagra to make oneself look big. Simply being humble and real seems preferable.
As to the very idea of replacing the current Satanic hierarchy with an "enlightened" hierarchy, I unequivocally assert that this is not to be the future of Earth humanity. It is true that beneficent leadership may be necessary while humanity relearns personal responsibility and sovereignty after generations of domestication, but any such transitional government must operate with clear goals leading to its own dissolution. If an enlightened hierarchy is allowed to stand, it will inevitably devolve into another cesspool of corruption and we'll ultimately find ourselves right back where we are now. Hierarchy is the organizational structure of less-developed beings, and it is time for us to move beyond the cycles of growth and destruction it brings about.
Our future is one of sovereign beings cooperating in a free-flowing, peer-to-peer manner. The days of kings are over on Earth, and any secret societies who think they can substitute their own flavor of control in place of the current structure are fooling themselves.
On another note, I am a subscriber to your paid blog and am perpetually intrigued by the narrative you provide for current events. As to whether your narrative is the most accurate one, well, the jury is still out as far as I'm concerned. I suspect the next few months will bring great clarity to that question and many others. That being said, I certainly hope you are right, and I send you my love and thanks regardless. This is quite a game we're in, isn't it? :-)
Sincerely, Ken

This Alexander Romanoff or Richard Sorge or whatever it is he calls himself has provided physical proof that he represents seriously powerful and dangerous people. That is why I opened a dialogue with him. It does not mean I agree with everything he says. My view is that any new pyramid type hierarchy must be completely transparent and meritocratic and structured so that anybody can climb to the top if they are good enough. I also think that we must avoid having a single leader at the top but always at least a small council representing all the main interest and opinion groups. Freedom of the press and transparency are the best way to keep corruption out of the system.