Thank You for having shared your Love & Wisdom, Dear Sai Baba

Bhagawan Sri Sathya Sai Baba is no more with us physically. He left his earthly body on 24th April, 2011, at7:40 a.m. due to cardio-respiratory failure.

We appeal to all not to rush to the hospital, but to remain calm and have Darshan in an orderly manner.


"Look out into the universe and contemplate the glory of God. Observe the stars, millions of them, twinkling in the night sky, all with a message of unity, part of the very nature of God. You can see the moon which orbits the earth on a perfect path, a path which can be calculated by scientists for centuries ahead.

What about your own path? Here, you are the scientist for your own life and you alone can plot the path that will take you into the future. You are plotting that path, day by day, with every thought and every act. All action results from thought, so it is thoughts that matter.

When you know the truth, you cannot blame others for the misfortunes of the moment; those misfortunes are of your own creation. What matters is to live in the present, live now, for every moment is now. It is your thoughts and acts of the moment that create your future. The outline of your future path already exists, for you created its pattern by your past. But even that outline can change, and will change, depending on your own thoughts and actions as each new day dawns and then dies away again.

This is the lesson for all. Do not be misled by what you see around you, or be influenced by what you see. You live in a world which is a playground of illusion, full of false paths, false values and false ideals, But you are not part of that world.

You must live in the world while you are there, but do not become part of it, for you are part of God and do not belong to the world. The life ahead can only be glorious if you learn to live in total harmony with the Lord. He is there always, but it is for you to take His hand and proceed through life, hand in hand with Him in all that you do and think.

You will never find peace and happiness in isolation, separated from the
omnipresent God. And yet this is how most people live their lives. Such lives are shallow and without foundation or direction, like a rudderless ship floundering at sea.

My children, take My hand and secure your freedom while I am here to help you. Leave behind all the past and forget it. Live in the present, in perfect union with the Lord and enjoy the peace of mind which it brings. Once you live in complete harmony with God, all problems and difficulties cease to exist.


"Honesty results from a pure heart and pure thought. It is also related to the desireless state because in that state, there is no need to distort the truth in order to achieve or obtain anything.

Honesty and truth are a way of life, the only way. It means more than just what the words imply, because it also means being true to yourself. The purity of heart is visible when the love of God is reflected so clearly and strongly that it shines through, even in the most adverse conditions and circumstances. Such a man has reached a point where nothing can touch him because he has come so close to God that his whole life is based on the solid foundations of truth, love and devotion to God. How can anything touch such a man?

Truth can spread, just like love, and those souls who reach the more advanced stage along spiritual path can act as pathfinders or guides for others. They are living examples of God manifesting Himself in man at the highest levels, a goal which everyone should seek. That is why I tell you to keep good company, because such people can help you just by their presence and example.

Purity, unity and divinity are words which are familiar to you. Honesty, truth and purity are all one and they will lead you on to divinity, the true state of man at the highest level."

So do I Antonela. He walked his talk and set an example.

The Miracle of Pure Love ~ http://media.radiosai.org/www/Rama_Navami_Special_Video.html

As you might know, during his life there were massive smear campaigns against Sai Baba. 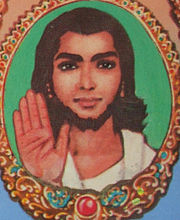 Why are you smiling !?

That will brighten my day...

Why are you brighten your day !?