Please Stop The Meter On Your Internet Use In Canada Now ~ Before We Pay A Lot More? 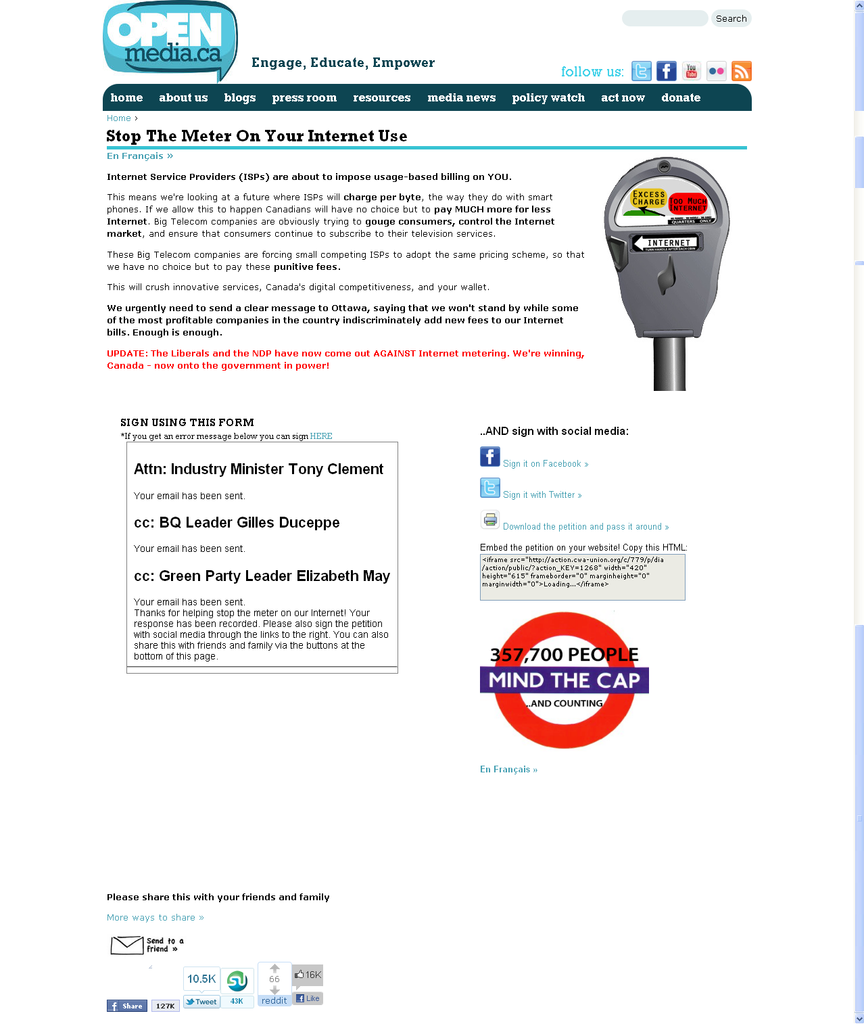 The more people that join this campaign, the more powerful our call will be.

Please help spread the word -- tweet or email the following link, and share it on Facebook.
Tell your family, friends, co-workers,
and random acquaintances to join the force against usage-based billing and a metered Internet:
URL to email: http://stopthemeter.ca
Share on Facebook: http://on.fb.me/hZf9YW
Tweet with Twitter: http://bit.ly/gdOBtF
Make a donation to help us stop the meter at http://openmedia.ca/drive.
(Donating to us will be less expensive than paying punitive fees.)
- The OpenMedia.ca Team
The CRTC just decided to let your Internet Service Provider put a meter on your Internet!
Bell Canada and other big telecom companies can now freely impose usage-based billing
on independent Internet Service Providers (indie ISPs) and YOU.
Big Telecom companies are obviously trying to gouge consumers, control the Internet market,
and ensure that consumers continue to subscribe to their television services.
This means we're looking at a future where ISPs will charge per byte,
the way they do with smart phones.
If we allow this to happen Canadians will have no choice but to pay more for less Internet.
This will crush innovative services, Canada's digital competitiveness, and your wallet.
We need to stand up for the Internet.
Sign the Stop The Meter petition at: http://StopTheMeter.ca
Want to know more?
Here’s the lowdown:
This decision is a blow to consumer choice, to access, and to free expression.
Independent Internet service providers (ISPs), such as TekSavvy,
pay incumbent telecoms like Bell for access points in their networks.
In applying usage-based billing (UBB) to these indie ISPs, the CRTC has allowed Bell
to determine and limit how many gigabytes of usage
their independent competitors can provide to their customers.
- This severely limits competition in the telecommunications market,
which is bad for innovation and diversity of content.
- This also means that the cost will necessarily be passed down to you, the consumer.
- Usage-based billing, or metering discriminates against certain forms of information
in so far as it charges consumers more for content that requires the use of a large amount of gigabytes,
such as audio and video.
- This also means that those who produce media-based art, and depend on the Internet
to show the world their work, are less able to produce and disseminate their content freely.
This means less innovation and more control of art, film, music, and other forms we may not yet know of!
Sign the petition and save the freest medium we have ever known (again!).
Stop the Meter and save our net!
Read more at SaveOurNet.ca:
http://saveournet.ca/content/what-does-usage-based-billing-mean-net...
Read more at OpenMedia.ca: http://openmedia.ca/blog/crtc-decision-all-bell-and-usage-based-bil...
Read TV Versus The Internet by Steve Anderson: http://thetyee.ca/Mediacheck/2010/10/06/TVversusInternet/
Read more at CBC.ca: http://www.cbc.ca/technology/story/2010/10/28/crtc-usage-based-bill...
Namaste