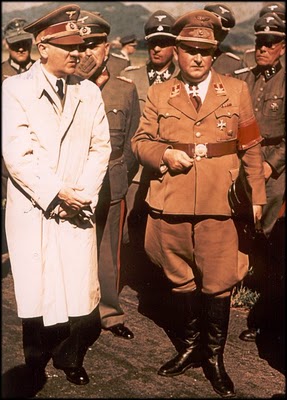 Nazi Pary Secretary Martin Bormann was at the heart of the Nazi apparatus.

Louis Kilzer examined the wire traffic between the spy known

as "Werther" and Moscow and determined that only Bormann

"The Soviets were able to ask very detailed questions about Nazi defenses and intentions.

The result was the decisive Nazis defeats at Stalingrad and Kursk.

Bormann had been as useful to Russia as fifty Red Army divisions," Louis Kilzer writes.

The second most powerful man in Nazi Germany, Martin Bormann, was a "Soviet" (i.e. Illuminati) agent who ensured the destruction of both Germany and European Jewry.

Thus, he advanced two of the Illuminati's main goals: integrate Germany into a world government by annihilating its national, cultural and racial pretensions, and establish Israel as the Masonic banker's world capital by threatening European Jews with extermination.


The Illuminati are a loose alliance of Jewish finance and the British/America/European aristocracy joined by marriage, money, and belief in the occult (Freemasonry). Winston Churchill, a Freemason whose mother was Jewish, fits this description perfectly.


Nations (Britain, US, Israel) movements (Zionism, Socialism, Nazism, Communism) and people (Americans, Germans, Jews) are their pawns to be sacrificed to their demented megalomaniac scheme for global dictatorship. Bormann's career illustrates how they orchestrate wars to advance this long-term objective.


Martin Bormann (1900-?) was the organizer, treasurer and paymaster of the Nazi Party and controlled its powerful machine. He was the contact with Illuminati bankers and industrialists who financed the Nazi Party and donated millions to Hitler. As Deputy Fuhrer and Hitler's Secretary, Bormann signed Hitler's paycheck and managed his accounts. He determined whom and what Hitler saw, and acted in his name.

Goering said "Bormann stayed with Hitler day and night and gradually brought him so much under his will that he ruled Hitler's whole existence." ("Martin Bormann" by James McGovern, p.160)

Hitler made Bormann the Executor of his will. Bormann, not Hitler, owned the Berghof. "The entire complex on the Obersalzberg, consisting of 87 buildings and worth over one and a half million marks, was legally registered in Bormann's name. (McGovern, p.128)

In 1972 Gen. Reinhard Gehlen (head of Wehrmacht Soviet Intelligence) revealed that Bormann had been a Soviet spy, a view shared by many top Nazi generals and officials including Gottlob Berger, a SS Lieutenant General who knew Bormann well. "Bormann did the greatest harm of anyone," Berger testified at Nuremberg. (McGovern, 181)

The implications are staggering. Remember what Winston Churchill said. "This war is not against Hitler or National Socialism but against the strength of the German people, which is to be smashed once and for all, regardless whether it is in the hands of Hitler or a Jesuit priest." (Emrys Hughes, Winston Churchill, His Career in War and Peace p. 145)


The Nazi Party was created, and the Second World War staged in order to lead the German people into a diabolical trap, after fatally compromising them morally.


In "The Bormann Brotherhood" (1972) William Stevenson says Bormann "gave the lowest priority to the fate of Germany...He was concerned instead with a future based on Nazi philosophy, financed by Nazi loot, supported by a personally loyal Brotherhood..." (62) Is this the Illuminati?

It is possible that the next world war also will be staged, this time to undermine the United States.

It is unlikely that Bormann perished in war-torn Berlin, as the Illuminati would like us to believe. A man who carefully prepared for the survival of the Reich by setting up 750 corporations in neutral countries would have provided for his own escape. There have been reports that the Russians rescued Bormann and set him up in Moscow. Other reports placed him in South America. Adolph Eichmann's eldest son, Horst claimed he had many conversations with him in Argentina. (McGovern, p.194)

Two-time Pulitzer Prize winner Louis Kilzer makes the case that Bormann was a "Soviet" spy in his book "Hitler's Traitor" (2000). He examined the wire traffic between the spy known as "Werther" and Moscow and determined that only Bormann had access to this information. Bormann told Hitler he wanted a record for posterity and had stenographers transcribe Hitler's war conferences.

The Soviets were able to ask very detailed questions about Nazi defenses and intentions. The result was the decisive Nazis defeats at Stalingrad and Kursk. "Bormann had been as useful to Russia as fifty Red Army divisions," Kilzer writes. (61)

"His value to Stalin began early. In 1941, when Germany could have used millions of Ukrainian nationalists to defeat Soviet rule, Bormann decided that they deserved only, "enslavement and depopulation. ...Faced with ... genocide by the Germans or political domination by the Soviets, the Ukrainians chose to live and by so doing ruined German hopes for an easy conquest." (261)

Borman used the Nazi defeat at Stalingrad as an excuse to begin the extermination of Jews, the second Illuminati goal.

In the words of the Nuremberg prosecutor, Bormann was a "prime mover in the program of starvation, degradation, spoliation and extermination." He shielded Hitler from the grisly details, forbidding Himmler from discussing the subject with Hitler and filing Himmler's reports. (261)

"Bormann's role with the Ukrainians and the Jews was only part of his devastating effect on the Third Reich," Kilzer writes. He blocked Albert Speer's attempt to move the economy to a "total war" footing until it was too late. "Bormann's influence," Speer concluded, "was a national disaster." (263)

Kilzer goes into great detail about Bormann's contacts with the Soviet espionage system, profiling many of his handlers. Even one of Bormann's mistresses, Marie Rubach Spangenberg, was active in the German Communist underground. (264)

Bormann encouraged Hitler to ignore the threat of encirclement at Stalingrad. Hitler's decisions "ceased to have anything in common with the principles of strategy and operations," General Halder noted in his diary. (McGovern, 82)

Bormann won Hitler's total allegiance by pretending to be his ruthlessly efficient instrument. When Bormann was criticized, Hitler replied, "Everybody has failed me but Bormann...whoever is against Bormann is also against the State! I'll shoot the lot of them..."(McGovern, 101.) And, "Bormann's proposals are so exactly worked out that I need only say yes or no..." (98)

Bormann subtly influenced Hitler to fire competent generals and did nothing to interfere with the gradual poisoning of the Fuhrer by his personal physician, Morrell.

The question remains, "Was Hitler himself a traitor?" Did he also serve the Illuminati? Kilzer remarks that Hitler was surprisingly lenient to dissent within the ranks and cultivated a "culture of treason." (Kilzer, 6) Was Hitler aware of Bormann's role and played along? I think Hitler was complicit.  Nazism was a trap.


William Stevenson provides a suitable conclusion: "Bormann represented secret power; and in our disheveled human condition, we suspect that the trappings of democracy are more of a dangerous camouflage...that real power begins where secrecy begins. Martin Bormann ... possessed that secret power...to such a degree that he was able to escape the gallows." (9).

Bormann's example suggests that the Illuminati modus operandi is to empower someone who is predisposed or even brainwashed  to do what they want. While he still has personal volition, they subtly manipulate him.

The lesson of this story is that the "news" upholds the "camouflage of democracy." Don't pay too much attention or invest your best energies. History is a play. The Illuminati control all the politicians who stand a chance.They control the mass media.


We live in a world where the dominant elite has organized into a sinister secret society to plot against humanity. It is creating a "New World Order" symbolized by the unfinished capstone on the pyramid on the US Great Seal.


Its symbols are everywhere but we are not allowed to protest them. Success depends on our willingness to betray our fellow citizens, nation and civilization and to allow this malignant power to grow in our midst.

Bormann Rescued by the British?