Love Starved- Is Parable of the Long Spoons True?

Love Starved- Is Parable of the Long Spoons True?

Are we losing the ability to love? (or is it just me?)
The Parable of the Long Spoons  purports to describe our condition today: We are unable to give love so we do not receive it.
One day a man said to God, "God, I would like to know what Heaven and Hell are like."
God showed the man two doors. Inside the first one, there was a large round table with a large pot of stew. It smelled delicious and made the man's mouth water, but the people sitting around the table were thin and sickly. They were holding spoons with very long handles and each found it possible to reach into the pot of stew and take a spoonful, but because the handle was longer than their arms, they could not get the spoons back into their mouths.
The man shuddered at the sight of their misery and suffering. God said, "You have seen Hell."
Behind the second door, the room appeared exactly the same. There was the large round table with the large pot of wonderful stew that made the man's mouth water. The people had the same long-handled spoons, but they were well nourished and plump, laughing and talking.
The man said, "I don't understand."

God smiled. It is simple, he said, Love only requires one skill. These people learned early on to share and feed one another. While the greedy only think of themselves... [Author unknown]
Sometimes, thinking solely of our personal gratification, we tend to forget our interdependence with everyone and everything around us, so much so that we stop caring about them. But, as the parable makes it clear, by doing so, not only don't we help others overcome their suffering, but we're also unconsciously harming ourselves, since we are all connected on a very deep level. 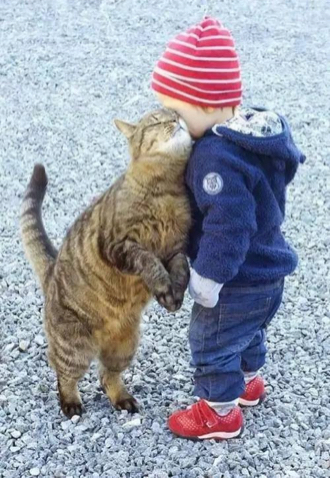 Reflections
Can you identify with this parable?
In the twilight of Christian influence, people today tend to be more self-centred than ever. As a result, while we have material plenty, most people strike me as emotionally starved.  A word of consideration or encouragement, a "like", is devoured like a fish thrown to a seal. I am no exception.
Why is it so hard for people to like, let alone love each other? Do people like each other as much as they used to? Are we depriving ourselves of needed love because we are so stingy? A Law of Nature is that you have to give in order to get. Have we lost that ability?