Is the March 19th Full Moon an "Extreme Super Moon"? (and will we have more earthquakes?)

I was somewhat intrigued by a Yahoo news item claiming that the upcoming full Moon of 20 March (Australian time, 19 March UT) would be the closest for 19 years. I was rather intrigued by this, especially as no source was given, so I started to hunt out information on Earth-Moon distances.

First a quick primer; the Moon has an elliptical orbit around the Earth (greatly exaggerated for illustrative purposes in the diagram to the left). When the Moon is closest to Earth, it is at perigee, and furthest, at apogee. The orbit of the Moon precesses around the Earth, so that sometimes perigee occurs at full Moon, sometimes at new Moon, and every time in between. Also for a variety of reasons the distances of closest and furthest approach can vary by up to almost 1,000 Km. When a really close perigee coincides with a full Moon, this can make for a good photo opportunity when combined with images from apogee.

But was the claim in the Yahoo article correct? I found the times of perigee and full Moons from 1991 to 2011 and present them in this table (sources, Inconstant Moon and Astronomy Australia 1991-2011).

As you can see, the Full Moons of 1992, 1993 and 2008 are all closer that that of 2011. So, the March Full Moon will be the closest for a less than impressive 3 years. You can also see that the March full Moon will only be 20Km closer than the January 2010 full Moon. Bigger, but not really exciting.

The Yahoo site also says “The full moon could appear up to 14% bigger and 30% brighter in the sky”. Umm, yeah. But can you see it? The limit of distances that someone with good vision can distinguish between is 1 minute of arc (about the width of a human hair). So, for the vast majority of people any difference smaller than 1 minute of arc cannot be seen.

Perigee and apogee as seen through a telescope. With the unaided eye, the Moon only appears half a finger-width wide, so the difference is much harder to see.

If you can wait until October the 12th, when the Full Moon is at Apogee, then it’s diameter will be 29.5 arc minutes, and you could notice a difference if you have a good memory, but it won’t be spectacular.

However, it will be a good photo opportunity, if you have a decent zoom on your camera, taking a photo of the Moon on March 20 and then again on October 12 you will see a decent difference (you need to use exactly the same zoom enlargement, see Inconstant Moon for instructions).

What about the other claims?

“The last time the moon passed close to the Earth was on 10 January 2005, around the time of the Indonesian earthquake that measured 9.0 on the Richter scale”

Sorry, the Indonesian earthquake was on December 26, 2004. I remember it well. Unless there is some way for the Moon to reach back in time, there is no relationship. There was a Full Moon on the 27th, but that was near apogee, when it was furthest from the Earth.

“Hurricane Katrina in 2005 was also associated with an unusually large full moon.”

No it wasn’t. The full Moon was on 19th August, and was a very ordinary 357612 km away, not an unusually large Moon at all (in fact, further away than the average perihelion distance of 357373 Km, making it the 18th closest since 1991). Katrina began on August 24, shortly before Last Quarter.

Now, it is at least plausible that the Moon could be associated with earthquakes. As well as the ocean tides we are familiar with, the Moon raises tides in the lithosphere, the very rock of the earth. These tides are small, around 30 cm compared to the ocean tides of a meter or more. However, these small earth movements, stretching and relaxing as the tidal bulge travels around the world, might be enough to set off an earthquake that was all ready to go in the first place.

There is some evidence that full Moons are weakly associated with shallow earth quakes (a less than 1% increase for these kinds of quakes). But is there any evidence that full Moons at close perigee are more likely to be set off earthquakes than any other full Moon? We can actually work out the Tidal Force involved using the following equation (and a little help from an Excel spreadsheet).

Okay, but what does that mean practically?

Well, let’s look at the ocean tides as a proxy for the lithospheric tides. Tides are complex, affected by local geographic features amongst other things, but this gives you an idea of how the lunar tidal force plays out. The maximum high tide at outer harbour after the March 6 New Moon at apogee was 2.5 meters, the predicted high tide for March 19 is (drum roll) … 2.6 meters. This is about a 4% increase in tide height for a 40% greater tidal force. So I wouldn’t expect much of a difference between the March 19 Full Moon, and any other full Moon.

The Yahoo article is almost completely wrong. But where did the information come from? It seems like it comes from astrologer Richard Nolle (similar language is used at accuweather and space.com, and both articles link back to Nolle). While the exact same language is not used in the articles, we have Mr. Nolle writing.

“….First and foremost, that means being mindful of the March 19 full moon 28° 48' Virgo. It’s arguably the year’s most extreme SuperMoon, for a couple of reasons: it’s the closest SuperMoon of the year, occurring within an hour of lunar perigee (the Moon’s closest approach to Earth): the Moon will look huge when it rises at sunset. And being so close to the vernal equinox, this SuperMoon occurs within hours of the moment the full moon crosses the celestial equator from north to south, just as the Sun crosses in the opposite direction. That makes this a major geophysical stress window, centered on the actual alignment date but in effect from the 16th through the 22nd. Of course you can expect the usual: a surge in extreme tides along the coasts, a rash of moderate-to-severe seismic activity (including magnitude 5+ earthquakes, tsunami and volcanic eruptions), and most especially in this case a dramatic spike in powerful storms with heavy precipitation, damaging winds and extreme electrical activity. Floods are a big part of the picture in this case, although some of these will be dry electrical storms that spark fast-spreading wildfires.”

As we have seen, the March 19/20 Moon won’t look particularly huge compared to most of the other Moons (unless you have a good memory for apogee Moons and acute eyesight). Tides are not going to be much of an issue (unless 0.1 meters floats your boat). Earthquakes etc. are only marginally more likely simply due to the full Moon effect alone, not the effect of Perigee. I have no idea where he gets the weather stuff from.

The tropical depression formed on August 23, actually four days after what was not a particularly impressive “SuperMoon” (357395 Km, 12 hours before the full Moon). Much closer perigee’s nearer Full and New Moons respectively aren’t associated with anything in 2005. 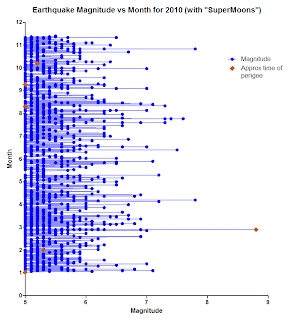 Graph of "supermoon" occurrence vs Earthquake occurrence and intensity. Click to embiggen.

And so it goes for the rest of his examples. By casting a sufficiently wide net, and using a rather broad definition of “superMoon”* Mr. Nolle can produce a wide range of spurious associations. After all, since there are on average 4 earthquakes of magnitude 5 or greater every day, it’s not too hard to find earthquakes within + or – 3 days of a full Moon near perigee. He gets excited about the February 27 “supermoon” (where the perigee occurs 18 h before the full Moon and is a rather unimpressive 357831 Km) near a 8.8 Magnitude quake and ignores the January 30 Full Moon (Perigee of 356592 Km 2 h after full Moon) which is nowhere near any reasonable quake.

Have a look at the graph to the left where I have plotted the occurrence of Mr. Nolles "supermoons" vs earthquake intensity and time. The two "supermoons" with the closest perigees closest to the actual time of Full Moon (where the tidal forces are greater) are down in the scurf of random magnitude 5 earthquakes, as are the 3 more dubious "supermoons". There is no uptick in magnitude 5+ earthquakes around these times as Nolle claimed would happen. Note all the activity nowhere near a "supermoon". The February 27 event is completely compatible with random association (times of perigee and full/new Moon from Inconstant Moon, Earthquake data here).

The take home message is that the March 19/20 full Moon will look much like any other full Moon, unless you have photographic equipment to image both it and the October 12 apogee Moon. The Moon will not cause horrible things to happen (well, maybe a very slight possibility of setting off a shallow earthquake, but not more than any other full Moon). As postscript, it’s rather sad that news sources, especially places like Space.com, don’t bother to do simple fact checking before going all breathless.

Oh yeah, the Bad Astronomer thoroughly debunks the idea that the March 19/20 "supermoon" had anything to do with the Japanese earthquake.

* His definition of “supermoon” is “a new or full moon which occurs with the Moon at or near (within 90% of) its closest approach to Earth in a given orbit.” But what does 90% of its closest approach mean? Is this as a percent of the distance at perigee? If so that’s a large chunk of orbit (since he classes the 27 February 2010 full moon as a “supermoon”, when perigee was 18 hours before full Moon, this would seem likely. Heck he classes the October 6 New Moon as a "supermoon" when perigee occurs a full day before the New Moon). An “extreme supermoon” is one at 100% or greater mean perigree. This definition is incoherent (but seems to be every full Moon that occurs within 4 hours of perigee judging by his table of extreme super Moons).

Comment by Bishop on March 18, 2011 at 9:13pm
Thanks jose. I was looking at the moon earlyer, beautifully clear night. I dont think ive ever seen the moon so bright...

Comment by Pat on March 18, 2011 at 8:05pm
Great research jose v...thanks for sharing.....I still think something big is about to happen and will very conveniently be blamed on the full moon.