It could be anything. At the moment "it" is the Amero. I'm not saying it is real, but I'm curious to know what others think. Some may say I'm a sucker for even thinking it could be.... but what if it is? I like the mystery.

Are countries real? They are not real to me in many ways, yet I can say they exist. It depends on who else thinks it is real. We don't need to ever use the Amero if we can find another more real way to live.

Money & countries are collective agreements. Does that make them real? Someone decided that they are real, then others believe it. I'm thinking about egalitarian non-stop summer camp villages in my mind, other realities that don't exist yet & asking others to believe in those possibilities. They're real in my mind. No $ or Amero needed.

North Bergen, NJ -- To the chagrin of the government, I have obtained new "AMERO" paper currency notes! You know, the "AMERO" . . . . the new currency that is going to replace the US Dollar, The Canadian Dollar and the Mexican Peso? Yea, the new currency that all three governments claim doesn't exist. . . . I have it. Here's what a 50 Amero note looks like:

In September, 2007 - over a full year ago - I first broke the story about AMERO coins being minted secretly at the Denver Mint. After that story ran, the Denver Mint announced on its web site that they were closing public tours of the Mint for 10 - 14 days in order to make renovations to the tourist area of the mint.

My sources inside the Mint, however, reported Treasury officials were outraged that someone had leaked info about the AMERO to me and they closed the Denver Mint to the public so as to secretly move the AMEROS out of the Mint to prevent further leaks.

In October, 2008, I received word that the U.S. government shipped 800 Billion AMEROS to the China development bank. I did a story on that (here) and obtained an actual AMERO coin from that shipment!

I placed a video of the coin on YouTube, showing the coin and explaining that there is a deliberate effort underway at the highest levels of our government to intentionally exhaust the dollar as a currency. Over 600,000 people worldwide watched that video.

Here we are, just two days later and my sources have once again come through; this time with proof the government is secretly printing new AMERO paper currency. 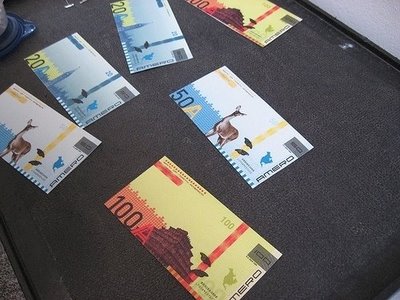 Not a single American citizen has been officially asked if they want a new currency. Not a single member of Congress has voted on authorizing a new currency. Yet a new currency is already being printed and quietly distributed around the world. This is being done without the consent of the American people, without a vote by Congress and has been intentionally covered up by every official who has been questioned about it.

The REASON they are creating a new currency has to do with how they plan to get rid of our national debt. On October 16, 2008, the "Global-Europe Anticipation Bulletin" told its subscribers that the present U.S. Dollar will be demonetized (it won't be "money" anymore) and a new currency imposed. "Old dollars" will be devalued by ninety percent (90%).

Think about that for a moment. A 90% devaluation. That means checking accounts, savings accounts, IRA's 401-K's, Pension plans, Certificates of Deposit. . . . are all worth ninety percent LESS than previously.

This AMERO currency will allow the government to literally grab 90% of all our life savings and owe 90% less than they presently do in one fell swoop! They get out of debt and the rest of us are left totally destitute. Broke. Busted. Poor. Helpless.

I believe the people perpetrating this secret currency change are in for personal visits of a violent nature. I think there are folks out here in real America who will not take kindly to having been deliberately lied-to.

I believe my fellow Americans might -- just might -- decide it is time to . . . . . "discipline". . . . . the public officials who have undertaken this outrage without our consent.

It's a tough thing to have to physically discipline a mis-behaving adult, but I say now, I'm up for doing just that.

There are officials in this country who deserve to get the shit kicked out of them and I really look forward to having the chance to do it. If they think their puny little Federal Reserve Police force can do anything about it, they're sadly mistaken.

PLEASE SPREAD THE WORD ABOUT THIS IMMEDIATELY. If they are already printing paper currency, the destruction of the US dollar cannot be far away. We are ALL in grave danger of losing our life savings to this currency scam.............

Comment by Andy (UK) on December 17, 2008 at 11:39am
nesara doesnt exist
we are being screwed like it or not, no one seems to care (up there), no show means we are left here to manage this all ourselves, we are f@@@@d

Comment by Corazon on December 17, 2008 at 12:01am
Non-violence for sure! I was posting this as-is to see if any of you have more info. Thanks for your comments.

Comment by sunbeam on December 16, 2008 at 9:09pm
May I suggest that we do not condone violence for any reason. We are aware of the lies but trying to muster support to kick the sh*# out of anybody is not the way to go, my friend.

Comment by Rebecca Shannon Ling on December 16, 2008 at 9:02pm
from a designer's point of view, whoever who does the designs for this 'currency' should be fired. how mechanical does it look??

love and light to those hangin on desperately to power