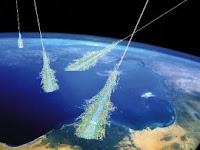 Thin Ionization Calorimeter, a NASA funded balloon-borne instrument high over Antarctica) states "This is a big discovery, It's the first time we've seen a discrete source of accelerated cosmic rays standing out from the general galactic background. This electron excess cannot be explained by the standard model of cosmic ray origin, there must be another source relatively near us that is producing these additional particles." The results show an unexpected surplus of cosmic ray electrons reaching 300-800 billion electron volts. They have come to the conclusion that the source would indeed need to be within 3,000 light years of the sun and is most likely to be some like of pulsar, mini-quasar, supernova remnant or an intermediate mass black hole. "Cosmic ray electrons lose energy during their journey through the galaxy," said Jim Adams, ATIC research lead at NASA's Marshall Space Flight Center in Huntsville, Ala. "These losses increase

with the energy of the electrons. At the energies measured by our instrument, these energy losses suppress the flow of particles from distant sources, which helps nearby sources stand out." An article published a week later relieved where the source may be coming from. A Los Alamos National Laboratory cosmic-ray observatory has seen for the first time mapped two distinct hot spots that appear to originate near the constellation of Orion. FYI, that's the same area that it's said planet X originates fromhttp://www.attainablemind.com/2009/03/2012-world-will-not-end.html

Comment by simpleman on April 23, 2010 at 8:13pm
You are welcome, Pat. I just wanted to add some scientific backup of the spiritual matter at hand. Science now points toward to a super intelligence. NASA scientist still argue that gravity is the dominant force in the universe. They are overlooking the electric model. Electrical currents create magnetic fields. Where there is one, there is the other. They go hand in hand. So the universe is electrical in nature. I also that there are filaments connecting each star like a neural network of the brain, so the universe in unison is conscious.

Comment by Pat on April 22, 2010 at 8:01pm
Thanks Simpleman for the scientific explaination, which I don't pretent to understand because physics is not one of my strong points, but I do appreciate the thought behind the post.... My thoughts behind posting this blog were more of a spiritual nature and I wondered whether this might be the scientific explaination behind the extra light and energy coming to earth at the moment ....I believe that everything spiritual has a scientific explanation...... I wish I had paid better attention during my physics lessons at school.

Comment by simpleman on April 22, 2010 at 11:23am
Scientists at the Research Institute for Particle and Nuclear Physics in Budapest are focusing their attentions on a strange star system known as Cygnus X-3, composed of a collapsed compact star, thought to be a neutron star, in tight orbit with a large Wolf-Rayet type star. The former steals, or accretes, helium gas from the surface of the latter which it superheats to create a so-called accretion disc of super-hot plasma (ionized gas) around its equator. Excess matter is sporadically ejected from the compact star along its line of axis as powerful particle jets that penetrate deep space, like galactic light beams, reaching distances of up to tens of light years and destroying anything in their path.
Gergely Gabor Barnaföldi, and collaborators P. Levai and B. Lukacs, the Hungarian research team involved in the work, investigated whether a state of extreme gravity exists between the two individual components of Cygnus X-3. This gravitational field is so strong that it forces an interplay between the normally inactive fifth dimension and matter contained within the core of the neutron star. This results in the production of exotic forms of sub-atomic particles known as strange quarks. These then penetrate through the surface and collide with other types of sub-atomic particles produced in normal space-time, creating ultra-high-energy cosmic particles with unique characteristics.
This extraordinary state of affairs might help explain a 25-year-old mystery of particle physics. Since 1981 particle detectors located deep underground in both the USA and Europe have detected unique cosmic particles inbound from Cygnus X-3. They come in 4.79 hour cycles, reflecting the star system's unique 4.79-hour orbital signature. This can only happen if the cosmic rays are arriving directly from source, implying that they travel the estimated 30,000 light years distance from Cygnus X-3 without either being deflected by galactic magnetic fields - a characteristic of charged particles - or decaying en route to Earth. This means that they have to be long-living neutral particles, as well as hadrons - strongly interacting particles - since they produce heavy showers of secondary particles known as muons when they hit the upper atmosphere.
When combined together, the specific characteristics of the strange particles from Cygnus X-3 become impossible to categorise. Ultra-high energy cosmic gamma rays have been proposed, although these would not produce anywhere near the amount of muon showers. Neutrinos too have been proposed. They arrive directly from their cosmic source and are also not affected by galactic magnetic fields. However, since they have virtually no mass, neutrinos very rarely interact with matter, and pass through the Earth, and us, without any kind of effect. This leaves only the neutron, a sub-atomic particle which although neutrally charged, and known to exist in compact stars, decays in a matter of minutes.
Under any normal circumstances, there is no way that neutrons might reach Earth directly from Cygnus X-3, even taking into account that as a potential cosmic particle accelerator this suspected neutron star shoots out particle debris in our direction at very close to the speed of light, meaning that any ejected particles can take advantage of Einstein's relativity law, which states that the closer something comes to the speed of light, the faster time goes by in the outside world. Such a rule implies that although any particle travelling at virtually the speed of light from Cygnus X-3 will take around 30,000 light years to reach her, from its point of view it will have existed for just a few minutes. However, this process is controversial, and is not thought to fully explain the longevity and peculiar properties of cygnets, leading scientists to speculate that they constitute the existence of some previously unknown particle.