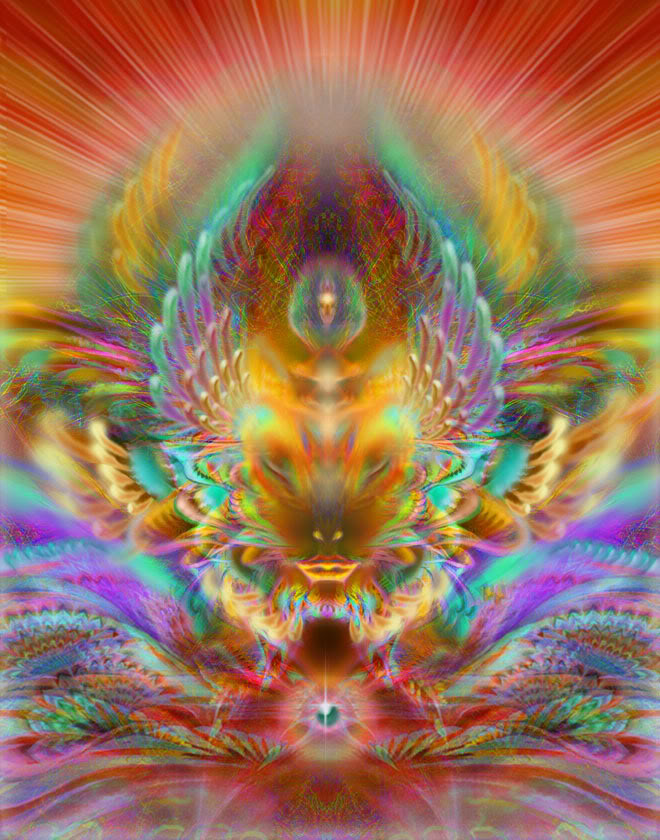 Q: Can we help our children and others that we love to transcend their unconsciousness?
Or is it necessary for them to go through it on their own?
ET: There are more children born nowadays who may not have to go through
the deep unconsciousness that [adults] had to go through, certainly that I had to go through.
And also there are more children born nowadays to parents
who are in the awakening process, or relatively conscious parents.
In my generation, I can’t think of any conscious parents.
There might have been some, but it was rare.
They are still rare now, but much less rare than before.
I loved my parents, but they were deeply unconscious.
So, the question is how to help the children stay relatively conscious,
so that they do not get drawn into the mass unconsciousness that still pervades mass culture,
and the technology that promotes unconsciousness and addictive behavior.
The most powerful teaching is not what you say or do to them,
but your state of consciousness at home.
That’s the very foundation for teaching your children.
It has nothing to do with teaching, the foundation for transmitting consciousness
is not even wanting to transmit consciousness to them,
but to hold the space of presence as you interact with them at home.
Also, to hold presence as much as possible as you interact with your husband.
There’s a relationship there that will infect them, with either presence or painbody.
The most vital thing is, before even thinking of doing anything, is being conscious.
They observe how you behave, and they take that on board to some extent.
Of course, another influence is mass culture, as they spend more time at school.
Occasionally there may be things that you can point out to them,
so that they stay in touch with immediate experience, sensory experience.
Don’t let them lose touch with nature.
So many children these days are so involved in technological games,
they don’t experience nature anymore.  It’s something totally alien to them.
That’s a very harmful thing.
It’s a great deprivation, to be deprived of the immediate experience of the natural world,
which puts you in touch with deeper levels of your own being.
To have an animal at home is a great help.
If children relate to the dog, it’s a non-conceptual relationship.
You can touch the dog, look after the dog.
Getting out into nature periodically, without the gadgets that [kids] usually have.
[Watching] television is a state of semi-comotose hypnosis.
It may not be easy because everybody else is doing that kind of thing.
It’s not that you have to eliminate that kind of activity completely,
but discourage them from spending 100% of their free time with those things.
Take them into nature, without the gadgets.
Encourage them to direct sensory experience – to touch, to feel, to look at things.
Encourage them to not confuse conceptual labeling with true knowledge or experience.
When [kids] are learning language, encourage them not to equate concepts with reality.
When you teach them what something is, encourage them to touch it,
to see it, to feel it, not just to say, “this is called such-and-such”.
Continue to look at it.
Otherwise, you stop experiencing – and all you have is a mental label.
Questioner: They label themselves, as well.  I’ve noticed this with my daughter,
she will come home and say “I’m stupid” at this or that.
ET: That’s a good way to encourage her not to identify with her thoughts.
So if you can point out that it’s just a thought,
and that they don’t have to believe in every thought that comes.
If you can somehow work with them to have them realize that they are not their thoughts,
so that there’s a space between them and their thoughts, to observe their thoughts,
and when thoughts come you can explain “it’s no more than a thought”
and it may not be the reality, it may not be true.
Most humans have painbody.
Dis-identify from the painbody by pointing out that this is the painbody.
I’ve often said not to call it “painbody” for the children.
Give it a name, call it something, and mention it when occasionally they get taken over by it.
Point it out to them afterwards, “what was that, that took you over?”
so that an awareness develops.
There’s the emotion, and there’s the awareness.
Encourage that kind of thing, so that they are able to look at the emotion
that takes them over from time to time.
And after the event, not during the event initially, say to them,
“What was it that took you over when you started screaming yesterday?
What was that?” and say, “What does it feel like?”
or invent some game, so that you can make it into something that they can be aware of.
Then “let’s wait for next time it comes, and see how it feels”.
If you have it, then you can point out after you’ve woken up from your painbody –
“the same thing happened to me”.
The key in education is to show the possibility of being aware,
rather than always being identified with what arises in their mind.
© copyright 2008-2011. Eckhart Tolle . All rights reserved. http://www.eckharttolle.com/

Comment by Trudy on August 19, 2011 at 5:02pm
WOW what a Beautiful Picture ...
I talk a lot with the youth about the coming times, in the begin they laughed at me ... nowadays they tell me their dreams and ask me questions about the coming photon belt ^L^

Comment by patrick on August 19, 2011 at 4:47pm
Outside in nature without the gadgets, great advice.