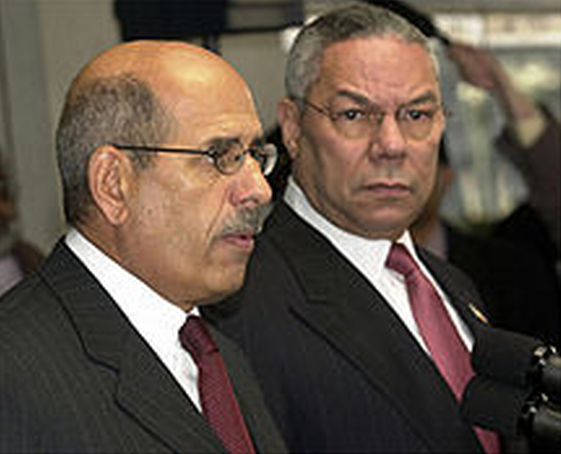 Egypt is Another Soros "Color" Revolution

The turmoil in Egypt is another  contrived, Illuminati backed "color" revolution
designed to install puppets more subservient to their London-based masters.
Over the last decade, we have seen such "revolutions"
in Serbia, Georgia, Ukraine, Kyrgyzstan,
Mongolia and recent failed attempts in Burma, Iran and Thailand.

"Human rights" and "democracy" is always the pretext for these Illuminati gambits,
dating back to the French and Russian Revolutions.
They take advantage of genuine grievances to hoodwink the public and gain power.

This time there was no color scheme tip-off but the unanimous support by
the Illuminati-controlled mass media was enough.
You wouldn't hear about it otherwise.
(For example, did you know that real nationalists took over
the government of Hungary?)

The confirmation is the man they are touting to replace Hosni Mubarak.

Globalist widget, Mohammed El Baradei is a trustee of the "International Crisis Group"
an "independent" non-profit group run by bankers to incite revolutions
and profit from them.
His fellow trustee is none other than the ubiquitous Rothschild front man,
George Soros.

El Baradei, who recently resigned as Director of
the International Atomic Energy Agency,
is being groomed by the Illuminati to replace Mubarak.
(He and his agency won the 2005 Nobel Prize.)
In April, he gave a speech at Harvard saying he was "looking for a job"
and wanted to be "an agent of change and advocate for democracy" in Egypt.
This is code for local boss in the NWO banker tyranny.
(Barack Obama has taught us about "change.")

In February, El Baradei was part of a new non-party political movement called the
"National Association for Change"
which included a leader of the banned Masonic Muslim Brotherhood.
The Muslim Brotherhood is a proxy for Britain's MI-6 masquerading
as Muslim fundamentalists.
In November they were roundly defeated in elections,
so this "revolution" seems to be their answer.
Mubarak wisely jailed their leaders.

On Thursday, El Baradei returned to Egypt to lead the demonstrations.
Friday he and his supporters were subjected to water canons and batons.
Today, he announced:
"We are seeking a change of regime.
President Mubarak should step down.
We should head towards a democratic state through
a new government and free democratic elections...
The whole world should realize that the Egyptians
are not going home until their demands are realized...
We are talking about taking
the Pharaonic dictatorship."

Egypt has accused the US of helping to engineer this revolt by training "activists."

Is it going too far to say that removing Mubarak
would be a victory for Israel in its expansion
from the Nile to the Euphrates?
Their surrogates are already in Baghdad.

This article is not intended to garner sympathy for the Mubarak regime
but  merely to point out that this turmoil is about
the Illuminati tightening their grip on Egypt.
Imagine a Mafia gang that has been raking off a share of profits
for decades.
One day it decides to increase its take by eliminating the middle man.
At the same time, it can create turmoil
which always provides new opportunities.

One thing is for sure:
Our "leaders" care little about human rights and democracy.
The Illuminati agenda ultimately is to degrade,
disinherit and and enslave us mentally and spiritually, if not physically.
The Egyptian turmoil is another step in this direction.
Henry Makow Ph.D