Earth's Core ~ A Spinning Crystal Ball, the Size of the Moon

Researchers are now probing what may turn out to be the most curious small body the solar system has yet presented for scrutiny: a globe the size of the moon that appears to be a well ordered crystalline entity. This body is poised little more than 5,000 kilometers away, yet it is completely invisible. Located at the center of the earth, it is known simply as the inner core. Two seismologists have just shown that this strange crystal sphere is turning slowly within the rocky and liquid metal enclosure that keeps it all but hidden from scientific investigation.

Geophysicists realised decades ago that a solid inner core exists, but they knew precious little else about it. They believed the inner core and the liquid shell surrounding it were made largely of iron, yet other features of the heart of the planet remained enigmatic.

But during the 1980s, seismologists examining earthquake waves that pierce the inner core made a startling find. Rather than being "isotropic" (the same in all directions) in its physical properties, the inner core proved to be somewhat like a piece of wood, with a definite grain running through it. Waves traveling along the planet's north-south axis go 3 to 4 percent faster through the inner core than those that follow paths close to the equatorial plane.

Geophysicists have struggled to explain why this grain (or "seismic anisotropy") should exist. The leading theory is that at the immense pressures of the inner core, iron takes on a hexagonal crystal form that has inherently directional physical properties. Some force apparently keeps the hexagonal iron crystals all in close alignment.

Lars Stixrude of the Georgia Institute of Technology and Ronald E. Cohen of the Carnegie Institution of Washington note that whatever texturing mechanism operates to form the anisotropic grain of the inner core, it must be almost 100 percent efficient. Otherwise the seismic anisotropy would not be as large as measured. "The very strong texturing indicated by our results suggests the possibility that the inner core is a very large single crystal," they boldly stated in an article published last year in Science.

The seemingly absurd notion - that a body the size of the moon could be just one big crystal - is less ridiculous than it sounds. The central core may have grown gradually to its present size as liquid iron at the bottom of the outer core solidified and attached itself to the inner core. That process would occur exceedingly slowly, with few outside disturbances - just like the conditions that favor the growth of large crystals in a lab. Slow solidification of iron might have allowed the inner core to grow quietly for billions of years, becoming in the end a gargantuan single crystal, more than 2,400 kilometers across.

But slow crystal growth does not explain the alignment of the inner core's axis of anisotropy with the earth's rotation axis. The process also fails to account for the seismological evidence that the anisotropic grain is not uniform. Xiaodong Song, a seismologist at Columbia University's Lamont-Doherty Earth Observatory, says that the anisotropy at the top of the inner core "is likely to be very weak - less than 1 percent." So it would seem that some other physical mechanism must keep the deeper hexagonal iron crystals in line.

Although several explanations have been proposed, the most reasonable theory calls on internal stress (generated by the earth's rotation), which is strongest along the north-south axis. Thus, the hexagonal iron that constitutes the inner core could crystalise (or recrystalise) in parallel with the spin axis - as do the mica flakes that form in rocks squeezed by tectonic forces. Internal stress could thus keep the inner core's grain well aligned with the spin axis - perhaps too well aligned. It turns out that the grain of the inner core is not exactly parallel to the earth's rotation axis: in 1994 Wei-jia Su and Adam M. Dziewonski of Harvard University reported that the axis of anisotropy is in fact tilted by about 10 degrees.

At about the same time, Gary A. Glatzmaier of Los Alamos National Laboratory and Paul H. Roberts of the University of California at Los Angeles were working on a computer simulation of how the earth's magnetic field operates. Although the tumultuous churning of the outer core's liquid iron creates this magnetic field, Glatzmaier and Roberts found that the influence of the solid inner core was needed for proper stability. Their modeling also indicated that the inner core may be shifting slowly eastward with respect to the earth's surface, impelled by persistent fluid motions at the base of the outer core.

Reading that result and realizing that the seismic grain of the inner core was not wholly aligned with the spin axis, Song and his colleague Paul G. Richards decided to look for seismic evidence that the canted grain of the inner core was indeed swiveling around relative to the rest of the earth. Their idea was to examine seismic recordings of waves that traveled through the inner core decades ago and to compare them with more recent signals. If the core rotates, the time it takes these waves to traverse the inner core should change systematically. The challenge was to find recordings of seismic waves that passed close to the north-south axis and to devise a way to compare them precisely enough to detect the slight differences that result from less than 30 years of change (the span of seismic records). But they solved both problems and found evidence of rotation quite quickly. "Everything happened in three weeks," Richards notes.

The team started by looking at seismic traces recorded in Antarctica caused by nuclear tests made at Novaya Zemlya in the Soviet Arctic. Traveling from one pole to another, these seismic waves penetrated the core. Examining data that had been collected over the course of a decade, Song and Richards observed what appeared to be a change of two tenths of a second in the travel time of the waves that passed through the inner core as compared with those that just skirted it. They then scrutinized a set of seismic recordings made in Alaska of earthquakes that occurred between the tip of South America and Antarctica and found similar results to confirm that the inner core was in fact moving. They presented their discovery in the July 18 issue of Nature.

Although the detection of inner core movement was itself a remarkable experimental achievement, the correspondence in direction and speed of this motion (eastward at a degree or two a year) with the predictions of Glatzmaier and Roberts was more remarkable still. But geophysicists are far from having figured out the workings of the inner core. No one yet understands for sure what causes its anisotropic grain. Nor can scientists explain why the anisotropy should be tilted. According to Glatzmaier, "It's anybody's guess at this point."

You're welcome my friend. There are many ways to ground oneself. The key is always, which one works for you and the one you are most comfortable with,

Thank you. Wow! This miniature of yours, an Absolute Gem, for sure! I love crystals! 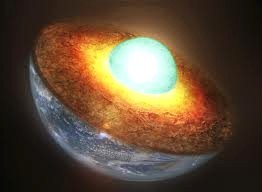 How wonderful to be able to see it!!!!

I have a miniature of it in my bedroom, hehehe: 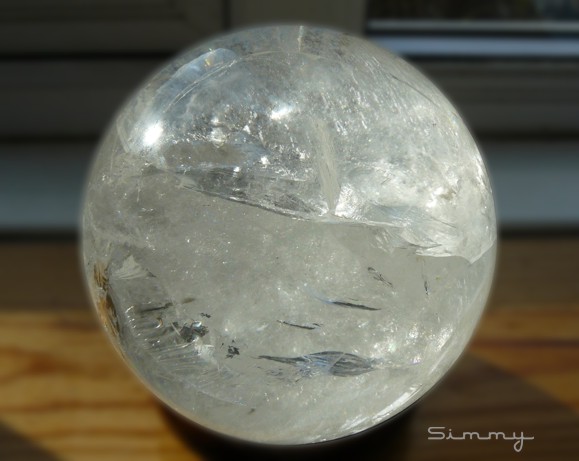