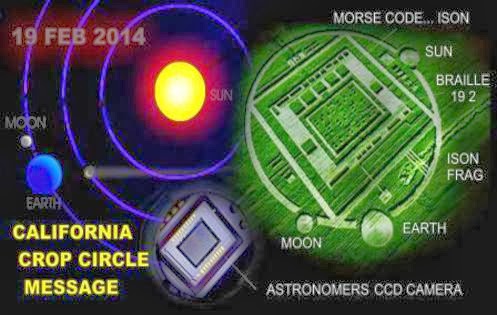 . We learned from several sites, including cropcircleconnector.com, the pictogram that appeared on a wheat field in California, seems to have been decoded.
The following s what researcher Paul Jacobs in cropcircleconnector.com site:
The overall image of the pictogram appeared in Chualar in California, it may be that of a "polar clock" (see polarclock).
As you may recall, another "polar clock" was discovered June 2nd 2012 in the areas of driving Manton near Marlborough, Wiltshire - England (see link).
In Manton Drove crop seemed to describe an event that would be associated with the landing of the Curiosity Mars Rover NASA, which in fact occurred two months after the date indicated on August 5, 2012.
This new "polar clock" in Chualar, California shows a "bright comet long tail", so as expected the astronomical event: 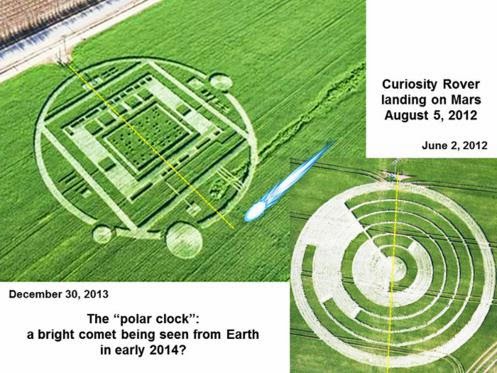 All "inside the pictogram can see or perceive a kind of circuit or" chip CCD "that you usually find in a digital camera. This can involve many factors, including the fact that many people on Earth will be able to shoot a bright comet in first months of 2014: 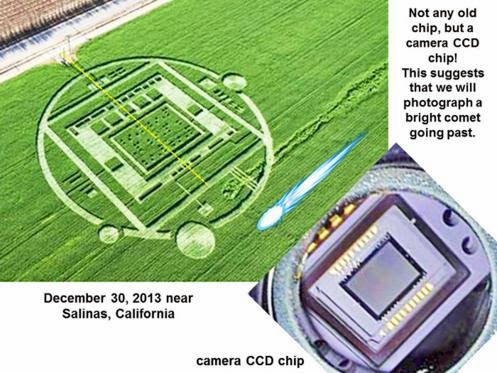 : When studied closely, the "head" of the "comet" shows a "smiley face" (sometimes elaborate Crop Circles), through the "three thin lines", which correspond to three telephone poles or power-ups on the opposite side field of culture: 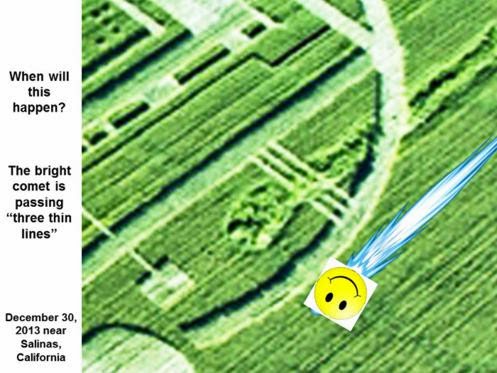 Three "planets" were designed around the outer perimeter, but these are not sufficient to specify a single date: 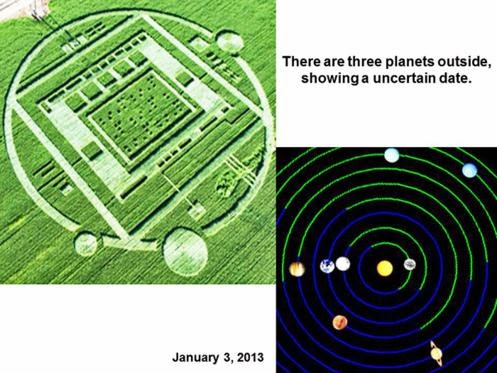 Now three different codes have been carefully incorporated within a cutout image may be of some importance if the image of the crop circle appears to be mold "paranormal", as you may have been clay by human hands?  We need to accurately report these codes in any case.
"  . His first internal code shows a small message in Braille code that says "192-192-2-192-1-192-192".
This can be a symbolic reference to the British search engine "192.com" (see http://www.192.com).
The implication may be that "the blind see, and those who seek will find" 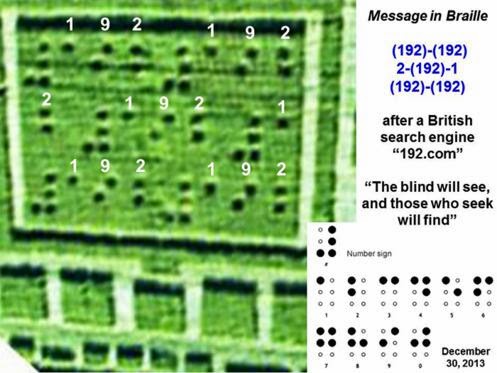 . Your second code, the exterior, involves three phone lines or electricity poles, which appear in the vicinity of the formation of Manton Drove on June 2, 2012.
These three tall poles correspond to the "three thin lines" across the image of the crop circle.
In a nutshell these three tall poles are different numbers drawn in Crop Circle and can be in Morse code, which translates as "3-3-space-space-1" goes clockwise around the image of the icon of the peculiar form of a 'Polar watch include ": 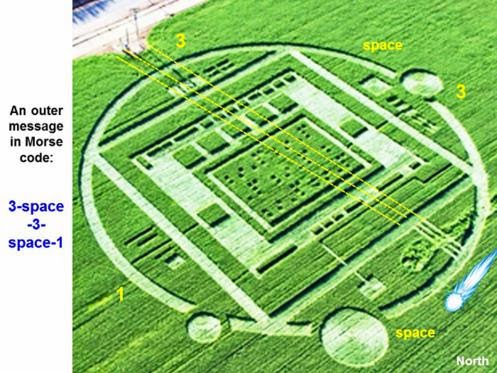 . The third intermediate code has a number of alphabetic characters in Morse code.
They seem to read: "The ET B-SON STS" 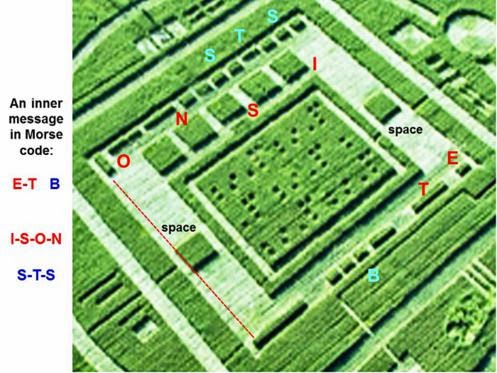 One interpretation of this cryptic message can be:
"ET B (s)" or "ET exist."
So "ISON (comet)" is a "STS (Space Transportation System)" as for the NASA space shuttles (see http://en.wikipedia.org/wiki/STS-1 ).
I would highly wait to see what might happen next.
A second interpretation of its Braille "1-9-2" code in terms of "hours" that goes inside the crop circle seen as "polar clock"
Firstly, I noticed several television services giornalistic (see www.youtube.com ), the three numbers in Braille "1-9-2" code can also mean "hours" throughout the project of a "polar clock" : 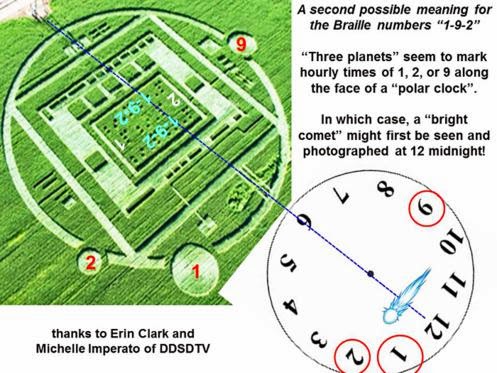 . The purpose of coding in such numbers codex "Braille" and "Planet" parts of one cut image, it would suggest that some important astronomical event (such as a "bright comet") in the first place can be seen 24 hours, then the midnight in Earth's sky, in a specific place (in London?) and some special date.
Within its "CCD chip," we see two separate numbers Braille 2:01 are (2 + 1) = 3.
We can also see three numbers in Braille that are connected 1-9-2 (1 + 9 + 2) = 12.
A time of 12 hours or midnight was then brought up in two different ways.
The general framework of the pictogram, suggests to us that we need to review the "polar clock" three times.  To see three tall poles in the next field, matched by three thin lines on the opposite side image crop circle from these poles.
Several numbers in Morse code as seen around the outside of the watch shows the symbols "3" or "1".
Part of Morse code ("ET B") also shows a fair resemblance to a series of five planetary bodies, or four planets plus the Sun in early January 2014, a sixth body, perhaps the remains of comet Ison over your Final orbital path: 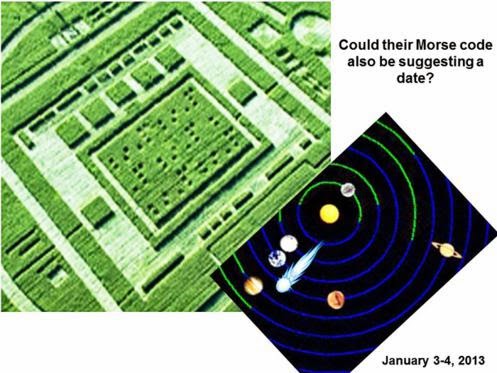 So we can see Mercury, the Sun, Venus, the Earth, the comet debris Ison (ISON = STS), and Jupiter aligned on a heliocentric view in the first part of January 2014.  Who did this and why?  Nobody knows, just have to look at what comes next.
These three lines of telephone poles reach successively higher heights (low, medium, high), as we move clockwise around the image of the crop circle. Novamente, isso sugere que deveríamos voltar para o "relógio polar"
Again, this suggests that we should return to the "polar clock" for three full turns (days, weeks, months?) So there will be the "time of an event" will occur.
The whole image of the harvest was aligned within the field, so that the image of his long "comet" comes from the west and crosses three thin lines in the north.
The Comet Ison was expected to approach near the north pole of the Earth until January 16, 2014.
Many different images of the comet Ison were extracted several crop circle in England, Italy, France or the Netherlands since 2008.
Fonte Source
Posted by Ricardo Roehe at 24:33

A Crop Circle that appeared 11 miles southeast of Salinas, California on December 28, 2013 contains three coded messages according to renowned Crop Circle researcher, Dr Horace Drew. According to Dr Drew, a retired molecular biologist who worked at Caltech and Australia’s CSIRO, one of the coded messages was to be vigilant about an upcoming astronomical event. The next message referred to a date in the near future when an astronomical event is to occur by July 8, 2014. The third and most startling message was that comet ISON was a space transportation system. Taken in their entirety, the three messages appear to be encouraging people to watch the skies for an upcoming astronomical event featuring remnants of ISON that will in fact be an extraterrestrial event of some kind. If genuine and correctly interpreted, the Salinas crop circle is a vindication for those claiming that Comet ISON was no comet at all, but one or more objects under intelligent extraterrestrial control with a specific mission for the inner solar system and Earth. http://www.examiner.com/article/crop-circle-reveals-comet-ison-was-spacecraft-july-8-2014-et-event?CID=examiner_alerts_article