Clearing of the Chimera group continues. Not much can be said about that now publicly.
On the other hand, clearing of their Draco and Reptilian minions is now quite intense and has already reached the awareness of the mainstream population:
http://sputniknews.com/politics/20151018/1028720468/end-new-world-order-russia-shifts-balance-power.html
http://www.veteranstoday.com/2015/10/14/putins-wild-card-in-syria/
Here it is important to understand that Khazarians are actually Dracos who came to planet Earth in late Atlantean period through the Caucasus portal and kept reincarnating into human bodies. Caucasus portal was also the main entry point for the Reptilian warrior slave caste who came to planet Earth in human bodies in Atlantean period and later during Neolithic period through the Kurgan invasion: 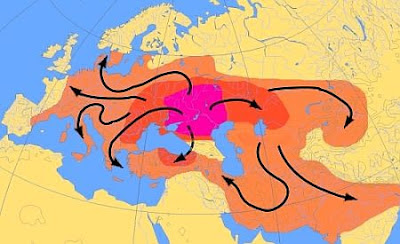 And in the 4th century during the Khazar invasion: 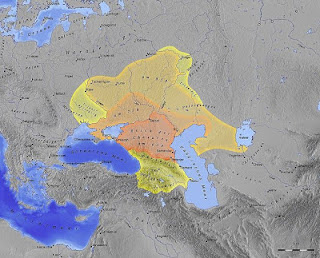 Pleiadians and allied races were always supporting the Earth population in their fight for freedom against Chimera/Draco/Reptilian suppression. Slavic people, especially Russians, were usually quite open to Pleiadian guidance and support.
Kievan Rus, under the military command of Sviatoslav I of Kiev, have destroyed the Khazarian state around the year 965:
https://en.wikipedia.org/wiki/Sviatoslav_I_of_Kiev
That was the beginning of the long animosity between the Khazarians and Russians. Since then, Khazarians were without their original homeland and have lost control of the Caucasus portal.
Pleiadians and allied races are now backing up Putin in his mission to clear Syria of the Islamic state mercenaries. Those beings actually belong to the Reptilian warrior caste which came to planet Earth thousands of years ago through the Caucasus portal and kept reincarnating in human bodies:
http://exopolitics.org/is-russia-using-weapons-developed-with-extraterrestrial-help-in-syrian-civil-war/
Many Pleiadian hostages have been rescued lately from Syria by Russian Spetsnaz agents, with those agents thinking they are just rescuing human prisoners of war from Syrian prisons. Top intelligence personnel within GRU is aware of the extraterrestrial element of the Syrian situation.
The Chimera wants to retake the Caucasus portal and this is the occult reason for the involvement of the Chechen forces in the Syrian situation:
http://www.veteranstoday.com/2015/10/16/direct-intelligence-from-syria-and-lebanon/ 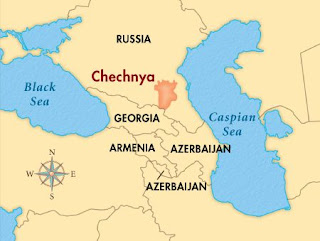 Let me just say that Grozny (translation: the Terrible), the capital of Chechnya, is a major negative vortex in the energy grid of the planet that needs a lot of healing and is connected to Odessa in Ukraine, another negative vortex, a stronghold of the Khazarians:
http://one-evil.org/content/entities_locations_odessa.html
The situation in Syria is the geopolitical turning point for the planetary liberation. Iranian military is proudly showing their underground military bases:
https://www.rt.com/news/318702-iran-video-missiles-secret/
While on the opposite side, Saudi Khazarians are on the run:
http://awdnews.com/top-news/the-mystery-of-fleeing-saudi-princes-and-their-immense-oil-wealth-smuggled-into-europe
Far away from the attention of the mainstream media, masses in Europe are beginning to rise in their fight for freedom.
Nearly 2 million people for independent Catalonia:
https://www.rt.com/news/315070-catalan-independence-rally-barcelona/
A quarter million against TPP in Germany:
http://www.zerohedge.com/news/2015-10-10/biggest-protest-country-has-seen-years-quarter-million-germans-protest-obama-free-tr
Hundred thousand against austerity in Belgium:
http://journalstar.com/business/belgian-government-faces-big-protests-over-austerity/article_c7a383cf-8826-5be4-9ef9-1d06a4186ef6.html
On the financial front, the Eastern Alliance has released CIPS, an international payment system that is an alternative to SWIFT:
http://tass.ru/en/economy/827143
http://sputniknews.com/business/20151008/1028228289.html
And USA has been forced to approve the inclusion of the Chinese Yuan into the SDR basket of currencies:
http://geopolitics.co/2015/09/27/us-approves-yuan-sdr-inclusion-after-china-orders-300-boeing-planes/
There are already positive cracks in the current financial slavery system:
http://www.trueactivist.com/this-is-what-happened-when-sweden-adopted-a-6-hour-workday/
As the Galactic Wars are drawing to a close with the final and definite victory of the Light forces on the horizon, soft disclosure is suddenly not so soft anymore:
http://news.discovery.com/space/alien-life-exoplanets/has-kepler-discovered-an-alien-megastructure-151014.htm 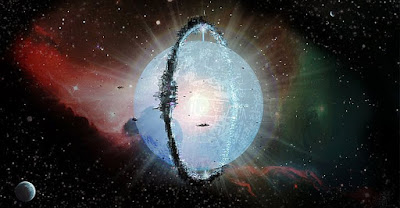 As the final victory nears, some people might wish to try to escape:
http://www.theguardian.com/commentisfree/2015/sep/16/mega-rich-rocket-ships-escape-earth
They will have nowhere to go.
Victory of the Light!