This page is a gathering point for my previous writings on a variety of subjects, and it will be a continuous work in progress. It is here where I’ll collect my past writings, group them by subject, and eventually strip out obsolete references to dangerous dates and combine the writings into concise overviews on each subject. If you are a longtime reader who has gone through the entire blog, you’ll find nothing new here. But if you a new reader or you haven’t read everything from the past, you may find things of interest. These are the subjects currently covered:
Globalist Disinformation, the Higgins Memo, Michael Flynn and “Q-Anon”
The Fake EMP Threat, Bitcoin, and the Great Encryption Lie
The Globalists’ Prophecy Fulfillment Plan
A false-flag blamed on Iran & Khamenei’s complicity in the globalist prophecy deception
North Korean Anthrax
A preliminary “alien intervention” in a ballistic missile launch
A provocation scenario for a North Korean satellite launch
Putin and Trump, the Lubavitcher Messiahs
UFOs and Fake Aliens
North Korean Submarines and Nuclear 9/11
The Left Hand Path and the Right Hand Path
The North Korean Oil Embargo and the New Pearl Harbor Attack
The Three Sandboxes of World War 3
Vladimir Putin, the Jewish King of Restored Khazaria
This is Version 1.01, which contains still-relevant information I’ve harvested from Globalist Agenda Watch 2017: Update 17 as well as additional information on “UFO and Fake Aliens” from Globalist Agenda Watch 2018. I am still in the process of doing a rough edit on these sections, and it should be complete by 8 April 2018. Pardon any imperfections till then.

SUBJECT: Globalist Disinformation, the Higgins Memo, Michael Flynn and “Q-Anon”
You may have noticed this article on Zero Hedge back when it came out…

As you look at the graphic, note how they took care to mention that the President’s National Security Advisor, H.R. McMaster – a supposed “Deep State” operative – is behind the move. They did this because the globalist plan is to portray Trump as playing rope-a-dope with the “Neocon-Neolib-Zionist Deep State” (NNZDS). According to the script, he gives them…
access to top posts in his administration,
lip service to their “evil agenda” with announcements such as the one discussed in the article, and
concessions such as the militarily meaningless April, 2017 cruise missile strike on Syria, to which he gave the Russians forewarning.
“So while Donald Trump is pretending to work with the NNZDS, he is actually working with the ‘Progressive Deep State’ to systematically bring down the NNZDS.” At least that’s what the globalists want you to believe. The truth, however, is that the supposed struggle between the two “Deep States” is nothing more than a white hat / black hat drama put on for public consumption. It is pabulum for children.
Speaking of pabulum, a reader sent me this…
“Do you know about Q?
Apparently there’s someone, calling themselves Q, very close to POTUS Donald Trump who, for almost two months now, has been dropping hints [they call them ‘breadcrumbs’] about the supposed NWO/Globalist elite of the west on imageboard websites like 4chan and 8ch. It is implied that DJT is fighting them trying to free the world from their clutches.
Here’s what I’ve gathered from Q’s revelations –
There is a war going on between CIA and NSA [+ Military Intelligence].
CIA is the elite’s errand-boys. NSA+MI are patriots and fully supporting DJT in his mission to get the world rid of the old elite. [i, personally call them OWO – Trump+Putin will usher in NWO.]
N. Korea is apparently a disneyland for the elite [rothschild, soros, sauds], run by the CIA, used for practicing everything from mind control to pedophilia to literal cannibalism.
KJU, the glorious leader, is the western elite’s puppet. So are the major political families of the western world like the Clinton’s and the Bushes and others, alng with almost all business and media personalities.
Q wants us to explain the on-goings of the world, and DJT’s mission, to the people of the world using simple memes so that when it all becomes apparent, people aren’t shocked.
I just wanted your opinion on Q.”
Online revelations such as this “Q” information are being fed to the awakening public by globalist disinformation agents to foster belief in the globalist con. Supposed “insiders” like “Q” drop narratives like this into the alt-media sphere, which in turn get parroted by alt-media figures who either work for the globalists or are duped by their phony narrative. They are promoting this silly good guys versus bad guys fairy tale to get you to believe that the multilateral / multipolar NWO is “change you can believe in,” but it’s actually the NWO the globalists have been planning all along.
On another note, look at the word “unipolar” in the Zero Hedge article’s title, then read Understanding the NWO Strategy (if you haven’t already). It will help you see through their deception quite clearly.
While we’re on the subject of globalist disinfo dumps, a notable one took place in relation to H.R. McMaster a while ago…

…from Foreign Policy magazine
Here’s an excerpt…
“The seven-page document, which eventually landed on the president’s desk, precipitated a crisis that led to the departure of several high-level NSC officials tied to former National Security Advisor Michael Flynn. The author of the memo, Rich Higgins, who was in the strategic planning office at the NSC, was among those recently pushed out…
The memo is part of a broader political struggle inside the White House between current National Security Advisor H.R. McMaster and alt-right operatives with a nationalist worldview who believe the Army general and his crew are subverting the president’s agenda.
Though not called out by name, McMaster was among those described in the document as working against Trump, according to a source with firsthand knowledge of the memo and the events. Higgins, the author, is widely regarded as a Flynn loyalist who dislikes McMaster and his team.”
Higgins’ memo, which is pure NWO disinformation almost certainly written by a think tank like the London Center for Policy Research, is posted in full within the FP article. And this supposed dustup between the “Neocon-Neolib-Zionist Deep State” represented by McMaster and the “Progressive Deep State” represented by Flynn and Higgins was pure puppet theater put on to give a semblance of reality to the Trump versus “Deep State” con.
The absurdity of the supposed conflict is illustrated by the intimate ties Flynn has with the Jewish Neocons through the London Center…

…from the Internet Archive
The fact that Flynn, the supposed “Progressive Deep State good guy,” is actually a neocon doesn’t fit the globalist script, so they tried to cover it up by removing his picture from the London Center website shortly after I pointed it out in Alex Jones, the Kabbalist banksters, and the “Deep State” con. They even managed to remove his picture (but not his name and title) from the Internet Archive.
And speaking of the London Center and globalist disinfo dumps, have a look at this…

…from Newsweek
In this graphic, you see Michael Flynn with another globalist disinfo agent named Anthony Shaffer. Shaffer is presenting Flynn with a “leadership award” from the neocon London Center. And if you take a quick look into their backgrounds, you’ll see that both are former Pentagon intelligence agents…

…from Google searches for Michael Flynn and Anthony Shaffer
So it is no surprise that they’ve been employed by the globalists to do what spooks do best: feed the public with misleading information. Shaffer does this through frequent disinfo drops on The Alex Jones Show…

…from Google
So in Shaffer’s appearances with Jones, you see a very clear example of what I talked about earlier in this entry: “supposed ‘insiders’ like ‘Q’ drop narratives like this into the alt-media sphere, which in turn get parroted by alt-media figures who either work for the globalists or are duped by their phony narrative.” In this particular case, Shaffer’s disinfo drops are parroted by Jones, who definitely works for the globalists. Shaffer brings fresh piles of steaming, putrid globalist bullsh*t straight from the anus of the London Center, then Alex offers it up to his audience and “sells the sizzle.” Bon appetit.
Speaking of globalist BS…

…from Infowars. Here is an excerpt…
“Former FBI Assistant Director James Kallstrom told Fox Business that patriots within the FBI are about to go public with huge new revelations that could sink the credibility of the ‘Russian collusion’ investigation…
He added that the goal from the outset was to ‘destroy the presidency of the United States,’ a claim backed up by the revelation that top anti-Trump FBI agents had settled on an ‘insurance policy,’ namely the ‘Russian collusion’ investigation, to topple Trump if he defeated Hillary.”
It was nice of Infowars to post such a timely article while we’re on the subject of the staged theatrical conflict between the “Neocon-Neolib-Zionist Deep State ” dark hats and the “Patriot-Constitutionist Deep State” white hats. The article’s reference to “patriots within the FBI” fits right in to the white hat narrative, and the “destroy the presidency of the United States” quote sounds like something right out of the Rich Higgins memo.
According to the article’s subtitle, “something is about to happen” to fatally expose the dark hats, and when it does, the dark hats are scripted to make a final, desperate attempt to save themselves by starting World War 3, killing Trump, and putting Pence into the presidency. The “Deep State” false-flag attack(s) that start the war could happen in any of the three sandboxes the globalists have prepared…
in Asia, with North Korea being blamed;
in the Middle East, with Iran being blamed; and/or
in Ukraine, with Russia being blamed.
As for which way the globalists will take it from there, there’s no way of knowing. We could see the “Trump Triumphant” scenario in which the white hats save Trump and prevent the war OR the “Vindex Falls” scenario in which Trump is “killed” and the white hats step in later to stop a full-on nuclear exchange. We’ll just have to wait and see how hard and fast the globalists want to push. Time is not on their side. 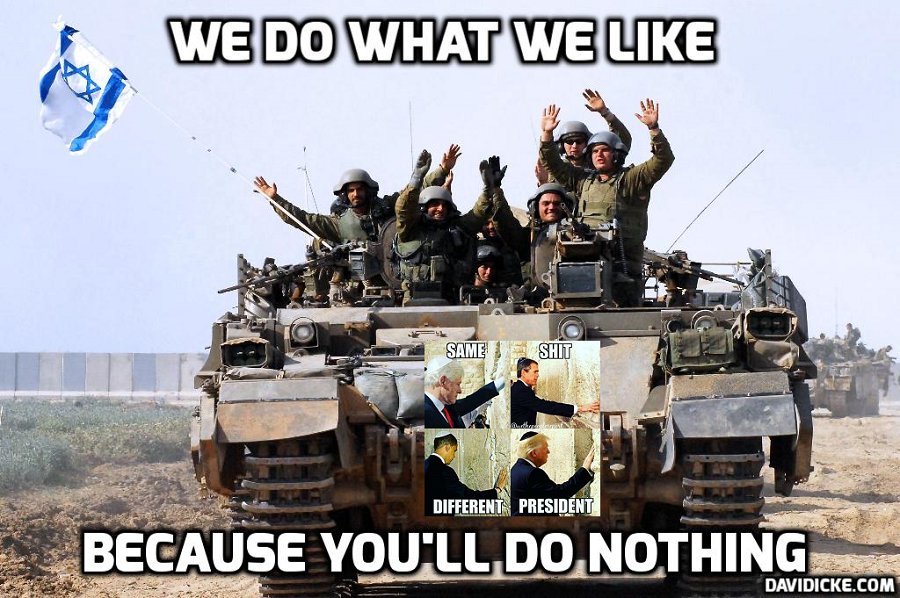 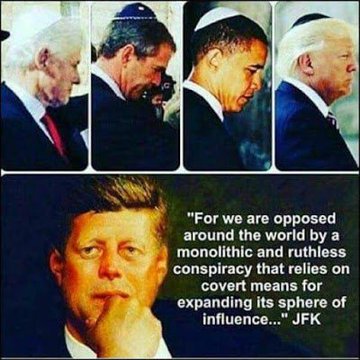 Online revelations such as this “Q” information are being fed to the awakening public by globalist disinformation agents to foster belief in the globalist con. Supposed “insiders” like “Q” drop narratives like this into the alt-media sphere, which in turn get parroted by alt-media figures who either work for the globalists or are duped by their phony narrative. They are promoting this silly good guys versus bad guys fairy tale to get you to believe that the multilateral / multipolar NWO is “change you can believe in,” but it’s actually the NWO the globalists have been planning all along.