Will the FOL arrive too late?

There are concentration camps in the US and Canada already being built to keep people in, gas chambers and crematoriums. They even have millions of plastic coffins piled up onto each other, called FEMA coffins for people like you and me.


I know the FOL doesn't want us to think they are our saviors... but by the look of how bad things will turn once the economy crashes and the government nationalizes everything, even our lives, we'll be stuck in a much tougher situation than between a rock and a hard place.

Chemtrails are still being sprayed into our skies, I see some right now.

My body is still full of Morgellon fibers.

The economy's crashing... what better opportunity than this to close up all the grocery stores and have people starve to death? It's already started in California:


Then, after that, let's pass Martial Law, round up everyone in the wee hours of the morning and bring them to camps where they will never come out of.

Of course, most people that becomes aware of the NWO and its most evil plans -- see there is no hope. The actual only hope we have to get out of this is by some extraterrestrial intervention... and even they, are reluctant to interfere.

So... I'm wishing. No, pleading for some intervention because the other alternative is too gruesome and horrific for my mind to even wrap itself around it. Just imagine the Hitler concentration camp but on a more massive scale.

Do I just ACCEPT it? That I will die, huddled and crying in a gas chamber away from my loved ones and knowing they are probably already dead? Who knows if we will be tortured? No, that's just not happening.

FEDERATION OF LIGHT, YOU BETTER GET YOUR ASSES OVER HERE PRONTO AND INTERFERE BEFORE THERE ARE NO HUMANS LEFT ON THIS PLANET TO EVEN HELP ASCEND!

Permalink Reply by Bishop on March 5, 2009 at 11:44am
surly they wouldn't let it come to these horrors, surly they would intervene before the sh*t hits the fan. I can't imagine they would sit ideally by as things go bad to worse. It is dam time they show up and help us, cos our governments don't have our rights in their best interests, so its time we need their help. Common guys, show your selves!!

Permalink Reply by Andy (UK) on March 5, 2009 at 12:14pm
Its already happened, can't be changed, not everyone will die, there will be many survivors, the ones that are taken underground will eventually evolve over thousands of years onto the human species we regard as the greys. The greys are not aliens but humans from the future. 45000 years in our future. They need this to happen so their race can survive, we mean nothing to them, the survivors on the mainlands become the orions, they also need averything to happen to plan. Stop fighting something you can't and won't be allowed to change, live what life you have left to the fullest, the next few years are going to be painful, sad, trying and difficult, stop looking to the skies for answerd you will not receive, ,Namaste.....

Permalink Reply by Nightfable on March 5, 2009 at 12:14pm
@ Nur Ab Sal: How do you expect me to do that? I've already began stocking up on food, seeds, tools, colloidal silver, clean water... I'm keeping myself as informed as I can. But the thing is, when the shit starts hitting the fan and people start being taken from their homes by armed military soldiers -- what can I do then? Run away? Get shot in the back of the head? No.

I don't have my eyes glazed, looking up at the sky -- everything is crystal clear and real. What I'm saying is that, there's nothing, we, as the general of human population can do anymore to change the NWO. They're too high up there, they have control over everything... and most of the global population aren't even aware of the truth.

So, I'm hoping... hoping that we aren't doomed to suffer the fate of worldwide Genocide in this lifetime.

Permalink Reply by Nightfable on March 5, 2009 at 12:32pm
@Andy(UK): Do you have kids, Andy? When you have something as precious as children, thinking of them as dying alongside of strangers screaming out "Mommy!" "Daddy!" is the very last thing you want to happen. If there's any hope for my children -- and that, concerning the FOL coming here to help and stop such events -- then I will keep on hoping.

Permalink Reply by Nightfable on March 5, 2009 at 12:53pm
LOL, I was down when writing this and now it seems I am in the pits of despair.

Can't a gal get some comforting words and hugs around here? :P 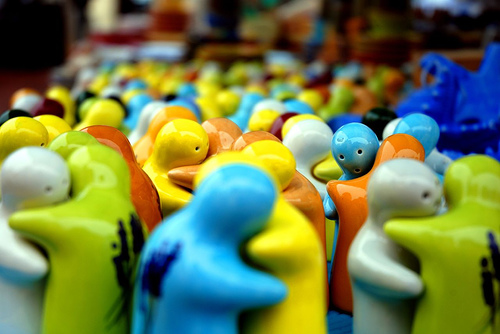 Permalink Reply by Nightfable on March 5, 2009 at 12:59pm
@ Nur Ab Sal: Thank you so much for your kind words, that's exactly what I needed to hear... I am keeping this hope alive, no matter what happens. <3

Permalink Reply by Bishop on March 5, 2009 at 1:30pm
i would just like to say, don't worry about it. if you are worried leave the country to Europe (not the UK tho).
It is said we are on a very positive time line for the future, and this i truly believe. There may be hard ach, and hard lessons for the world to learn, but we will emerge stronger and more loving as a whole than ever before.
The FOL will not allow the darkness of NWO to succeed.

Permalink Reply by Trudy on March 5, 2009 at 1:37pm
Believe in life... believe in yourself
Unity is strength
And pleace my dear Nightfable Do not underestimated the Power of Global Love
Stay free from fear and you will feel how strong you can be...

Permalink Reply by Marie on March 5, 2009 at 1:40pm
Looks like someone is succumbing to fear! So, what will you choose, love or fear? I choose love!
Love and peace,
Marie

Permalink Reply by Nightfable on March 5, 2009 at 1:43pm
As for leaving the country, I'm stuck in Canada on welfare. But, you know, my mood has lightened and I am going to do whatever I can to help manifest a future filled with life, love and laughter.

And if I ever get stuck in a gas chamber, one day along the road, I will try and comfort the people around me to the best of my ability before croaking and hammering my spirit guide with well chosen swear words.

*waves at FOL* Hey, up there! The road is clear, you can show yourselves now!!

Nightfable my dear, don't worry, don't fear, live for love :)
It may not even be necessary, but the safest place to be is high ground. if you move to the mountains and find a small loving community, that will be the safest place.
Above all, do not fear, and do not fear death. This is a great lifetime, but one of many.

Permalink Reply by Andy (UK) on March 5, 2009 at 2:49pm
I have 4 kids and I won't go without a fight, I want the fol to come and be our saviours, but I just don't think they will, be strong, you may be one of the lucky ones, what will be will be, hang in there for your kids and try to ride the storm that is coming. We are definately on the timeline, I read about the stock markets going to crash in 2009 back at the beginning of 2008, look what is happening, its not a coincidence it is a controlled crash, I've also read and heard that something big is about to happen between april and the summer, let's hope it doesn't. I don't like all that is happening, but just feel there is nothing we can do about it, it is out of our hands, I truly hope we change the timeline we are in, but we can't do it alone, they are too powerful to stop, this is depopulation......these are my beliefs, you don't have to read or listen to them, but I feel I need to express them