The secrets hidden in the pyramids of Egypt

Edward Leedskalnin built Coral Castle this way. He was on a aquifer and a water well using metal pipe was used in generating electricity.

The well pipe is on the left, right next to the flywheel. 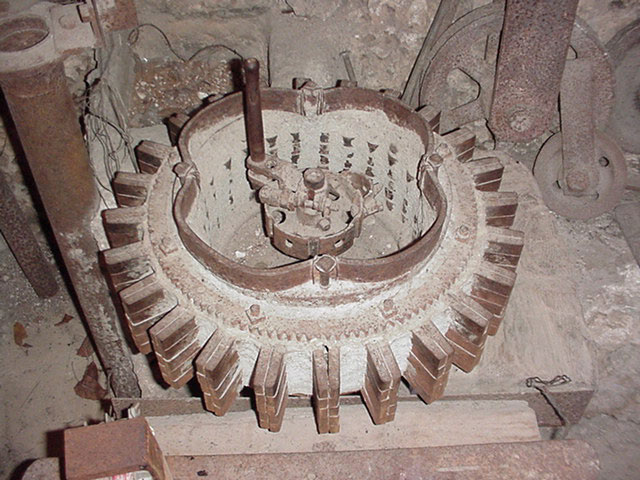 All sacred sites across the world, to our knowledge, are located above underground water- every stone circle, pyramid, temple etc. It is also our contention that our ancestors who built these sites knew this very well and consciously utilised the associated energy. There is a well (now in the 'pool' room of the pub) at the centre of Avebury henge, seismic surveying has recently discovered a previously unknown well near the centre of Stonehenge, and underground water has even been detected in the desert underneath the Great Pyramid. Earth energy currents are also associated with underground water.

When charged particles (ions) from metals such as calcium, magnesium, and iron are dissolved in the underground water, they have the ability to carry an electric current (known as specific conductance). When friction is created by the water (and the ions in the water) traveling through the tiny pore spaces in an aquifer, and depending on the nature and concentration of the metal ions being absorbed, the pore sizes they travel through, and the speed and mass of the water, electrical fields of different force and wavelengths are generated.

Water is a primordial element which underlays creation myths and stories around the world. The Egyptian Heliopolitan creation story recounts that the sun-god Atum (Re) reposed in the primordial ocean (Nun). In Assyro-Babylonian mythology, first the gods and subsequently all beings arose from the fusion of salt water (Tiamat) and sweet water (Apsu). The holy books of the Hindus explain that all the inhabitants of the earth emerged from the primordial sea. At the beginning of the Judeo-Christian story of creation, the spirit of God is described as stirring above the waters, and a few lines later, God creates a firmament in the midst of the waters to divide the waters (Genesis 1:1-6). In the Koran are the words We have created every living thing from water.

Water divinities of various kinds appear in the mythologies of many cultures. And not surprisingly, the world abounds in sacred springs, rivers, and lakes. Even within the Judeo-Christian tradition, which generally avoids the veneration of the various phenomena of Nature, there are numerous examples of sacred springs or wells, and rivers. In most cases, the spring or river has acquired sacredness through connection with a significant or miraculous event. The water of the River Jordan is sacred because Jesus Christ was baptized in it by Saint John the Baptist. The spring at Lourdes is sacred because of its healing properties in connection with the appearance of the Virgin Mary to Bernadette. In some cases, such as the holy well at Chartres, or the Chalice Well at Glastonbury were probably already sacred in pagan times.

While sacred in their own right, sacred springs also draw attention to the sacredness of water itself, reminding the Christian, for example, that water is a symbol of grace (and as such is used for baptism). Water is also one of the four elements possessing fundamental characteristics. In the Canticle of the Sun, St. Francis of Assisi praises God for water: Praised be Thou, O Lord, for sister water, who is very useful, humble, precious, and chaste. In many cultures, water appears as a reflection or an image of the soul. In Japan, water prefigures the purity and pliant simplicity of life. It can be both calm and animated, and the Japanese may contemplate the unruffled surface of a temple pond or make pilgrimages to waterfalls. The lotus-stream of the Buddha or Boddhisattva rises up from the waters of the soul, in the same way the spirit, illumined by knowledge, frees itself from passive existence.

And this observation was not lost on ancient temple-builders. In fact, they embraced it. Every sacred site on Earth either sits above or beside veins or bodies of water. A map of the underground springs, eddies and veins of water below sacred sites such as Stonehenge (above) show how each monument was placed in a certain relationship with the motion of subterannean forces.

Even in places where there are no signs of water this situation exists. The pyramids that sit in the desert of Egypt also lie atop underground rivers; at the Navajo altar in Monument Valley, a vast sandstone desert, a stream of water exudes from a large sand dune for a hundred feet before rejoining the desert. Here sits a Navajo sacred site where ceremonies today are performed beside a mature juniper tree. So why should this precious resource be so integral to the function of sacred space?

The most obvious answer lies in the end-users of temples: humans. Water is the most abundant element in the human body. It covers two-thirds of it. In this way humans are mirrors of the planet, since the Earth is also covered by 2/3rds water. Naturally, if you’re going to create a sacred space designed to work for the human body it makes sense to incorporate its most abundant element.

A telluric current (from Latin tellūs, "earth"), or Earth current,[1] is an electric current which moves underground or through the sea. Telluric currents result from both natural causes and human activity, and the discrete currents interact in a complex pattern. The currents are extremely low frequency and travel over large areas at or near the surface of Earth.