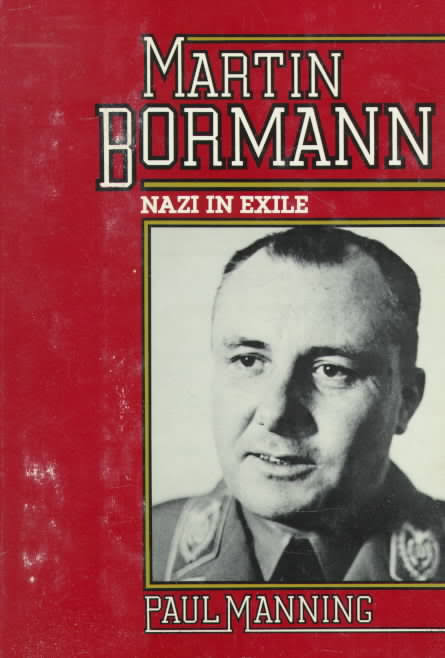 Paul Manning, a distinguished msm journalist, was persecuted
for revealing in 1981 that World War Two was a charade.
With the cooperation of the Allies, Martin Bormann ensured Germany's
postwar economic rebirth  by transferring Nazi wealth abroad .
Both he and Hitler probably survived.
This is more evidence that, at the top,
the Nazis and the Allies were controlled by the same people,
the Illuminati (Sabbatean-Frankist) Jewish bankers.
The purpose of war in general is to kill the non-Masonic Jewish and goy patriots,
degrade & demoralize humanity, and consolidate debt and power in bankers' hands.
Why are people reluctant to believe humanity is in the grip of Satanists?
Modern history was and is hell-on-earth for many millions. This wasn't done by choir boys.
The Sabbatean-Frankist Nazi Empire after WW2 is the title of a must-see video by Dave Emory.
I found this review in the comments. Dave deserves credit for single-handedly keeping this critical story alive.
Naturally they want to suppress it.
(from Sept , 2015)
The Unvarnished Truth
A review of Paul Manning's Martin Bormann: Nazi In Exile" 1981
By John C. Sanders
Anticipating the defeat of the Third Reich, Reichsleiter Martin Bormann set up 750 corporations in neutral countries, primed as vehicles to receive the liquid wealth of Germany in addition to patents and other proprietary industrial information.
An organizational genius and the real power behind Hitler, Bormann, known as the "Brown Eminence", successfully fled Europe for South America and administered a "Reich in Exile" in the years following the war.
With remnants of the SS as an enforcement arm, former Gestapo chief General Heinrich Mueller as security director, the 750 corporations as a base of economic power and the willing silence and cooperation of the Western Allies, Bormann guided his organization to a position of consummate power.
One banker quoted by Manning termed the Bormann Organization, the "world's most important accumulation of money power under one control in history".
Controlling Germany's major corporations, the Federal Republic itself and much of Latin America, the Bormann Organization also maintained a formidable circle of influence in the United States.
Paul Manning has written the definitive text on the Bormann Organization. Manning worked with CBS radio during World War II in London as a member of the elite Edward R. Murrow/Walter Cronkite team and then became a speechwriter for Nelson Rockefeller.
DISCOVERY
Several decades after WWII, Manning stumbled across the U.S. military CSDIC (Combined Services Detailed Interrogation Centers) interviews of members of German industrial and banking magnates in the US National Archives. Aghast at the findings, Manning set out to write a book about the secret machinations of Nazi money laundering.

Unknown to Manning, the manuscript was a stake in the heart of former CIA director Allen Dulles,left,  who represented many German interests on both sides of the Atlantic during the 1930's and 40's through his law firm of Sullivan and Cromwell with offices in New York and Berlin.
Upon the German surrender, Dulles was instrumental in quietly recruiting Hitler's chief intelligence officer General Reinhard Gehlen and many of his key operatives. They were brought to Fort Hunt, Virginia and folded into the American O.S.S. which was converted into the C.I.A. with enactment under Truman of NSC-68 in 1948. Gehlen remained covertly in full U.S. employ until returning to head the German BND in the fifties.
Concerned over public exposure of Manning's investigation, Dulles volunteered to "help" the unsuspecting Manning with his manuscript, and sent him on a carefully orchestrated wild goose chase, searching for Martin Bormann in South America. Without knowing that he had been deliberately sidetracked, Manning wrote a forward to his book personally thanking Allen Dulles for his assurance that "I was on the right track" and "should keep going." In actuality, Dulles' assistance was aimed at sending Manning and his manuscript into obscurity to avoid disclosure of the transfer and protection of Nazi money.
PUBLICATION HISTORY
Through its connections with major American corporations, the Bormann group successfully pressured publisher after publisher to decline Manning's manuscript. Of particular significance in the suppression of Manning's book was the Thyssen family.(patriarch Fritz Thyssen was Hitler's earliest and most prominent backer among German industrialists) His grandson, Count Zichy-Thyssen, who controlled Thyssen Steel from his base in Argentina, let it be known it would be very much appreciated if American publishers "stayed away" from the Manning text.
Manning finally found a home for the book at the maverick publishing house Lyle Stuart. In retaliation, the head of the publishing house had his legs broken the week the book was released and reviews of the book were blocked in major newspaper markets and mainstream publications. In 1993, after another decade of intense research, Manning's son Jerry, was senselessly and inexplicably murdered.
Based on information garnered from his contacts in the intelligence community, Manning concluded the killing was in retaliation for his continued work and intent to publish a follow-up book, "In Search of Martin Bormann". The death of his son devastated Manning and stymied completion of the 2nd book. He died shortly after in 1995.
In December 1998, California-based researcher and broadcaster Dave Emory conducted a live, on-air radio interview ... with Manning's surviving son, Peter, concerning the Bormann flight capital organization and his father's work in bringing its activities to light. Peter movingly recounted the difficulties his family experienced as a result of his father's work on the book.
In addition to surveillance and harassment, the family experienced economic and mental hardship as a result of deliberate efforts by elements hostile to its message. For obvious reasons, copies of this book were assiduously removed from market and have, for some time, been unobtainable.
This landmark work nonetheless remains the unvarnished truth regarding Germany's post-war economic rebirth and lays the groundwork for understanding its current bid for dominance in manufacturing, banking and most importantly, publishing.
"Martin Bormann: Nazi in Exile" is without peer in detail, accuracy and courage in probing the most important and successfully concealed story of the twentieth century. Mandatory reading.   (Pdf)
---------
Related-
----------------Nazi Germany Morphed into Federal Republic
-----------------Nazi Money Financed Germany's Rebirth
-----------------Jews Active in Nazi Financial Empire
------------------Nazi Owned Corporations Control France's Economy
-----------Did Illuminati Jews Help Plan Holocaust?
----------------Bormann Ran Hitler for the Illuminati
---------------- Proof Bormann Was illuminati Agent
------------- Hitler & Bormann Were Traitors
- See more at: https://www.henrymakow.com/#sthash.00qsamsw.dpuf