{Be The Media) – This Russian website shows stunning photos of what appears to be Stonehenge being built. The author provides a detailed information about how the British government/military built this new age cult site and speculates the fact that it may have actually built from scratch or at least remodeled. The author also contends it may be a replica of the original. The pictures are stunning nonetheless.

Below is a rough Google translation of the author’s analysis.

Note: I suggest you save a copy of these photos “just in case” they dsappear or the website gets conveniently shut down. You never know… Stonehenge. Filming 1954-1958 yy
At all times, all governments (and especially outside – and nadpravitelstvennye circles) engaged in forgery. Pictures of 1954 and 1958. The first reaction of some readers who continue to say something about the ” recess “, ” restoration” , ” replacement ” , ” ancient megaliths ,” convinced that without explanation did not do. In the early photos , ranging from the 1st , which is higher than you see white circles denoting the space for future ” megalith ” . This is the ” scope of work ” for builders . Layout object from the customer , made with lime in the wells of the blue , pristine lawn. ” Megaliths ” not pulled out as carrots , leaving no trace of this procedure.

Next, consider if the pictures closely, you will find both military and barbed wire in the area, and other details , saying that at a certain point in the future ” cyclopean building ” ancient Druid atlanto – asura- siriyanto – Aryans was protected sensitive sites . See ” customer representatives ” who are not officials , builders, workers, the surrounding residents. Has “initiated ” with some of my bookmarks and equipment. Stonehenge – ” Space Portal “, ” energy crystals “, etc., etc. played an important role in the presentation associated with the ” apocalyptic “, ” irregular ” and the rest, took care of that when tab . Until the same time the appointment of construction thereof – biological and spiritual contamination. Which is illustrated by modern photographic materials at the end of this post. The author even provides some , as he calls them ” little known facts ” :

1. First near Stonehenge military exercises were held in 1898.
2 . From that time until the Second World War, the Ministry of Defence bought up large tracts of land in the area
3 . Currently, the Ministry of Defence owns 390 square kilometers (!) In the vicinity of Stonehenge , some of which are closed permanently to other access is severely limited . ( By Wikimapia border nearest military base – a mile from these stones to the north, and the military airstrip – 5 kilometers to the south- east).
4 . In the past, in the vicinity of Stonehenge were carried branch railway and airport, both were subsequently removed (there are other sources that the military airfield was much closer , at a distance of one mile from Stonehenge )
5 . In 1943 the village of Imber ( 15 kilometers from Stonehenge ) and village Par Hinton were evicted . In the article about Imber says that to this day the village is under the control of military
6. In 2 kilometers north of Stonehenge located Royal Artillery School , which conducts real shooting 340 (!) Days per year
7. At 9 kilometers south -east , with the military airfield , located Defence Science and Technology Laboratory , whose work is primarily classified.
8. Another 17 kilometers to the west of Stonehenge is a military base and the Air combat helicopter airport ” Apaches “
9. In the area of Stonehenge is not conducted agricultural activities because of the danger of running into a dud , which for centuries has accumulated a lot. Because of this, green meadows around Stonehenge acquired scientific value (Site of Special Scientific Interest) as are the latest natural lawns in England , perhaps – and throughout Europe .

So, to summarize :
- Stonehenge around for over 100 years – closed area , guarded by the military patrolled by military aircraft and helicopters , with daily artelleristskimi firings.
- Local residents evicted during the Second World War, under the pretext of exercises; villages took control of the military, the situation persists to this day.
- Selkohozyaystvennaya activity over large areas of the plains , where the Stonehenge prohibited
- On the territory there was an infrastructure that enables large-scale construction (including airports, railway line ) , which was later abolished as unnecessary

In other words, everything is clear. On the territory protected by the British War Department , consciously and purposefully been erected this ” center of ancient civilization “, ” heritage of the great ancestors ,” ” Monument of Humanity” , which became (not by itself , clearly put ) the most important religious center at least deliberately inculcated ” spirituality ” .

There is no doubt that the most ” heritage of humanity ” and ” spirituality ” , is an important attribute of this means ” heritage ” and ” science ” that unfolded around thereof ” heritage ” colossal scale their “research” one customer .

p.s. So, what in your opinion, is shown in the photo – the restoration or construction of Stonehenge twin ?

Easy to debunk, this photo of Stonehenge was taken in 1877 : I do not want to step on anyones toes, but is that date traceable.. there can only be one way of truth.. at the moment that truth is in the twilightzone ;) my dear friend Patrick ^_^ 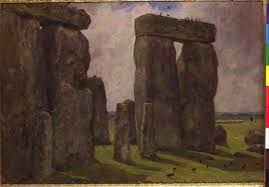 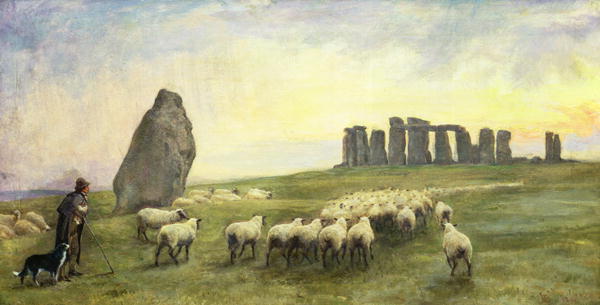 Hi Trudy, I thought some 19th century art should enliven  debate.  I was pleased to see you still here dear Trudy and fellow truth quester, :)