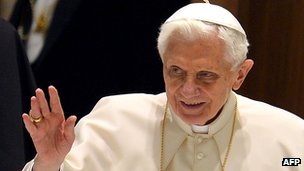 Pope Benedict's announcement has surprised Catholics and the wider world

Pope Benedict XVI is to resign at the end of this month in an unexpected development, saying he is too old to continue at the age of 85.

Resignations from the papacy are not unknown, but this is the first in the modern era, which has been marked by pontiffs dying while in office.

At 78, the former Cardinal Joseph Ratzinger was one of the oldest new popes in history when elected.

The BBC's Alan Johnston in Rome says the news has come "out of the blue", and that there was no speculation whatsoever about the move in recent days.

A Vatican spokesman indicated that even the Pope's closest aides did not know what he was planning to do.

He took the helm as one of the fiercest storms the Catholic Church has faced in decades - the scandal of child sex abuse by priests - was breaking.

The Vatican says it expects the period between the Pope's resignation and the election of his successor to be as brief as possible, but there has been no confirmation on when cardinals will meet to choose a new pontiff.

In a statement, the pontiff said: "After having repeatedly examined my conscience before God, I have come to the certainty that my strengths, due to an advanced age, are no longer suited to an adequate exercise of the Petrine ministry.

"I am well aware that this ministry, due to its essential spiritual nature, must be carried out not only with words and deeds, but no less with prayer and suffering.

"However, in today's world, subject to so many rapid changes and shaken by questions of deep relevance for the life of faith, in order to govern the bark of Saint Peter and proclaim the Gospel, both strength of mind and body are necessary, strength which in the last few months, has deteriorated in me to the extent that I have had to recognise my incapacity to adequately fulfil the ministry entrusted to me.

"For this reason, and well aware of the seriousness of this act, with full freedom I declare that I renounce the ministry of Bishop of Rome, Successor of Saint Peter, entrusted to me by the Cardinals on 19 April 2005, in such a way, that as from 28 February 2013, at 20:00 hours, the See of Rome, the See of Saint Peter, will be vacant and a Conclave to elect the new Supreme Pontiff will have to be convoked by those whose competence it is."

A sign from above? Lightning strikes Vatican hours after Pope's shock resignation

The lightning touched the roof of St. Peter's Basilica, one of the holiest Catholic churches, hours after Benedict XVI's shock announcement

Alex Gibney explores the charged issue of paedophilia in the Catholic Church, following a trail from the first known protest against clerical sexual abuse in the United States and all the way to the Vatican.

Watch this and you will not be surprised that Pope Benedict XVI has become the first Pope to resign in 600 years.

Nazi Youth member Joseph Ratzinger was appointed in 1981 to head the Congregation for the Doctrine of the Faith (CDF), formerly the Supreme Sacred Congregation of the Roman and Universal Inquisition - the mass murdering and torturing 'Holy Inquisition' - by the wrongly rose-painted Pope John Paul II.

The same Pope decreed in 2001 that all child abuse cases worldwide involving the Catholic clergy should be dealt with directly by Ratzinger at the CDF with the role, carried out with vigour, of stopping the Church-destroying truth coming to public attention and, in doing so, denying justice to abused children and allowing paedophile priests and bishops to stay in their jobs and continue their abuse of other children.

Ratzinger has resigned because of ill health? His mate John Paul II continued in his last four years despite suffering from Parkinson's disease, severe arthritis and having difficulty speaking and hearing. Popes don't resign and this is why it hasn't happened for 600 years. This is really about the truth coming out and there is a tidal wave of that still to do so - especially in Ratzinger's case.

I have said it for two decades and I will go on saying it - paedophilia and Satanism are the cement that hold the global Establishment together and the Roman Church is founded upon both going back to its theological 'inspiration' in Babylon and beyond.

hahahahahaha yes we've bean through it all ;-)

Obama: 'On behalf of Americans everywhere, Michelle and I wish to extend our appreciation and prayers to His Holiness Pope Benedict XVI [who systematically covered up Catholic child abuse in America].'

Cameron: 'I send my best wishes to Pope Benedict. He has worked tirelessly to strengthen Britain’s relations with the Holy See. His visit to Britain in 2010 is remembered with great respect and affection. He will be missed as a spiritual leader to millions.'

Chief Rabbi Lord Sacks: '... a man of gentleness [sic], of quiet and of calm ... who carried with him an aura of grace and wisdom.'

Pope Benedict Steps down fulfilling The Malachy Prophecy, Will Armageddon Follow As Predicted?

Pope Benedict XVI announced Monday morning that he would be stepping down as the head of the Catholic Church, making him the first Pope to step down rather than die in the position in more than 600 years. A new pope will be selected by the end of March. There will undoubtedly be much speculation about who will take over the reigns of the Catholic Church, but one thing that we can look to for some guidance about who might be the the next pope are the infamous papal prophecies of St. Malachy. St. Malachy, the first Irish saint, had a vision of the next 112 popes. We've had 111 since, and are on the verge of seeing No. 112, which Malachy says will be the final pope before the end of the world as we know it.

St. Malachy had written about the 112th pope:

"In the final persecution of the Holy Roman Church there will reign Peter the Roman, who will feed his flock amid many tribulations, after which the seven-hilled city will be destroyed and the dreadful Judge will judge the people. The End."

St. Malachy prophesized that the final pope would be "Peter the Roman", which is interesting because no pope to date has chosen the name of Peter out of respect for Peter the Apostle. There has also been speculation that the final pope would be black. Even more curiously, there is a black cardinal in Ghana, Peter Turkson, who is believed to be a frontrunner and whose name has come up in previous discussions of papal appointment.

Malachy's prophecies are taken very seriously as they've been uncannily accurate to date. Will the Catholic Church get its first black pope? Will "Peter the Roman" lead us into the End Times? These questions are set to be answered by Easter, which comes this year at the end of March, when the papal conclave announces their decision.
Read More on http://www.clevelandleader.com/node/20116

Pius XII 1939-1958 - Pastor Angelicus (the 1st of the Angelic Shepherds). In 1945, Pope Pius XII stated, "The world is on the verge of a frightful abyss ... Men must prepare themselves for suffering such as mankind has never seen."

John Paul I 1978 - De Medietate Lunae (Of the half moon) (born Albino Luciani, in Canale d’Ogardo, diocese of Belluno, (aka lovely moon) (John Paul I reigned for 34 days from half a moon to the next half... before he died suddenly and mysteriously.)

111th Pope? “De Gloria Olivae” From the Glory of the Olive (The Assassinated Pope-elect?)

"During the last persecution of the Holy Roman Church, there will sit upon the throne, Peter the Roman, who will feed the sheep amid great tribulations, and when these are passed, the City of the Seven Hills (Rome) will be utterly destroyed, and the awful Judge will then judge the people" - St. Malachy

Nobody would doubt we live in very serious times. The shadow of world war three looms over the world. Destruction and greed are everywhere. The four horseman lay waste to the earth. Israel is ever so close to occupying all of Jerusalem so they can build their third temple. I'm not a believer but I still take things like this seriously just because I would be ignorant not to. -Mort

Prophecy of the Popes : Petrus Romanus the False Prophet

POSTED ON February 11, 2013 BY Stewart (on FB)
THE POPE IS POOPED!
Supposedly it has been over 600 years since a pope called in sick to work! Poor Ratzinger just could not handle the riggers of so many rituals, Satanic invocations, good red wines and bloods or the rich meats of untouched virgins. Poor thing. Perhaps his days in the Nazi Youth Movement killing innocent people and shooting down American planes has taken a toll on the poor dear.

No matter, I am sure that the Illuminati have a plan! They are never short of those. Remember, Nostradamus predicted that there would be just one more pope after this one. I have stated that due to events in the Kuiper Belt, the process has been sped up. The Illuminazis are afraid, perhaps. So, time to speed up the “prophecies” which were written by them anyways.

There is a rumor that the so-called “Black Pope” will be taking the place of Ratzinger. That was the plan for the final pope all along. This last pope will usher in the New World Order, New World Religion and officiate over the arrival and acceptance of our alien “brothers in Christ”. By the way, my contact in the Vatican claims that there is no vote for new pope. There never has been. It is all arranged before the convocation ever begins. It is a show for the public–no surprise to most of you, I am sure.

This removal of the current pope is significant. It means the NWO agenda is now in full motion. We will see events happening globally now every week of major significance, which will include “discoveries” being revealed, space objects sighted, new creatures found, historical artifacts mysteriously uncovered and so on.

Rumor has it that my name is floating around as possible new pope. Should I accept?? LOL! The wolf in the henhouse! Or, lion in the rectory.

This move indicates the end of modern Christianity as it has been known. The new pope will be even more evil than this one. Keep an eye on who is chosen. He will do strange things and make odd statements. As luck will have it, I will be in Italy in March and will have first hand info from the Vatican insider.