We knew there would be more false flag events before the fall of the tyrants.

I was wondering how they would spin this to take away the sencond amendment right to bear arms. Then right after they show a senator calling for gun control to stop the violence saying little kids were injured.

Now correct me if I am wrong what does a bomb have to do with guns? Watch next they will tie patriots into the bombing so we have to disarm all the patriots. It never ends.

Will they resurrect Obama or Sadam?

How about Korea or Iran?

How will they tie this in to meet their agenda?

Watch and see. This is looking like a very bad B movie.

Sad these events happen, my condolences to the injured

but they will never stop until we find the real cause.

It wasn’t the JFK library. It was the Boston Public Library. 600 block Boylston Street.Across the street from the real bomb.

Uploaded on Apr 19, 2013
It wasn't the JFK library. It was the Boston Public Library. 600 block Boylston Street.Across the street from the real bomb. http://www.naturalnews.com/images/Boston-Globe-Twitter-April-15-201...
http://www.infowars.com/boston-marathon-bombing-happened-on-same-da...
http://www.globalresearch.ca/official-story-unraveling-for-boston-m...

this link isn't available for my country :(

where is the picture of the woman with missing leg from? when I try to get URL or copy the image, it doesn't work. Do you have the link to a website where it originated from?

Can't find that lady in any of the boston victim photos on google.  Where's the link? 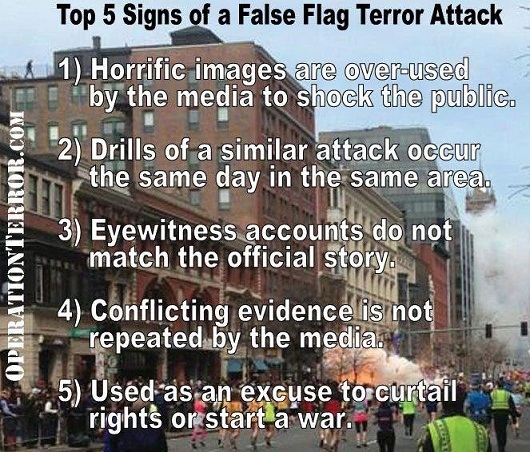 Beware of the drills
{http://libertyfederation.com/blog/martial-law-alert-%E2%80%93-abc-r...

"I came back to America last week to grab my hard drives, all my stuff, and to get rid of my place in Boston ---- only to be greeted with a reminder of how much I hated all the bullshit lies and corruption spoiling this once-great country. You know, my bestfriend worked one block from the bombing. Usually during the Marathon races, all businesses and offices are closed due to heavy heavy traffic. But on that day, my bestfriend had to go into his office for a meeting. At around five-ish that day, I had just woken up...when he came through the door in a state of shock. He couldn't talk. I didn't even know what had happened because I slept through it all. I still have jet lag.

Then the next day, we weren't allowed out at all...not even to get some coffee. Men dressed in black gear paraded through the streets with weapons. In Watertown, they were confiscating guns from residents. This they don't tell you on the news. I understand that perhaps the "suspect" may be tempted to fish for weapons, but what about the people that may need to protect themselves from the "suspect" or the government? I'm going back to India. I got what I need, saw what had to be seen, and I recommend that you all consider doing the same. Welcome to the United States of Israel. Not only did a bill pass to spy on you (on the same day of the bombing), but now there will be more eyes in the skies, a stronger push for confiscating guns, and no miranda rights to be read to anybody. I'm not a conspiracy theorist, but one who studies multiple theories to get to the truth. A country that has no conscience when attacking the innocent ANYWHERE, obviously sees no value in human life. Hence, it also sees no problem attacking its own innocent citizens." -- Suzy Kassem

via: Hands OFF Syria

nah nah Maia Makalii every pic is coming from FB, so take it or leave it, there are pics of Spielberg being present on the staged event of Boston, who can tell me they are real.. it isn't of any importance, there is good info and there is desinfo.. is this pic of this woman with no leg a pic of desinfo could be I don't know, some say it is real some say it isn't real..  but what is real is that it is a staged event!
Maia Makalii said: