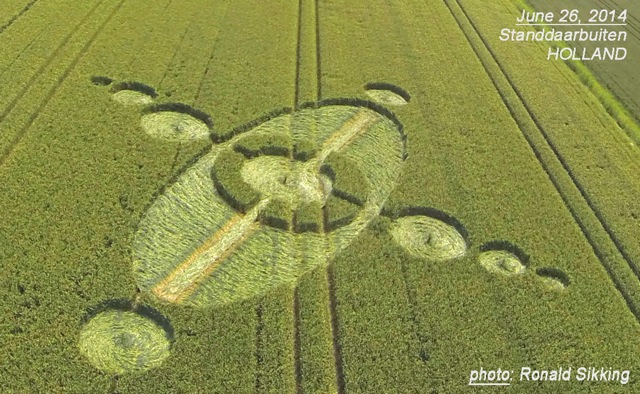 All this past week Robbert van den Broeke felt something very big was coming, but because he has recently been doing several lectures and “healings” in his area he hadn’t had time to focus on this intuition.  On the evening of June 25th he had a night off and his friend Roy was visiting, and Robbert told him about his feelings.  An hour or so later Robbert felt a very strong, very “big  presence” around him and knew something extraordinary was getting ready to happen.   Suddenly he had a “vision” and saw first a flash of light over a field in Standdaarbuiten and then an image of what the new crop circle would look like—and because I (Nancy) always ask him to make a drawing quickly before going out to the fields (if he has a feeling about what the new circle will look like)  he grabbed some paper and drew a kind of “eye” with a cross going through it.  Above and below the “eye” he added some circles on both sides, and then added the date & time as I’ve requested. Immediately after completing the sketch he and Roy got in the car and headed toward Standdaarbuiten and, as they drove, Robbert remembered the field where the huge triangle had appeared last summer—and knew this was where they were to drive.   It was very dark when they reached the right place and the formation was not visible from the road, so Robbert let the “energies” lead him, and they took the 2nd tram-line into the field.  After a few meters they could both see something ahead in the darkness and shortly found the huge (especially by Dutch cc standards) formation.

Robbert told me tonight that he thinks this formation has appeared as a deliberate preparation of its visitors for something “bigger” which he feels is coming.  If he gets any other “message” from this circle he will ask his helpers to post that information on his website in the crop circle archive:  http://www.robbertvandenbroeke.nl/graancirkelarchief.