Zionism is the Curse of Jewry

Henry Klein: Zionism is the Curse of Jewry 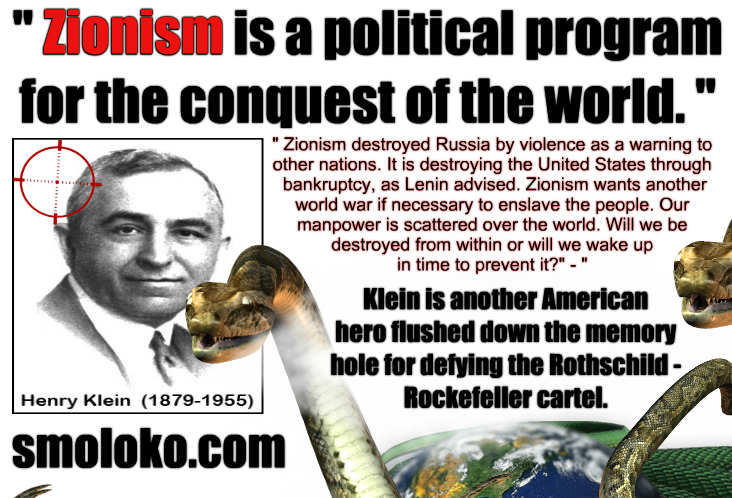 Henry Klein (1879-1955) represented the majority of Jews who just
wanted to assimilate. However, as he explained in this 1945 essay, the
bankers needed to use them to achieve Masonic Jewish world government tyranny.
As result, Jews have been finagled into advancing "globalism" and no doubt they and not Freemasons will be blamed for it.
Klein overestimated the ability of the Arab world to resist the
Zionist incursion.. But he was right that Israel represented aggression and endless war.
Most Jews are unaware they are being used in a diabolical plot. They are more effective as "useful idiots."
by Henry Klein
(henrymakow.com)
"Make the Jews world conscious, say their leaders. Make them dream of Palestine and a world state. Don't let them become nationalists in thought. Don't let them consider themselves citizens of any nation except the Jewish dream nation in Palestine. Make them internationalists."
That's what they did with the Jews of Russia and elsewhere in Europe; that's what they are doing to most of the Jews in the United States. The principal medium through which this is being done is political Zionism.
What is political Zionism? In my opinion, it is the curse of Jewry. What was once a beautiful dream for orthodox Jews who might want to spend their declining years in Palestine, has become a lurid nightmare that threatens the extinction of Jews, Christians and Mohammedans alike.
Leading Jews in the United States were once opposed to political Zionism and to a Jewish nation in Palestine. ...It was a capital offence in Russia after the revolution of 1917  to advocate Zionism in that country. Zionism was considered hostile to the economic and political philosophy of communism in that it produced a state within a state.
Leading American Jews felt that Jews should be loyal to the United States and not to an independent nation. Ultimately, these leading Jews changed their views. They adopted the notion they once condemned; not because they believed that American Jews wanted to go to Palestine, but because they were induced to believe that a Jewish nation in Palestine was a symbol of Jewish world power and they favored such power. They did not realize that Jewish political power was broken as a result of the murder of Jesus.

The Balfour declaration in 1917 gave Zionism a great boost. Great Britain promised the Jews a "homeland" in Palestine. In return, the political Zionists helped drag the United States into the first world war. Great Britain had also promised the Arab self-determination and protection in Palestine, against the Turks, two years before.
A "homeland" was not then interpreted as a Jewish state. That interpretation has been put on it by those who have made a business of Zionism and who dream of a recrudescence of world power for Jewry. The Jews as a mass have no such dream and no such ambition. They are content to live in peace and happiness where they are. They have no desire to return to Palestine or to rule the world. Only a handful have that mania. Many Jews now in Palestine would like to leave there if they could.
What has political Zionism led to? It has led to the collection of vast sums of money from Jews throughout the world. It has led to the establishment of pro-zionist organizations in most countries. It has led to the slaughter of Jews in Europe and to the threat of revolt by Moslems against Jews and Christians though there are many Arab Christians.
The entire Moslem world is waiting to drive Jews and Christians out of the middle east and Africa, if Great Britain rescinds its White Paper of 1939 and opens the door to wider Jewish immigration and the further purchase of land by Jews, in Palestine. There are about one and a half million Arabs in Palestine including Christians and about five hundred thousands Jews. The total Moslem population in the middle east and Africa, is over two hundred and fifty million.
There are about five million Jews in the United States, according to Jewish records. In my opinion, that is only half the total number. There are about two and a half million Jews in the City of New York alone and probably another million in New York State. There are probably one million Jews in Chicago and about half a million in Philadelphia. That makes five million. What about Jews in other cities and states? If the Jewish records include only orthodox Jews, than I can understand the total of five million. Otherwise I estimate the total at twice that many.
Of these ten million Jews, not over one per cent, is actively interested in Zionism or really knows what the movement means. All they know about it is what the pro-zionist propagandists tell them in the controlled press and in the publicity stuff they put out in different countries. Besides this, the Jewish people know they are shaken down regularly and systematically for contributions for Palestine. Most Zionist organizations are represented in the Kehillahs [Jewish government]. There are a few organizations and individuals outside the Kehillahs that are propagandizing and grafting on their own account. Cultural and spiritual Zionism has been overcome and suppressed by the political Zionists...
Will the madness for Jewish world power by the handful lead to world conquest or only world destruction? So far it has led only to destruction. Can world conquest by the Sanhedrin compensate for all the destruction that has taken place? If the Moslems revolt, a religious war will  start and further world chaos will follow. There is no telling how long such a war would last and how far further destruction would go. There would probably be no organized system of religion left after it was over.
The Moslems know the Protocols. They have been reading and studying them for at least a generation and their knowledge of their contents has evoked hatred among them. Their representatives protested at San Francisco against granting Jews any further rights in Palestine and they protested several times to the British government. They protested to President Roosevelt. They know that political Zionists are forcing their program in spite of all their protests, and they warn that any overt step to establish a Jewish state in Palestine with or without the aid of any nation, will be met by violent opposition from them. They are against a Jewish state as well as Jewish world power and they intend to stop both.
I warn the Jewish people to heed the Moslem threats. Stop the madness of the Sanhedrin and the graft and propaganda of the political Zionists. They constitute the poison in the Jews' cup.
------
Related-  Henry Klein - Jewish Anti Zionist Martyr
-------------------------- The Sanhedrin's Tyranny
Makow - British Jew Tried to Stop Balfour Declaration
---------  How Zionists Hijacked US Jewry
----------Rothschilds Keep Jews Mental Prisoner
- See more at: https://www.henrymakow.com/#sthash.ucvW8ss1.dpuf

Henry Klein: Zionism is the Curse of Jewry https://www.henrymakow.com/2017/04/political-zionism-curse.html … Like Westerners in general, Jews are pawns in a diabolical plot.