Ding Dong the Bush is Dead

My Catholic friend Martin Hill just wrote to me on the occasion of the death of George H.W. Bush:

AS A CATHOLIC I HOPE NO ONE OF GOD’S CREATURES WILL GO TO HELL. TO WISH SUCH ON ANYONE WOULD  BE EVIL & DEMONSTRATE A FUNDAMENTAL MISUNDERSTANDING OF THE SERIOUSNESS OF WHAT HELL ACTUALLY IS. WHEN I HEARD THE NEWS OF BUSH’S DEATH WE PRAYED FOR HIS SOUL.

OK Martin, I see your point. But for little ole Muslim me, praying for the soul of George H.W. Bush seems a waste of perfectly good prayer space. Talk about a hail Mary!

Then again, Ibn al-Arabi, the all-time greatest mystical philosopher, opined that ultimate everyone goes back to God, i.e. goes to Paradise, and that hell is not quite eternal…it just feels that way. So who am I to say what God will do with the soul of one of the most evil men ever to disgrace the face of planet Earth?

(December 27, 2012) -A few points to start out: NBC is not an impartial media outlet. George H.W. Bush is not a respectable, admirable man or a national hero. And “33” is not an insignificant number- It is quite relevant and meaningful, in some circles at least.

NBC is owned by General Electric, a “defense contractor and the 2nd largest company in world according t...“, which has received over $16 billion dollars in bailouts from American taxpayers. They build and sell engines for the F-16 fighter aircraft and Apache Block III helicopters. For them, war is literally a profit racket; so it makes sense that they would “honor” warmongers.

NBC news far from impartial- they shill for the military-industrial complex and in 2003, fired Pulitzer Prize winning journalist Peter Arnett after Arnett reported the truth from Iraq: “America is reappraising the battlefield, delaying the war against Iraq, maybe a week and rewriting the war plan. The first plan has failed because of Iraqi resistance. Now they are trying to write another plan- So our reports about civilian casualties here, about the resistance of the Iraqi forces, are going back to the United States. It helps those who oppose the war when you challenge the policy to develop their arguments.”

As Steve Watson of PrisonPlanet.comreported in 2010,

“MSNBC is the epitome of the controlled corporate mainstream media, being as it is 80% owned by General Electric, operated by military industrial complex giant General Dynamics, whose primary business comes from supplying arms and weapons systems to the US government and its international allies. It is not and never has been sympathetic to anti-establishment or anti-war activism – this is the same network that cancelled Jesse Ventura’s talk show simply because he opposed the I....

On December 26, NBC reported “George H.W. Bush in ‘guarded condition’ in intensive care, battling elevated fever, spokesman says”.  NBC didn’t even break the story. Twenty days earlier on December 6, THE GLOBE tabloid magazine had already broke the story which hit supermarket checkout racks, with a front cover photo and headline which read “GEORGE BUSH, 88, PLEADS: LET ME DIE AT HOME!” The GLOBE article stated in part, “Hospitalized with a dangerous lung condition, former President George H.W. Bush knows his days are numbered and has asked to be allowed to die at home.”

Featured prominantly in the Johnny-come-lately NBC article was an elaborate slideshow, titled ‘The life and times of George H.W. Bush‘. Coincidentally, the slideshow presentation includes thirty-three photos, summarizing the 41st president’s life. The collection of historic and ‘cute’ photos attempts to present a dignified, affable codger who deserves to be honored. In reality, nothing could be further from the truth.

The number thirty-three holds quite a significance in Freemasonic circles. The numbers 11, 13 and 33 are the Illuminati / Freemason Signature. In their propaganda piece preceding the likely demise of the freemasonic former president, there are many flattering photos of Bush with family, with other politicians, playing horseshoes, etc. But NBC left out several photos of the REAL George H.W. Bush which should have been included. 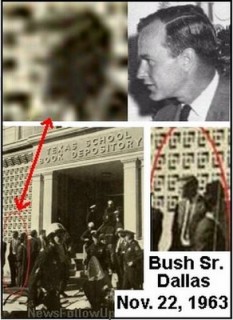 Bush, confessed JFK conspirator Howard Hunt, and Richard Nixon were the only three Americans who claimed not to remember where they were on November 22nd, 1963. Bush, it turned out, was standing in front of the Texas School Book Depository during the shooting of JFK; he later phoned in a bogus “assassination tip” to send the FBI on a wild goose chase.

There are no photos of George H.W. Bush in Dallas on the morning of John F. Kennedy’s assassination standing in front of the Texas Book Depository in Dealey Plaza, but the photos can be seen here. The photo of the FBI memo acknowledging that Bush was a CIA opeative at that time can be seen here: “FBI director J. Edgar Hoover wrote this memo 5 days after the assassination, naming George Bush as a CIA officer… “The substance of the forgoing information was orally furnished to Mr. George Bush of the Central Intelligence Agency and Captain William Edwards of the Defense Intelligence Agency on November 23, 1963, by Mr. V.T. Forsyth of this Bureau.”

There are no photos of George H.W. Bush at the MENA, Arkansas drug running operation with Bill Clinton. The allegation “that Mena is a myth, that the CIA never ran cocaine through the Mena airport, or laundered the proceeds through various Arkansas financial institutions including Morgan Guarantee, Madison S&L, Worthen Bank, and most importantly, the Arkansas Development Finance Authority” is thoroughly debunked here. There is no photo of George Bush with legendary CIA agent Felix Rodriguez a.k.a. “Mr. Gomez” who ran the Mexican portion of the Iran-Contra guns and drug running operation on MSNBC, but the photo can be seen here. [Also here for more information on Mena.]

There are no photos of George H.W. Bush with the underage male homosexual hookers that admittedly toured his White House in 1989, as acknowledged in national newspapers and on the national TV news at the time: See TV News: Call boys in Bush Sr’s Whitehouse and the actual newspaper articles from The Washington Times: HOMOSEXUAL PROSTITUTION INQUIRY ENSNARES VIPS WITH REAGAN, BUSH June 29, 1989. [More info on this matter here and here.]

There are no photos of George H.W. Bush reacting to the half a million innocent Iraqis who died a s a result of of his sanctions during the first Iraq war. Secretary of State Madeleine Albright told 60 Minutes on May 12, 1996 that the deaths were “worth it”:

Lesley Stahl: “We have heard that a half million children have died. I mean, that’s more children than died in Hiroshima. And, you know, is the price worth it?”

Albright: I think this is a very hard choice, but the price -we think the price is worth it.”

Perhaps Bush shares the same views as his wife Barbara, who told ABC’s “Good Morning America” on March 18, 2003 “Why should we hear about body bags and deaths? Oh, I mean, it’s not relevant. So why should I waste my beautiful mind on something like that?” In December 2011, current Defense Secretary Leon Panetta, who was formerly the CIA Director, similarly said that the systematic slaughter of 1.5 million Iraqis and the destruction of their nation was also “worth it”: “As difficult as [the Iraq invasion and occupation] was, and the cost in both American and Iraqi lives, “I think the price has been worth it, to establish a stable government in a very important region of the world”. 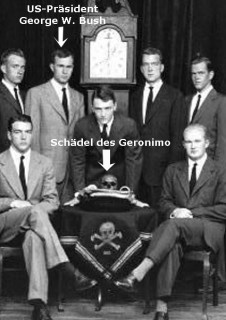 There are no photos of George H.W. Bush at his Masonic Yale Skulll and Bones ‘tomb’ which admitedly has skeletins of dead human babies hanging on the walls: “Dozens of skeletons and skulls, human and animal, dangle from the walls, on which German and Latin phrases have been chiseled (“Whether poor or rich, all are equal in death”) [Skull & Bones Society – A rare look inside Skull and Bones, the... by Alexandra Robbins. See also Cremationofcare skull & bones archive and Bilderberg.org for more details on this matter.]

Bush’s father Prescott, the Nazi financier, and his son, George W. Bush, were also both members of Skull and Bones. In his autobiography, George W. Bush wrote “My senior year (at Yale University) I joined Skull and Bones, a secret society … so secret, I can’t say anything more.” [White House ‘Bonesman’ leads nation into the darkUSATODAY 9/25/02.] In 2004 both George W. Bush and his cousin John Kerry laughed about the secrecy of their Skull and Bones memberships in separate TV interviews, which can be seen here.

NBC included no photos of George H.W. Bush taking part in occult ceremonies at Bohemian Grove performing mock human sacrifies to Molech and worshiping satan with other attendees Newt Gingrich, Henry Kissinger and Arnold Schwarzenegger. But photos of the Bushes, father and son together at Bohemian Grove, can be seen in the Annals of the Bohemian Club (vol 7), 1987-1996. Also inlcuded in the book are images from the occult Cremation of Care ceremony:

“This image from Page 131 shows the ancient Caananite occult ritual, the “Cremation of Care Here you see a smug George W. Bush with his father, Bush Senior (taken in 1995) giving what they call a “lakeside chat” at the Grove. This page also shows Newt Gingrich, another member. The talks are given no less than a dozen yards from the stone idol where “mock” human sacrifices take place. This is the same idol you see featured above in the Cremation of Care ceremony photo.”

For much more information and documentation on this matter, click here.

Speaking of skeletons of dead babies and human sacrifices, there are no photos of George H.W. Bush with his young daughter “Robin Bush” before she mysteriously died at a young age, allegedly from “lukemia”. It is on record that George W. Bush did not go to his sisters funeral. What kind of family doesnt let a brother go to his little sister’s funeral? What did they do with her body? One can only speculate as to how she really died or where her body went. 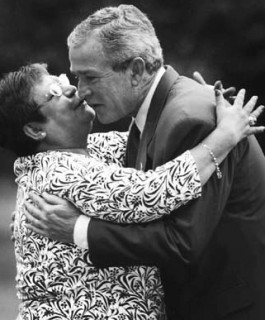 Bertha Champagne, Bush family “babysitter,” gets squeezed by W. She later got terminally squeezed by (name deleted), who crushed her to death with an automobile against the wall of Marvin Bush’s garage.

There is no photo of George H.W. Bush with 62-year-old Bertha O. Champagne, the live-in housekeeper who was ‘crushed to death’ at the Alexandria, Virginia home of Marvin P. Bush. According to Marvin’s statement to police, Bertha went out to her car to retrieve some photos of her and George W. Bush to show to Marvin, on September 29th 2003 . How does one get crushed to death by her own Oldsmobile between the front of her car and a wall anyway? “Champagne was pinned between the car and a small building next to the driveway” the police report stated, with pools of blood and broken glass at the scene. No one was ever arrested or charged in the “accident.” (Oh Bertha, Poor Bertha, what did you see?)