Posted by Gordon Duff on March 10, 2015
Release of intel files on traitors key to global stability


Mr. President:
Political divides within the US now clearly threaten world peace.  Pro-Israeli factions within the US are working, not only to sabotage a nuclear settlement with Iran but go much further.  Recent lapses in judgement and decorum by General Breedlove of NATO, covert US aid to ISIS/ISIL and moves by certain US factions in support of terrorist factions in Libya and across Africa have raised the stakes.
We at Veterans Today, in consultation with staff members and unlisted associates, some former Soviet and Russian intelligence officials known to you, are aware that the intelligence services of the Russian Federation have files in their possession, some kept for many years, that should now be made available.  As our initial request, we ask for the following documents we know to be in Russian keeping
These are only a small percentage of the materials you have available, materials that, quite frankly, will not be of value if world events continue their current levels of deterioration.
Thank you,
Gordon Duff
Senior Editor Veterans Today

Gordon Duff is a Marine combat veteran of the Vietnam War.He is a disabled veteran and has worked on veterans and POW issues for decades.

Gordon Duff is an accredited diplomat and is generally accepted as one of the top global intelligence specialists.He manages the world's largest private intelligence organization and regularly consults with governments challenged by security issues.


Gordon Duff has traveled extensively, is published around the world and is a regular guest on TV and radio in more than "several" countries.He is also a trained chef, wine enthusiast, avid motorcyclist and gunsmith specializing in historical weapons and restoration.Business experience and interests are in energy and defense technology.
Visit Gordon Duff's YouTube Channel
COMMENT FROM THE POSTER of this blog: 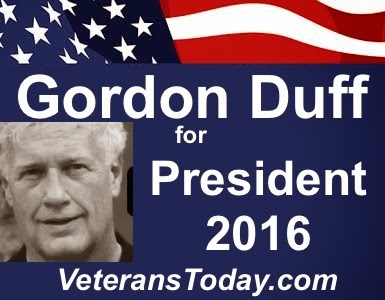 à 19:16
Email ThisBlogThis!Share to TwitterShare to FacebookShare to Pinterest