The Vatican City is the heart of the Catholic church and the Pope (Pontifex Maximus) is the head of the church and the supreme “spiritual” leader of all of the world’s Catholics. But the Vatican hides some of the darkest secrets one can imagine.

Sedes Sacrorum (Latin for Holy Seat), known as the Holy See in English, is the seal of the Vatican City State. 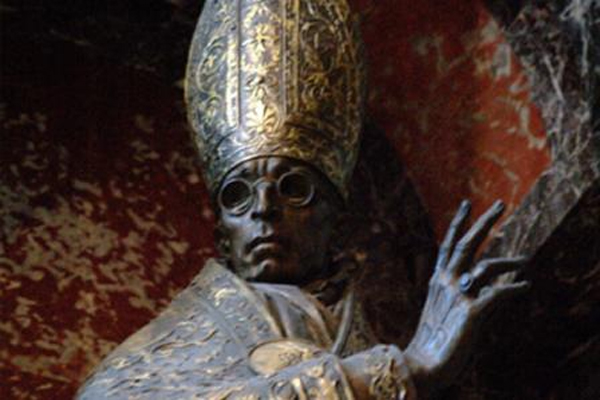 The Roman Cult* which controls the Catholic Church maintain that the first person to use the concept of the Holy See was St. Peter.

This of course, is impossible as the etymology of the word “Sedes” (See) and its associated meaning were not in existence until hundreds of years after the execution of St. Peter in 70 CE at the Siege of Jerusalem.”

*The Roman Cult is a shadow group of blood-thirsty satanists, which was involved in “child sacrifice, burning people alive (since 11th Century CE), demonic worship and absolute celibacy of its lowest priests.

Since the 1st Century BCE, its high priests known as ‘Pontiffs’ — a hereditary position controlled by a handful of ancient families — claimed the ancient pre-Republic title of Pontifex Maximus after the Roman Emperors assumed themselves as high priest of the state cult of Magna Mater (Cybele).

Jealously guarding their pagan heritage and right to sacrifice people to their demon gods, the priestly families were banished from Rome more than once along with the closure of the Vatican temple.

However, during the tumultuous periods in Roman history after the collapse of Rome as the center of the Empire, the pagan high priests assumed the role as community leaders in Rome and during more than one period, openly returned to their pagan practices of child sacrifice, cannibalism and demonic worship as late as 590 to 752, 847 to 872 and even as late as 896, 1057.” [2]

“Under Pope Innocent VIII, the role of the Inquisition and Inquisitor changed to increase their legal and spiritual authority when dispatching ‘heretics’.

Around 1483 Tomás de Torquemada was named Inquisidor General of Aragón, Valencia and Catalonia. His torturers and special militia were then blessed with being sworn into the highest sacred order of the Roman Cult — the SS or the Knights of the Sedes Sacrorum.

As a military order of the Roman Catholic Church, the Knights of the Sedes Sacrorum (SS) were bestowed by the legal orders of the Roman Pontiff on behalf of the Mother Church to wage constant Holy Inquisition against all ‘heretics’, including assassinations, torture and counter-intelligence, to protect the name of the Holy Roman Catholic Church and directly represent the interests of the Holy See as its primary order of Holy Knights — the SS (Sedes Sacrorum or Holy See).

As a spiritual order of the Roman Catholic Church, the SS — were bestowed with the extraordinary Roman Catholic grace of being forgiven for all their mortal sins (therefore can go to Heaven) that “unfortunately” must be done in order to observe its temporal orders.

In others words, the troops of the Grand Inquisitor Tomás de Torquemada were the first religious military order to be granted “immunity” from Hell by the Pope on account of its acts of torture, terror and evil.

However, upon the appointment of Fr Heinrich Himmler S.J. in 1929 to the NSDAP in Germany, a new Nazi SS (Knights of the Sedes Sacrorum) Army of several hundred thousand was created by 1939 to wage the single greatest Inquisition ever undertaken by the Roman Cul t– with over 18 million innocent people burned alive in ovens in Russia and Poland.

The German SS were disbanded at the end of World War II, with the Roman Scroll of the SS being handed to the United States SS (Secret Service/Sedes Sacrorum) by 1945. The United States SS was officially created into a military/spiritual force after the assassination of President William McKinley in 1901.

After the staged gun-fight outside Blair House in 1950, the United States SS have had absolute protection of the President of the United States, holding him a virtual prisoner of the State under the guise of official protection.” [3]

The Hidden Code of the SS

oth the SS and Pope’s Francis coat of arms have the papal mitre in the center, which is a head cover worn by the cardinals and the pope and dates back to the Dagon priests, more than 4,500 years ago.

Seen from the side, the mitre looks like a fish head with open mouth, and this is exactly what it represents. It is the worship of the fish “god”, who allegedly came out of the water and offered great knowledge to the people. The “christian” fish logo represents the same Dagon “god”.

Dagon or Oannes was “a fish god who imparted great knowledge to the people. He taught them how to build cities. He also taught them math and geometric laws, and was credited with giving them all the knowledge that they would ever receive.

At night, he would go back into the sea to spend the night, because he was amphibious.  He had the head of a man; covered by the head of a fish, and had the legs and feet of a man and the torso of a man, but was covered by the scales and tail of a fish.” – Berossus; from ancient fragments (Isaac Preston Cory) [4]

According to the “Lost Book of Enki“, the fish “god” was none other than Ea (later known as Enki), who landed his massive space ship on water — from which he emerged and built the first settlement for the Anunnaki on Earth (Enki was either wearing a space suit, or he is depicted in non-human form. Fascinating!). He named it Edin (the Biblical Eden), which meant “Home of the Gods”.

(It was in the Edin that the city Eridu was established, which meant “the home from afar.” The name, later “migrated” into all major cultures of the world. It was known as Erde in German, Ertz in Kurdish, Eretz in Hebrew and Erthe in Middle English. This means that we still call our planet “the home from afar” to this day). [5]

The founder of this religion was Nimrod — the king of Shinar and the great-grandson of  Noah / Ziusudra, which in turn was the son of Enki by an earthling — hence of “royal” Anunnaki blood. Many of today’s “royal” bloodlines are descendants of Nimrod.

The keys found on both logos and the way they are positioned, refer to a diligently guarded secret. In symbolism, the key represents locked knowledge and/or guarded secrets. But what secrets is the Vatican protecting? The way the keys are positioned is only a small clue, indecipherable to the common people.

Fortunately, the hidden code of the Vatican has been cracked by writer and researcher Wayne Herschel, basing his research on the pictogram puzzle found in the “Key of Solomon” manuscripts.

The Key of Solomon unlocks the mystery behind the home constellations of the “gods”, and it will be of no surprise to my readers to identify them as the Orion’s belt and the Pleiades…the same two constellations pointed out by all advanced civilizations as the home of the gods, and obsessively worshiped by the “elite” ever since.

Further deciphering the secrets of the SS, I will now submit to your attention the cross, which to them probably represents the cross formed by the stars of the Orion constellation. Another theory refers to the cross as representing another of their alleged homes, Nibiru (literally meaning, the planet of the crossing). [6]

The Chi-Rho “Christian” symbol represents the constellations of Orion and the Pleiades:

To the common and decent people, the cross represents a tribute brought to Jesus Christ and His great sacrifice, but as I’ve showed you before, the cross predates Christ’s crucifixion by millennia. To them, it has a different symbolism.

On Pope’s Francis Coat of Arms we can also observe: a sun, an eight-pointed star and a pine cone.

The sun probably represents the star of the gods (presented by Ra/Marduk as his home star).

The eight pointed star represents Melchizedek, who was the king of Salem and a priest of the “highest of all gods”. Some theologians have supposed him to have been Shem, the son of Noah/Ziusudra, and grandfather of Nimrod (which later became the king of Shinar and priest of the fish god, as I have previously explained). In Masonry, Melchizedek is connected with the degree of High Priesthood (high mason rank). [7]

The pine cone is a symbolic depiction of the pineal gland, which is also known as the third eye and the Egyptian eye of Horus:

The name pineal comes from the resemblance of the gland with a pine cone. The pine cone as a symbol of supreme knowledge can be found in numerous ancient cultures (e.g. Babylonian, Egyptian) and the Roman Cult (the secret society that controls the Vatican) highly reveres it. A gigantic statue of a pine cone can be found in the Vatican’s inne....

In conclusion, the Vatican is not a place of love and peace, as one might imagine. It is a place of dark rituals and great secrecy.

Their purpose is to enslave the human species through indoctrination, fear and control. And because people fear what they don’t understand, the influence of the Vatican and the Catholic church is immense — greater than any army, tyrant or government. They are also the greatest financial power on Earth and they will continue to exercise their influence for as long as the human species will continue to sleep.

My next article contains pictures from my trip to the Vatican, which is one of the most important capitals of the “elite” bloodlines.