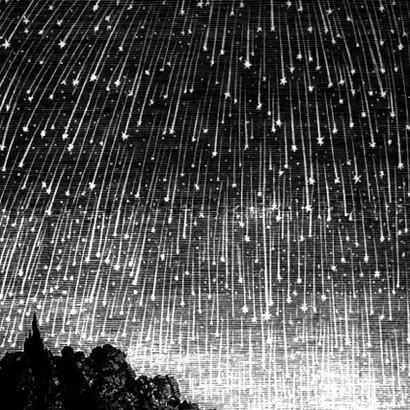 That's the expected peak date for the Quadrantids, a notoriously unpredictable meteor display. In 2009, peak activity is due to occur in the pre-dawn hours of Jan. 3 and will strongly favor western North America. If the "Quads" reach their full potential, observers blessed with clear, dark skies could be averaging one or two meteor sightings per minute in the hour or two prior to the break of dawn.

The Quadrantid (pronounced KWA-dran-tid) meteors provides one of the most intense annual meteor displays, with a brief, sharp maximum lasting but a few hours. Adolphe Quetelet of Brussels Observatory discovered the shower in the 1830's, and shortly afterward it was noted by several other astronomers in Europe and America.

The meteors are named after the obsolete constellation Quadrans Muralis the Mural or Wall Quadrant (an astronomical instrument), depicted in some 19th-century star atlases roughly midway between the end of the handle of the Big Dipper and the quadrilateral of stars marking the head of the constellation Draco. (The International Astronomical Union phased out Quadrans Muralis in 1922.)

According to the International Meteor Organization, maximum activity this year is expected on 4:50 a.m. Pacific Standard Time on Jan. 3. For those across the western half of the United States and Canada, the radiant will soar high in the eastern sky just prior to the onset of morning twilight. Over the eastern United States and Canada, the spike of activity is predicted to come after sunrise.

Quadrantid meteors are described as bright and bluish with long silvery trains. Some years produce a mere handful, but for favorably placed observers, an excellent meteor display may be in the offing; at greatest activity, Quadrantid rates will likely range from 30 to 60 per hour for eastern parts of the U.S. and Canada, to perhaps 60 to 120 per hour for the western United States and Canada. For those in Europe, the shower's sharp peak will likely come long after sunrise. Nonetheless, hourly rates of perhaps 15 to 30 may still be seen.

As far as the moon is concerned, it will not be a factor at all this year. It's a waxing crescent, two days from first quarter phase and will have set around 11 p.m. local time on Friday, Jan. 2, leaving the rest of the night dark for meteor watching.