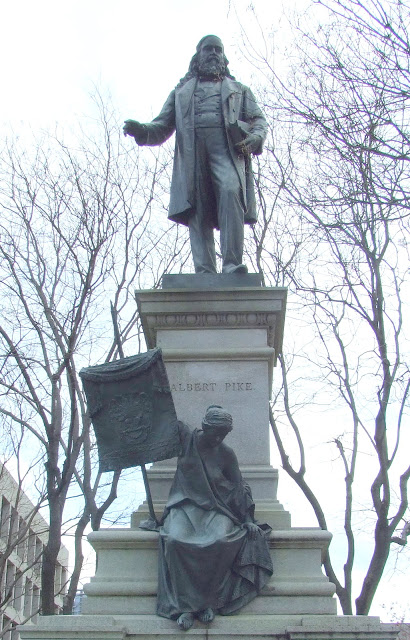 The statue in our nation’s capitol of Confederate General Albert Pike, Grand Master of the Scottish Rite of Freemasonry Southern Jurisdiction — the most powerful masonic organization in the world in Pike’s lifetime.
Albert Pike was a a Confederate Brigadier General in charge of American Indian troops fighting for the Confederacy.
After the war he assumed command of the Scottish Rite of Freemasonry, Southern Jurisdiction. No member of the U.S. government or Union Army, or Federal officials during Reconstruction, were permitted to harm a hair on his head.
Quick as a weasel, shortly after the war he was operating in the North with impunity, freely meeting fellow Freemasons in the abolitionist-citadel of Rochester, New York.
Morals and Dogma, Pike’s magnum opus, was printed and distributed by the tens of thousands to Scottish Rite Freemasons in America. In this book, Pike detailed the true god — or should we say gods — of the Freemasons: the demon deities of ancient Egypt:

"...the BLAZING STAR...Originally it represented SIRIUS, or the Dog-star, the forerunner of the inundation of the Nile; the God ANUBIS, companion of ISIS in her search for the body of OSIRIS, her brother and husband. Then it became the image of HORUS, the son of OSIRIS, himself symbolized also by the Sun, the author of the Seasons, and the God of Time; Son of ISIS, who was the universal nature, himself the primitive matter, inexhaustible source of Life, spark of uncreated fire, universal seed of all beings. It was HERMES, also, the Master of Learning, whose name in Greek is that of the God Mercury. It became the sacred and potent sign or character of the Magi, the PENTALPHA, and is the significant emblem of Liberty and Freedom, blazing with a steady radiance amid the sweltering elements of good and evil of Revolutions, and promising serene skies and fertile seasons to the nations, after the storms of change and tumult…

"The Blazing Star in our Lodges, we have already said, represent Sirius, Anubis, or Mercury (Hermes), Guardian and Guide of Souls…by its genial influence dispenses  blessings to mankind."

A prominent monument to a Masonic Satanist of Pike’s stature is certainly appropriate for the Washington D.C. cesspool. It is undoubtedly revered by certain highly placed Democrat and Republican operatives, as the icon of a man who was an avatar of the aeon of demonic insanity which has become ascendant in the 21st century. It is no wonder that thus far, Pike's statue has been immune to removal, while the strict constructionist, conservative Catholic Supreme Court Justice Roger B. Taney’s* monument was  consigned to oblivion earlier this month.
*Taney (pronounced “Taw-knee”), is despised for his Dred Scott decision. Justice Taney freed his own slaves and lived a model life, but he was a strict constructionist which signifies at its most basic level of denotation, a judge who refuses to engage in Talmudic law-making. (In Pharisaic [Orthodox] Judaism laws are enacted by judicial decision). Strict constructionists reject Talmudic usurpation of the Constitution. Taney ruled in accordance with the law of the land—a Constitution which permitted slavery. The Constitution, tragically, did not grant rights to black people. Justice Taney would not himself make law by overruling the Constitution of the United States. Rather, he heroically “preserved and defended it,” and for his “horrible offense” his name and reputation have been smeared and he has been made a figure of undying contumely.
For further research
Albert Pike and The Sirius Connection
Statue of Judaic Confederate slave owner stands untouched in Florida
Michael Hoffman is the author of Secret Societies and Psychological Warfare, and They Were White and They Were Slaves: The Untold History of the Ens....
Michael’s Truth Mission is made possible in part by donations from truth-seekers.
______________________
Posted by Michael Hoffman at 8/23/2017 11:13:00 AM